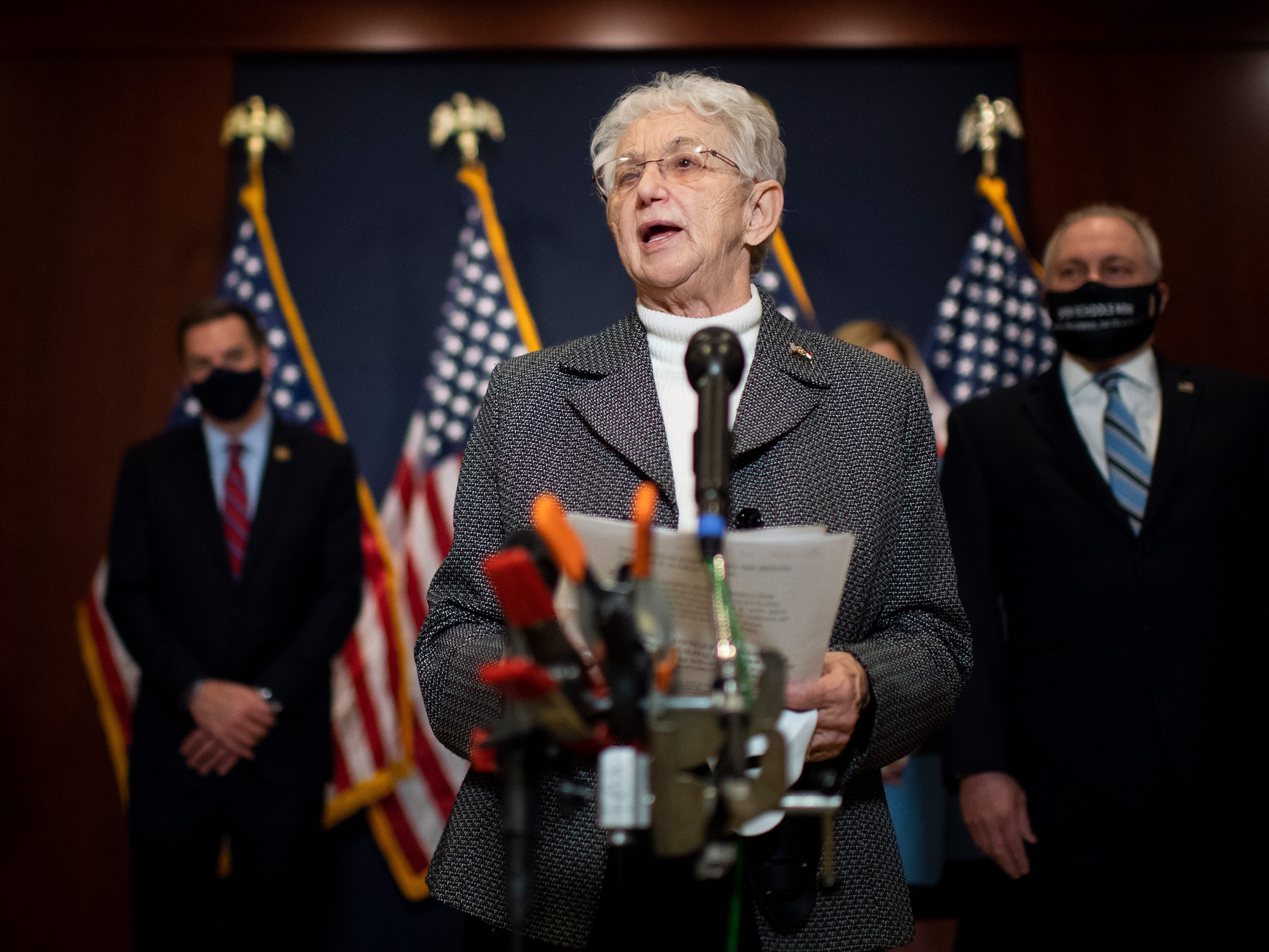 Rep. Virginia Foxx speaking during a news conference with other House Republican members in Washington on March 9, 2021.

Three Republican lawmakers think President Joe Biden is going about the $1.7 trillion student-debt crisis the wrong way — and they have some ideas on what he could do instead.

On Thursday, Reps. Virginia Foxx, Elise Stefanik, and Jim Banks introduced the Responsible Education Assistance Through Loan, or REAL, Reforms Act, which is intended to act as an “alternative” to proposals the Education Department has put forth to reform student-loan programs.

The bill proposes a series of actions to help the borrowers “most in need,” a fact sheet said, by preventing interest from spiraling on income-driven repayment plans, capping borrowing for graduate students, and ending the Public Service Loan Forgiveness program for new borrowers, which the fact sheet said costs taxpayers and favors those with high incomes.

“The Biden administration has been engaging in mass student loan forgiveness behind Americans’ backs without the authorization of Congress,” the three lawmakers said in a statement. “In total, to date, the President has already forgiven, waived, or canceled at least $217 billion in student loans through the unlawful abuse of his executive pen. Instead of placing the burden of this broken student loan system on the shoulders of American taxpayers, we are introducing this bill to fix the system.”

Biden has extended the pause on student-loan payments four times. He has also wiped out student debt for targeted groups of borrowers, such as those defrauded by for-profit schools and those with disabilities. And he is now in the process of deciding another extension, along with broad student-loan forgiveness — reports say $10,000 in relief for those making under $150,000 a year. With those announcements expected this month, Republican lawmakers have been ramping up criticism on the proposals, with this bill being the latest of those efforts.

Specifically, the Republicans are proposing to:

They also want to end interest capitalization, which is when accrued interest is added to the original loan balance, and future interest grows based on that higher amount. Recently, Biden’s Education Department also proposed ending that, as part of its rulemaking process — a process that the Republican lawmakers want to ban in their bill if it continues without congressional approval.

Some of the proposals in the bill are not new. Republican lawmakers have previously introduced legislation to ban the president from canceling student debt and continuing to extend the pause on payments, and Foxx has criticized the confusion with income-driven repayment plans after the release of an NPR investigation highlighted their mismanagement.

But Biden’s Education Department is planning to release a new income-driven repayment plan in the coming weeks, and it’s also in the process of carrying out PSLF reforms from last year, one of which included a waiver that runs through October 31 that allows any past payments a borrower made — even those previously deemed ineligible — to count toward the forgiveness progress. The waiver has so far brought $8.1 billion in relief to 145,000 borrowers.

The Republicans’ proposals are emblematic of criticisms they’ve had toward the student-loan program in past months, especially when it comes to the cost. A report from the Government Accountability Office last week found that the Education Department cost estimates for the federal student-loan program were off by $311 billion, with the program expected to generate revenue loss rather than profit. But while the GOP has viewed the solution to those costs as ending Democrats’ broad relief efforts, the chair of the House education committee, Bobby Scott, said the focus should be on making student loans work for everyone.

“Rather than cast blame on previous Administrations — two of which were Republican and two of which were Democratic — we should focus on solutions,” Scott said in a statement. “The solution to this problem is not to eliminate the student loan program, but — rather — we should work together to address the rising cost of college, restore the value of the Pell Grant, and make meaningful reforms to the student loan program.”