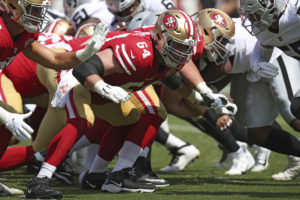 The roster carousel continues to turn for the 49ers. San Francisco cut down to their initial 53-man roster yesterday, and had a league-high three players claimed off waivers. The players who were claimed included wide receiver Nsimba Webster by Chicago, rookie linebacker Justin Hilliard by the New York Giants, and offensive lineman Dakoda Shepley by Seattle.

Once the waiver process was completed, the attention shifted to filling out their practice squad. Per NFL rules, each team is allowed to carry up to 16 players with up to six of them being vested veterans. The 49ers are also eligible to have one additional player due to participating in the NFL’s International Player Pathway Program.

Practice squad players are eligible to sign to the active roster during the season and also can each be promoted twice on game days without having to clear waivers before being returned to the practice squad.

The 49ers announced the following 13 players who were with the team during training camp to their initial practice squad:

Jack Hammer is a lifelong 49ers fan who shares insights on the team, and leads discussion on all football and team topics. Follow Jack on Twitter @JackHammer_NFL and subscribe to his YouTube Channel, YouTube.com/c/JackHammer49.