Women watch an Al Jazeera obituary report on TV at the family home of Al Jazeera journalist Shireen Abu Akleh in the Palestinian neighborhood of Beit Hanina in Israeli-occupied east Jerusalem on Wednesday, after she was killed as she covered an Israeli army raid on Jenin refugee camp in the occupied West Bank. 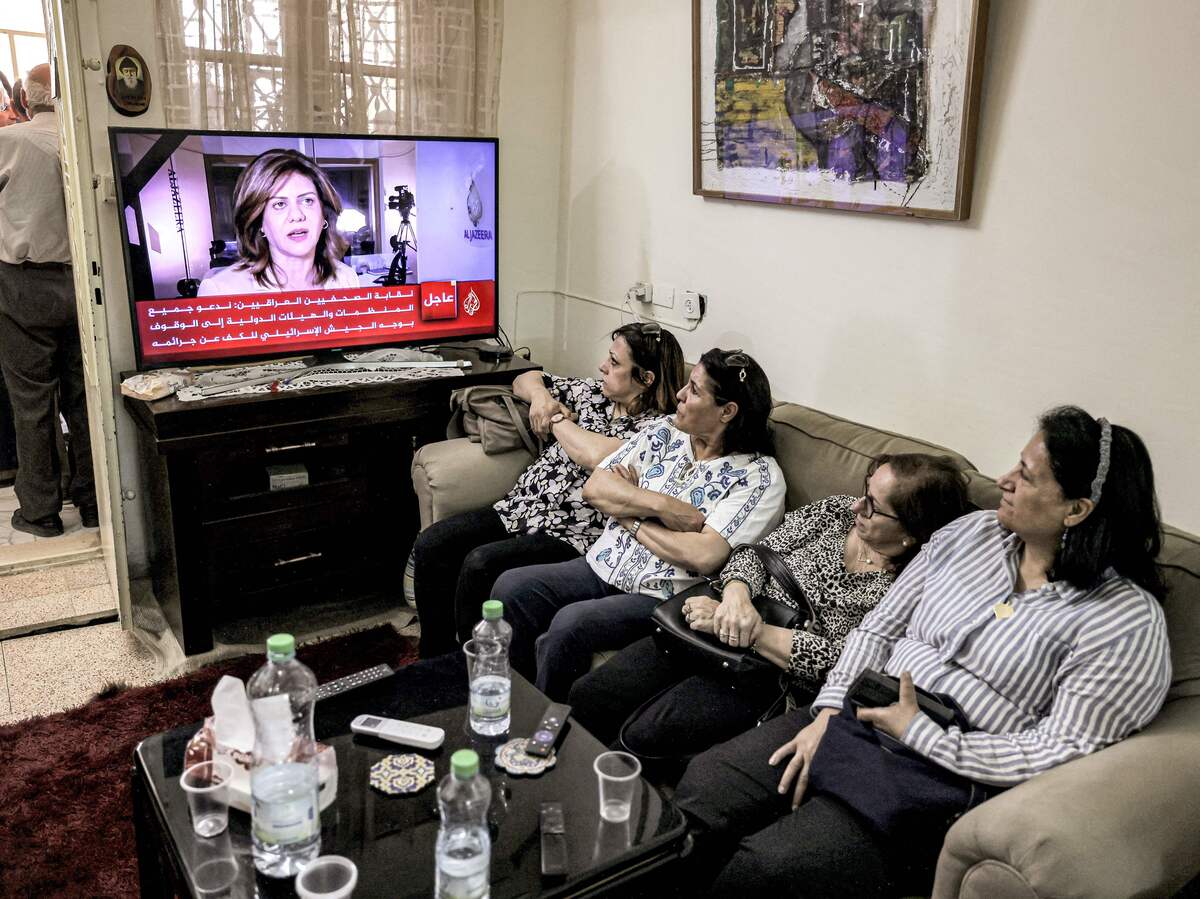 Women watch an Al Jazeera obituary report on TV at the family home of Al Jazeera journalist Shireen Abu Akleh in the Palestinian neighborhood of Beit Hanina in Israeli-occupied east Jerusalem on Wednesday, after she was killed as she covered an Israeli army raid on Jenin refugee camp in the occupied West Bank.

Veteran journalist Shireen Abu Akleh was shot and killed while reporting on an Israeli army raid in the Israeli-occupied West Bank for Al Jazeera, the TV network reported on Wednesday. Al Jazeera says an Israeli force killed Abu Akleh; Israel’s government says it believes she may have been hit by Palestinian gunfire.

Abu Akleh, a 51-year-old U.S. citizen, had been covering a military raid on the Jenin refugee camp “when she was shot in the face by a single bullet, despite wearing a press vest,” Al Jazeera said. It said the TV correspondent had been “assassinated in cold blood” after she was targeted by the Israeli forces.

Israeli Prime Minister Naftali Bennett issued a statement saying, “According to the information we have gathered, it appears likely that armed Palestinians — who were firing indiscriminately at the time — were responsible for the unfortunate death of the journalist.”

Al Jazeera producer Ali Samoudi was also shot while covering the raid. From his hospital bed, he told NPR that the TV network’s team had arrived where Israeli soldiers were surrounding a Palestinian home in the Israeli-occupied West Bank.

They walked past soldiers who allowed them to proceed, he said. The journalists were carrying camera equipment and wearing blue vests clearly marked with the word “PRESS.”

After they passed, he said, three shots rang out.

Samoudi said the second shot him in the back, and the third hit Abu Akleh in the head.

The producer disagreed with Israel’s assessment that Palestinian gunmen were likely responsible.

“There were no resistance fighters around us,” Samoudi said, according to a translation by Middle East Eye. “When there are Palestinian fighters shooting, we don’t go.”

Another witness, Palestinian journalist Shatha Hanaysha, said journalists had been cornered when Abu Akleh was shot. Her colleague’s death was an assassination, she said.

“We stood together in a collective way as journalists, then we started moving. We were shocked by the live ammunition fired at us,” she told Al Jazeera. “We reached an area that did not allow us to withdraw.”

The gunfire came from snipers, she said.

“The one that killed Shireen was intended to kill her because he shot the bullet at an area of her body that was not protected,” Hanaysha added.

Israel’s military said it “is investigating the event and looking into the possibility that journalists were hit by the Palestinian gunmen.”

The Israel Defense Forces said the raid was mounted “to apprehend terrorist suspects” in the Jenin camp. It acknowledges that its soldiers opened fire, but it said that only happened after “tens of Palestinian gunmen fired at and hurled explosive devices toward the soldiers.”

When the soldiers opened fire, it said, they shot “toward the gunmen and hits were identified.”

The Foreign Press Association in Israel and the Palestinian territories says it is “appalled and deeply shocked” by the killing of Abu Akleh. It also said the investigation into her death should be immediate and transparent.

“Her death is a tremendous loss for journalism, and the FPA offers its deepest condolences to Al Jazeera and her family,” the association said. (Editor’s note: NPR is a member of the organization.)

The International Federation of Journalists also condemned the killing and demanded an investigation, as did Reporters Without Borders.

U.S. Ambassador to Israel Tom Nides encouraged a “thorough investigation into the circumstances” of the journalist’s death.

The Downton saga rekindles that old feeling, even in A New…