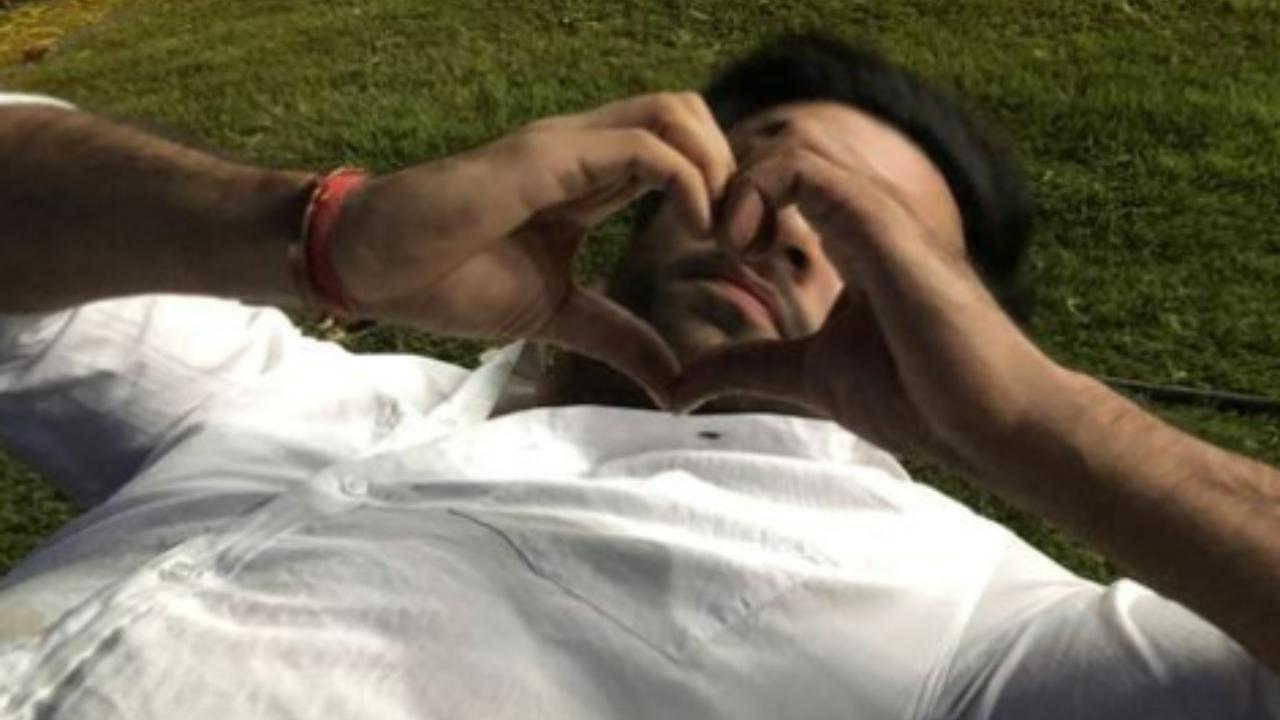 Actor Alia Bhatt treated her fans with an adorable picture of Ranbir Kapoor on Thursday on her social media handle. Recently, Alia did a Q&A session on her Instagram story and during the session, one of the fans asked the `Raazi` actor, the best trait of Ranbir as a co-star? To which the mom-to-be replied with a cute picture of her husband with the caption “Ranbir is the easiest person to work with! He`s so punctual! He`s so giving as an actor! He never leaves the set! His discipline is beyond brilliant!!!”

In the picture, the `Yeh Jawaani Hai Deewani` actor was seen lying on the ground in a white shirt and made a heart gesture with her fingers for his ladylove. Alia added, “Also he would make these little hearts for me in between shots!” Her caption indicated that the picture is from the couple`s upcoming movie `Brahmastra` sets.

Also Read: Alia Bhatt replies to question about working during pregnancy: Need no rest, will work till 100

`Brahmastra- the Trilogy`, is a 3-part film franchise and will have a pan-India release, across five different languages – Hindi, Tamil, Telugu, Malayalam, and Kannada. It also stars Amitabh Bachchan, Mouni Roy, and Nagarjuna Akkineni, among others in pivotal roles.

The upcoming film has been in limelight from the very day it was announced and it took over four years to get the production work done on it. Now after much delay due to various reasons, the movie is ready to hit the theatres on September 9 in 2D and 3D. A few hours ago, `Brahmastra` makers unveiled a teaser of the second song from the most anticipated film after the love song `Kesariya`.

Titled `Deva Deva`, the teaser video begins with Ranbir Kapoor, as Shiva praying to God. He is also seen explaining the importance of light to his love Alia Bhatt who plays the role of Isha in the film.

On the work front, Alia will be seen in `Rocky Aur Rani Ki Prem Kahani`, which is being helmed by none other than Karan Johar. `Rocky Aur Rani Ki Prem Kahani`, also featuring veteran stars Dharmendra, Jaya Bachchan, and Shabana Azmi, is set to arrive in cinema halls next year. She will also be seen in `Darlings`. Produced by Gauri Khan, Alia and Gaurav Verma, `Darlings` marks the feature film debut of director Jasmeet K Reen. Actors Shaifali Shah, Vijay Verma, and Roshan Mathew are also a part of the project.

This story has been sourced from a third party syndicated feed, agencies. Mid-day accepts no responsibility or liability for its dependability, trustworthiness, reliability and data of the text. Mid-day management/mid-day.com reserves the sole right to alter, delete or remove (without notice) the content in its absolute discretion for any reason whatsoever