All is quiet among newly studied Centaurs 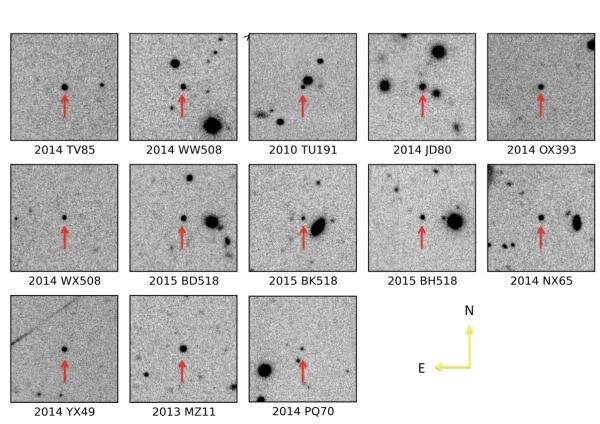 Often, the squeaky wheel, or at least the shiniest object, seems to get all the attention. In a new study led by PSI Research Scientist Eva Lilly, it is the inactive Centaurs that take center stage and illuminate why other Centaurs may be so flashy. Centaurs are icy objects out between the orbits of Neptune and Jupiter that in some cases display comet-like tails and jets. This somehow happens despite being located where it is too cold for this kind of activity to occur due to normal solar-driven sublimation processes. Instead, changes to object’s orbits or other interactions may be the force driving some Centaurs to become active like comets.


This work appears in the Planetary Science Journal, and is titled “No Activity among 13 Centaurs Discovered in the Pan-STARRS1 Detection Database.” In addition to Lilly, PSI researchers Henry Hsieh and Jordan Steckloff also collaborated on this work.

In doing this research, Lilly and her team were not looking for inactive Centaurs. Instead, objects were drawn from a list of 29 Centaurs recently discovered in the Pan-STARRS1 survey, and selections were based on the ability to observe the Centaurs with the Gemini North telescope in Hawaii during the planned time of observations, and if they would be near their closest approach to the Sun around the time of observation. Because these criteria were based strictly on object positions, they expected that any activity that is due strictly to the Sun’s heating effects should be easily detected.

Active Centaurs are clustered within a distance of about 14 Astronomical Units from the Sun, which is a little bit beyond Saturn. An AU is the distance from the center of the Sun to the center of Earth. “That gives us a hint on what makes Centaurs turn on,” Lilly said. “Some models suggest Centaurs contain amorphous water ice, which is very special, because it does not have crystalline structure like the ice here on Earth, and its structure allows it to trap a large amount of gas in between its molecules during the formation of the body. When the body reaches warm enough parts of the Solar System (at around 14 AU), the ice undergoes a rapid phase transition from amorphous to crystalline structure where it releases the trapped gasses.”

Prior to this work, many researchers thought the release of gasses as water crystallizes was an exothermic process that would release the energy necessary to make Centaurs active. This work confirms alternative lab data that suggests that the crystallization process doesn’t release heat. Centaur activity isn’t triggered by this phase change specifically. Instead, Lilly explains, “The escaping gas from the amorphous water ice builds up pressure, which can in turn open sinkholes or cause landslides exposing other ices that will sublimate and create visible coma. This pressure can be so great it could eject boulders or chunks of the Centaur, similarly to what was observed during the outburst of Centaur Echeclus in 2005.”

This work suggests that landslides and other dynamic surface events triggered by the release of gas may in turn trigger activity that looks comet-like but isn’t predictable like in comets, and can occur long after the Centaur passed its perihelion – the closest point to the Sun. At the same time, not every object in the Centaur region will have the kind of orbit that would allow the activity to start. Based on their analysis of Centaur orbital evolution, Lilly and her team suggest that sudden changes in the shape of the orbit, caused by close encounters with giant planets, can jump start the activity on previously quiescent Centaurs. Even an inward shift of 0.5 AU could cause enough of a thermal wave to trigger additional crystallization and ultimately explosive gas buildup in a comet’s interior. Therefore the orbital evolution is a key puzzle piece in building a picture of a Centaur’s life cycle.

The objects in this study have had steady orbits for at least the past ten thousand years, and dynamically appear to have been stable for far longer. It may be that they were active in the past, after arriving at their current locations. They also may one day become active when their orbits are changed once again. Centaurs are transitory objects; they start their lives as Kuiper Belt or Oort cloud objects in the outer Solar System, and through a variety of interactions are driven into orbits closer to the Sun. Once located between Neptune and Jupiter, their days are limited, and it is believed that interactions with these two giant worlds fling Centaurs into the inner Solar System within 10 million years of their arrival. Whatever the future of these 13 Centaurs may be, they currently remain quiet, and their silence tells us Centaur activity is far more complex than simple heating.

The post All is quiet among newly studied Centaurs appeared first on Samachar Central.