Shortly after the dinosaurs were wiped out, a bizarre beast roamed the Earth. About the size of a sheep, this ancient mammal looked like a mashup of modern relatives. Some researchers call it “ManBearPig.” It had five-fingered hands, a bearlike face and the stocky build of a pig. But perhaps stranger than its appearance was this animal’s superfast life cycle. Fossils now show that the creature was born highly developed, then aged about twice as fast as expected.

This mix of traits could have led to many rapid generations of bigger and bigger babies. If so, that may help explain how some mammals took over the world after dinosaurs went extinct. Researchers shared those findings online August 31 in Nature. 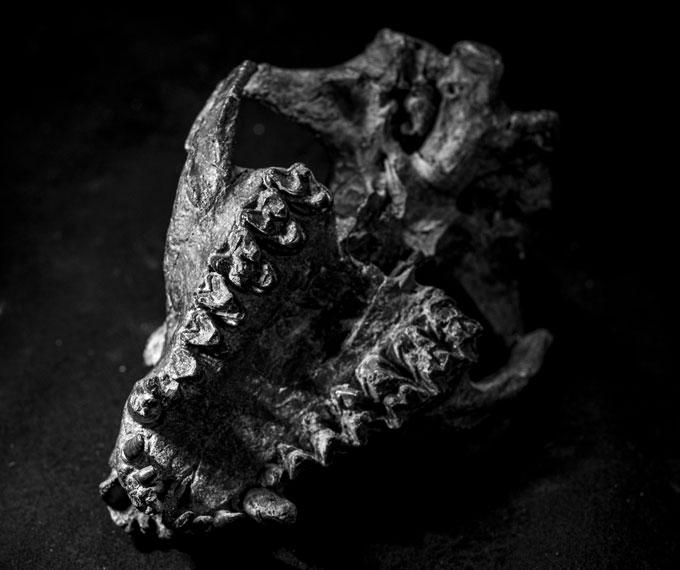 This photograph of a P. bathmodon skull reveals its teeth, which had sharp ridges and grooves for chewing plants.G. Funston

During the age of the dinosaurs, mammals “only got as large as a domestic cat,” notes Gregory Funston. He’s a paleontologist at the Royal Ontario Museum in Toronto, Canada. But an asteroid killed off all nonbird dinosaurs about 66 million years ago. After that, “we see this huge explosion in mammal diversity,” Funston says. At the same time, “mammals start to get really big.”

One type got really big. Those are mammals whose babies develop mainly in their mother’s womb, fed by a placenta (Pluh-SEN-tuh). (Some others mammals, such as platypuses, lay eggs. Mammals called marsupials, meanwhile, give birth to tiny newborns that do much of their development in their mother’s pouch.) Today, placentals are the most diverse group of mammals. They include some of the world’s largest creatures, such as whales and elephants.

Scientists have long wondered why placentals rose to dominance after the dino doomsday. Researchers suspected that placental mammals’ long pregnancies and well-developed newborns played a key role. But it was unclear how long ago this all evolved.

Mapping the life of ‘ManBearPig’

For clues about the life cycles of ancient mammals, Funston and his colleagues turned to the ManBearPig, or Pantolambda bathmodon. A plant eater, it lived about 62 million years ago. It was one of the first large mammals to appear after the dinosaur apocalypse.

Funston’s team studied fossils from the San Juan Basin in New Mexico. Their sample included partial skeletons from two P. bathmodon and teeth from several others. 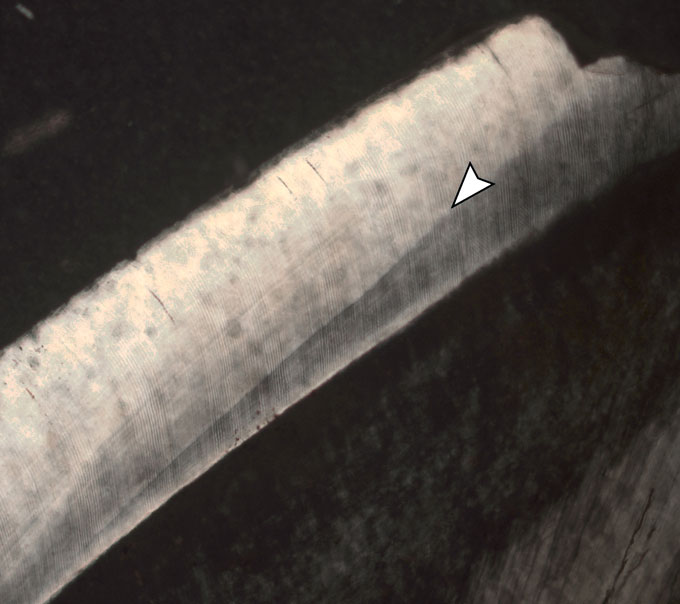 A close-up of the enamel layer in a P. bathmodon tooth reveals a distinct line of zinc enrichment (arrow). This zinc deposit was caused by changes in the animal’s body chemistry when it was born.G. Funston

Daily and yearly growth lines in the teeth created a timeline of each animal’s life. On that timeline, chemicals recorded when the creature went through major life changes. The physical stress of birth left a line of zinc in the tooth enamel. Barium in that enamel spiked while an animal was nursing. Other features of the teeth and bones showed how fast P. bathmodon grew throughout its life. They also marked each animal’s age when it died.

This species stayed in the womb for about seven months, the team found. It nursed for just a month or two after birth. Within a year, it reached adulthood. Most P. bathmodon lived two to five years. The oldest specimen studied died at age 11.

P. bathmodon’s pregnancy was much longer than those seen in modern marsupials and platypuses. (The gestation periods for those mammals are mere weeks.) But it was similar to the months-long pregnancies seen in many modern placentals.

“It was reproducing like the most extreme placentals do today,” Funston says. Such “extreme” placentals include animals like giraffes and wildebeests. These mammals are on their feet within minutes of birth. P. bathmodon gave birth to “probably just one baby in each litter,” Funston says. “That baby had a full set of teeth already in the mouth when it was born. And that means it was probably born with fur in place and with open eyes.”

But the rest of P. bathmodon’s life cycle was very different from that of modern mammals. This species stopped nursing and reached adulthood faster than expected for an animal of its size. And its longest observed lifetime of 11 years was only about half of the 20-year lifespan expected for so massive a creature. 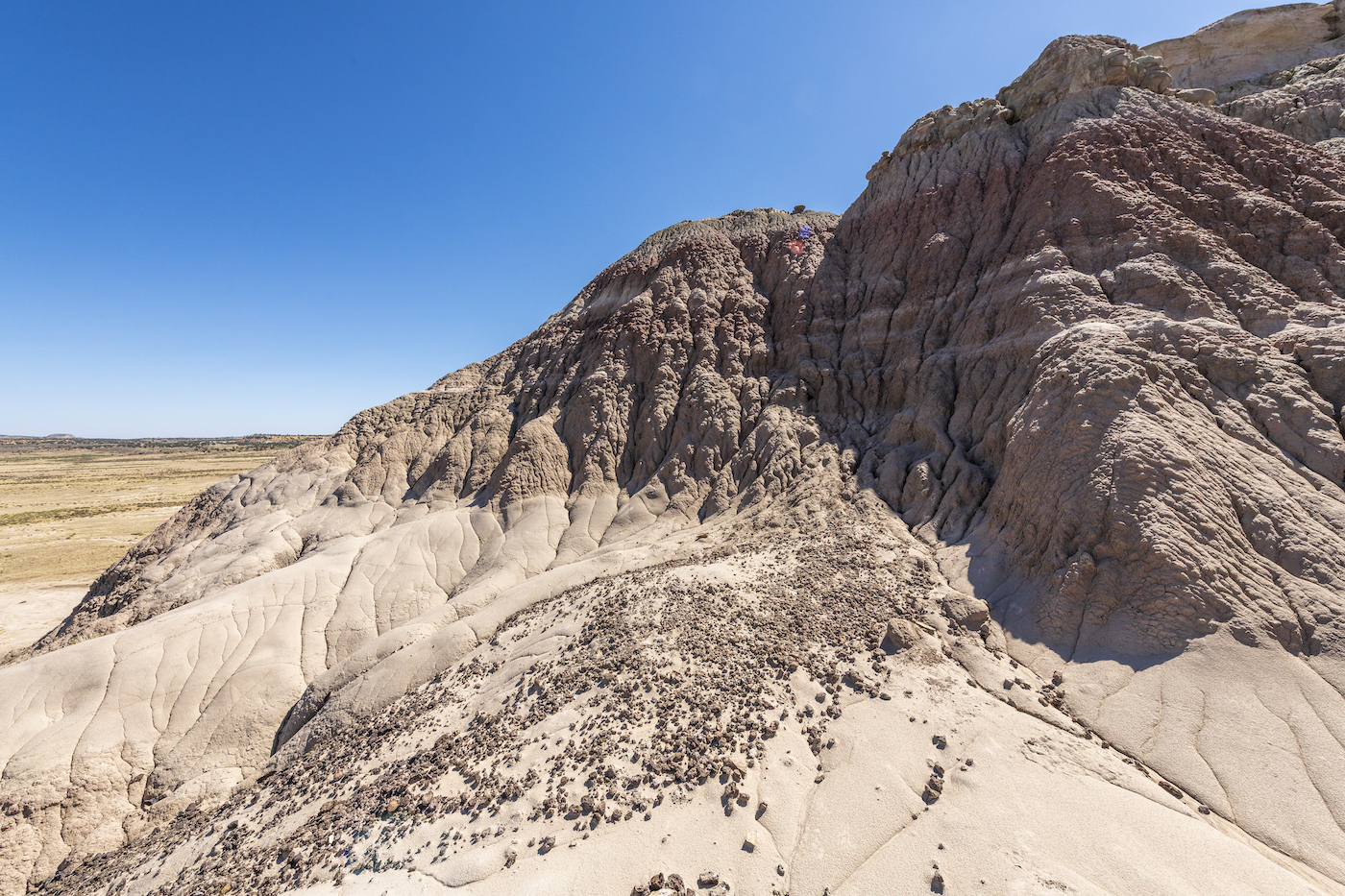 The P. bathmodon fossils examined in the new study were unearthed at this site in New Mexico. G. Funston

ManBearPig’s “life-fast, die-young” lifestyle may have helped placental mammals in the long run, says Graham Slater. He’s a paleobiologist in Illinois at the University of Chicago. He did not take part in the new study. “These things are going to be kicking out new generations every year and a half,” he says. “Because they’re having that rapid generation time,” he reasons, “evolution can just act faster.”

Longer pregnancies could have led to bigger babies. Those babies could have grown into bigger adults. And those adults could have had bigger babies themselves. If P. bathmodon lived life on fast-forward, many such generations would pass quickly. The result? “You’re going to get bigger and bigger animals very, very quickly,” Slater says.

But no single species can tell the story of how mammals took over the world. Future studies should find out whether other mammals around this time had a similar life cycle, he says.