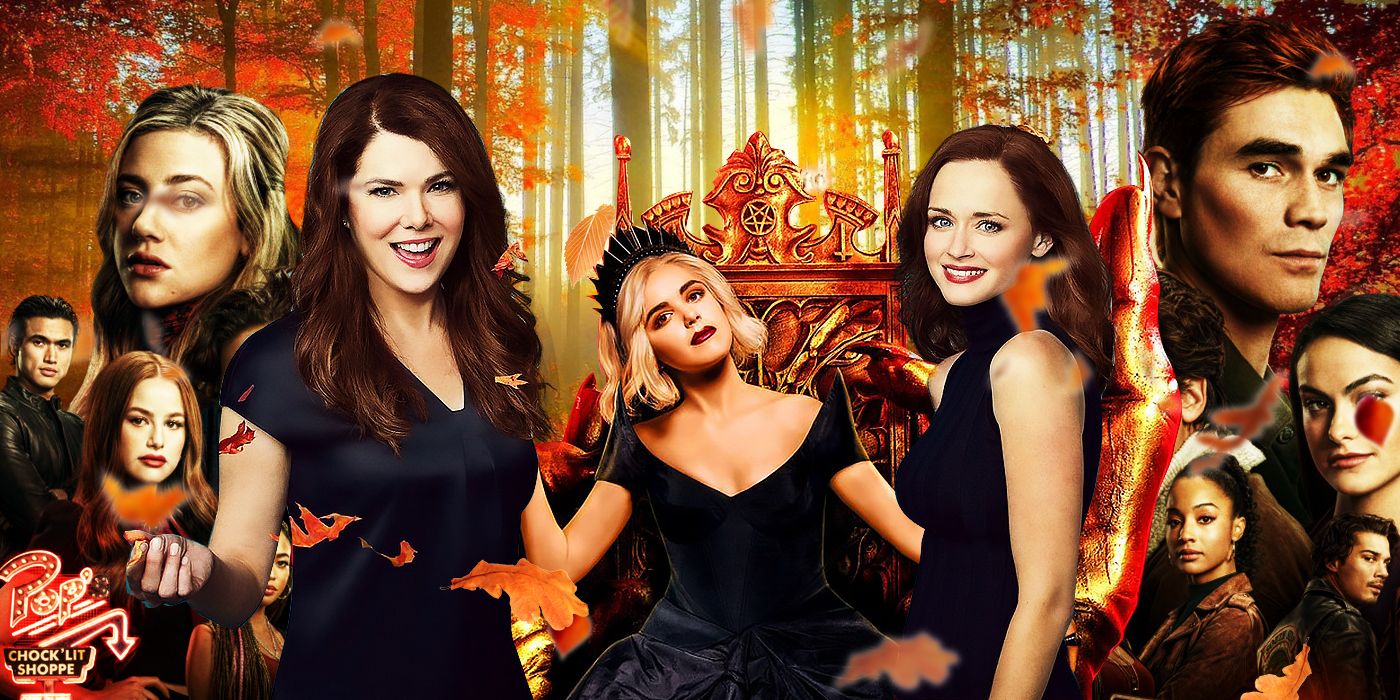 Fall is right around the corner, and we all know what that means: It’s time to dig out your sweaters, sip on a hot drink, and settle in for the night with some great TV. Whether you’re looking for a warm, feel-good comedy to binge on the weekend or a shiver-inducing horror series to prepare for the spooky season, this list of shows will definitely get you in the fall spirit.

RELATED: 8 Cartoons Horror Fans Are Sure to Love

Whether you’re watching for the first time or re-watching in preparation for the long-awaited Season 4, Netflix’s Stranger Things has got it all: a nostalgic ‘80s vibe, a lovable gang of kids reminiscent of The Goonies, and some straight-up terrifying monsters from The Demogorgon to The Mind Flayer. It is never too late to start watching Stranger Things, and the gloomy fall nights are the perfect time to dig out your blankets from the closet and never leave your couch (unless it’s for a snack break).

With Season 3 of Sex Education dropping on Netflix on September 17, now is the perfect time to catch up on the first two seasons. The British comedy-drama follows Otis Milburn (Asa Butterfield), high school student and son of sex therapist Jean Milburn (Gillian Anderson). Otis opens up an underground sex clinic at school along with his classmate Maeve Wiley (Emma Mackey). Sex Education is a lovely, surprisingly thoughtful show that celebrates sex positivity in a way that is empathetic, responsible, and hilarious all at once. While Otis is the protagonist, the show follows the lives of many students, teachers, and parents at Moordale High, so watching the show feels exactly like catching up with all of your classmates you haven’t seen over the summer. The crisp fall air is kicking in, new relationships are blooming — who knows what drama awaits? Sex Education is the sex education teacher we all need that will make you laugh, cry, and occasionally cringe this fall. And as an extra bonus, it has an excellent soundtrack!

It would be sheer foolishness to not include The Twilight Zone on this list. The classic anthology series that changed television, The Twilight Zone exists in a genre entirely of its own. A unique blend of horror, science fiction, mystery, and suspense, The Twilight Zone has over 150 episodes you can binge this fall season. Check out episodes like “Night Call,” “The Hitch-Hiker,” and “Nightmare At 20,000 Feet” if you’re already gearing up for the spooky season.

It is no secret that The CW’s Riverdale had some… questionable storylines in the last few seasons (so much singing, so much Archie stupidity). That being said, the teen drama serves up the quintessential recipe of the perfect fall show: high school setting, teen romance, and a dash of murder. Sure, Riverdale might sometimes leave you wondering what on earth you just watched, but it will most definitely keep you entertained this fall.

If you’re looking for something dark and suspenseful without the camp and glitz of the Archieverse, Bates Motel is for you. The psychological horror drama acts as a contemporary prequel to the 1960 Hitchcock classic Psycho. Featuring outstanding performances by Freddie Highmore as Norman and Vera Farmiga as his mother Norma, Bates Motel is an unsettling origin story that shows how Norman and Norma’s intensely close relationship gradually leads to the unraveling of Norman’s psyche and the lethal blossoming of his alternate personality, “Mother.” Before Norma was an ancient skeletal corpse in Psycho, she was a possessive, manipulative mother who would stop at nothing to keep Norman all to herself. Bates Motel paints Norman as a surprisingly sympathetic figure, a shy but troubled teenage boy who never got the help he truly needed and was smothered by Norma. Bates Motel is as captivating as it is unnerving, a good one to get you in the mood for the Halloween season.

The cult classic that was infamously cancelled too soon, Freaks and Geeks is a one-season wonder that is often deemed one of the greatest TV shows of all time. Freaks and Geeks is the ultimate teen comedy-drama with an honest, introspective narrative that reflects the joy and pain of adolescence and what it means to be an outsider. Whether you’re returning to school or reflecting on your old school days, Freaks and Geeks will make you feel like you’re back walking the hallways this fall.

A Series of Unfortunate Events

Based on Lemony Snicket‘s book series of the same name, A Series of Unfortunate Events follows the Baudelaire orphans, Violet (Malina Weissman), Klaus (Louis Hynes), and Sunny (Presley Smith) as they struggle to find a suitable guardian and escape the dastardly clutches of the treacherous Count Olaf (Neil Patrick Harris), a failed thespian and con artist who is desperate to get his hands on the Baudelaire fortune. A Series of Unfortunate Events is both whimsical and dreary as the Baudelaires find themselves in endless peril, whether it is narrowly escaping being eaten alive by lions or being burnt at the stake by an angry mob with pitchforks. The literary, black comedy-drama is the perfect show to watch as the fall season starts to kick in (not to mention that Patrick Warburton’s spot-on performance as Lemony Snicket will help you brush up on your vocabulary).

Twin Peaks has everything you could want in a fall show: a gloomy setting, a murder mystery in a small town, and a cast of eccentric, but usually endearing characters. In this cult classic, FBI Special Agent Dale Cooper (Kyle MacLachlan) travels to the small town of Twin Peaks, Washington to investigate the murder of a teenage girl, Laura Palmer (Sheryl Lee). Twin Peaks is packed with eerie and unsettling visuals — it is a David Lynch creation after all — that will leave you both entranced and wildly confused; the perfect combination for a binge-worthy show for the fall season. But fair warning: the late Frank Silva‘s performance as the iconic Killer BOB will haunt your dreams for the rest of your lifetime.

What would this list be without the quintessential fall show, Gilmore Girls? Whether it’s the sight of Rory’s (Alexis Bledel) Chilton uniform or the smell of fresh coffee at Luke’s Diner, it somehow feels like it is perpetually autumn in the small town of Stars Hollow. Watching (or re-watching) Gilmore Girls at the start of fall season feels like finally pulling on your favorite comfy sweater after months of waiting for the leaves to change colors. Lorelai (Lauren Graham) and Rory may crackle with endless caffeine-induced energy and talk at warp speed, but Gilmore Girls will still make you feel aglow with that warm, relaxed fall spirit.

KEEP READING: ‘Dickinson’ Will Return for Third and Final Season This Fall on Apple TV+

Kevin Feige on ‘Shang-Chi,’ the Blip Easter Egg to Look Out for, ‘Captain America 4,’ ‘Loki’ Season 2, and More

He also wants you to know those are not Pokémon characters in the 3rd act of ‘Shang-Chi.’

Rae Torres is a TV features writer and graduate student. When she isn’t in the classroom, you can find her hanging out with her husband, son, and their three cats, Raisin, Gollum, and Smeagol. Interests include reading all Cosmere-related content from fantasy author Brandon Sanderson, waiting for McDonald’s to release their plant-based burger, and aggressively defending Taylor Swift.

The post Best Fall Shows to Watch to Get You in the Autumn Spirit appeared first on Gamers Grade.

Search more articles here: Best Fall Shows to Watch to Get You in the Autumn Spirit

Read original article here: Best Fall Shows to Watch to Get You in the Autumn Spirit