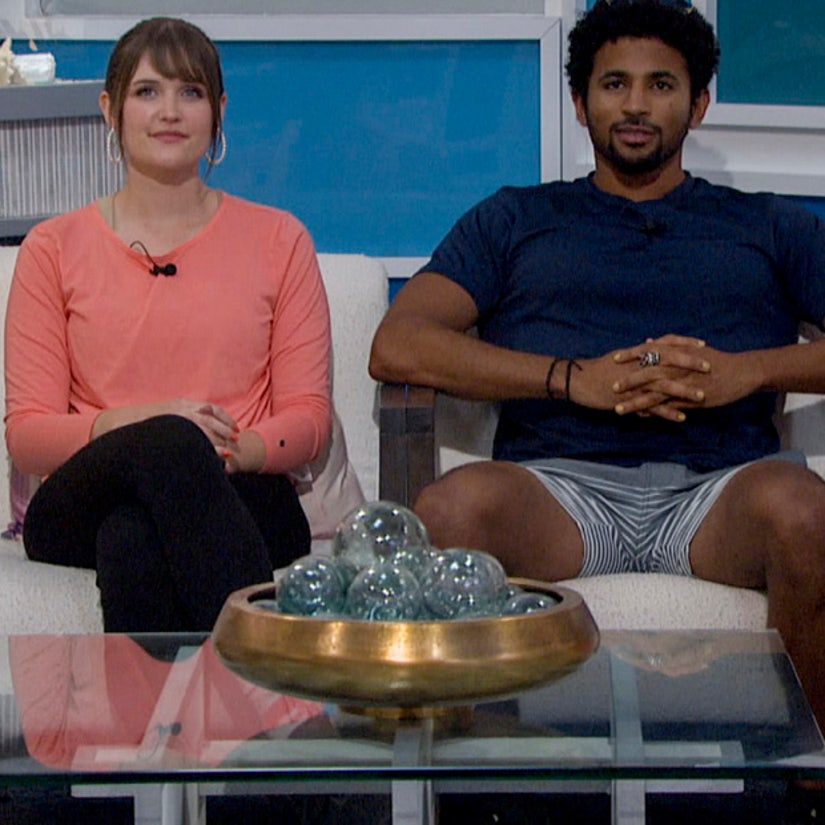 In the Jury House, Britini and Derek X start putting together the pieces of The Cookout’s side duos plan — but have they got it all figured out?

Things are about to get crazy in the “Big Brother” house over the next two weeks, as Julie revealed during Thursday’s live eviction that the next two Thursday shows will both be double evictions.

An unprecedented move, this puts pressure on The Cookout — and they don’t even know what’s coming (though they have to suspect based on pure math) — to start thinking about their own endgame.

In the end, there can be only one. And as with any large alliance, that means there is a hierarchy within that alliance. Finding out that you’re on the bottom within an alliance is they key to flipping that script, if it’s at all possible.

Interestingly, The Cookout members haven’t talked extensively about what comes after, probably because of how hard they’ve been working to keep on “mission,” as Azah put it. Keeping all six Black players in the game and keeping everyone else totally unaware of The Cookout is easily a full-time job, one they’ve performed masterfully.

We checked in on the Jury House this week, to see Britini’s stunned face as Derek X joined her there. She never expected it, and honestly, neither did he. But that’s because they were thinking of a traditional season of “Big Brother,” and not one with a stated goal of seeing all six Black players place in the Top 6.

Even the members of The Cookout have said they’d never have worked all together like this were it not for this goal. So the whole season has been impossible to read accurately for people in the House because what’s going on is unprecedented, and even goes against established personalities and relationships.

Nevertheless, it was pretty impressive how quickly Derek X was able to start putting things together as far as Tiffany’s expanded strategy of Cookout members having side duos for the distinct purpose of being put on the block as pairs and then simply voting out the non-Cookout member.

What he failed to realize was that he was in one of those duos, struggling to believe that Hannah would keep all of this from him. But as we said, in a non-Cookout season, Hannah would have probably legitimately worked with him.

One thing that helped him, though, was Kyland coming clean to him about there being an alliance in the House, when no one else in The Cookout did so. We suspect this is some of that thinking ahead/jury management thing we talked about in our last review. Kyland is looking hard at the finale, planning way ahead to get there.

Will the Jury respect his honesty in revealing even this much, if he does get there, or will he start to rub them the wrong way the way he’s starting to rub his own alliance?

Even though Kyland is getting on every Cookout member’s last nerve, we had no doubt that they would stay true to the “mission,” as it were, and vote Sarah Beth out. On top of that, she’s a legitimate threat and target in the House and has been for weeks.

With one sympathy vote from Tiffany, Sarah Beth was evicted, and she was definitely clueless about the state of the House and why she was targeted. But there it was again, with Kyland telling her about a secret alliance from the beginning of the game as the reason he had to cut her here.

In this case, we have to agree with him coming clean, as SB was his closest ally in the House and he ultimately betrayed her. This gives her time to process that betrayal in the context of a larger game move, that when it becomes clear, she’ll probably easily respect.

Had he withheld that info and allowed her to find out on her own, as she inevitably will, she would have been hurt and probably even spent time questioning whether their friendship in the House was even real.

It’ll be interesting to see if he keeps revealing the existence of this alliance as Claire and Alyssa are voted out of the House. Probably, he’s thinking it’s better to get ahead of it now so there isn’t as much bitterness later.

Adding fuel to the speculation for Sarah Beth was Azah describing what she’s doing in the house as a “mission.” There has already been speculative talk about there being no white guys who made it to Jury, and Alyssa noted that Claire is the last white person standing in the game at Top 8.

All of these clues point pretty clearly to what The Cookout is trying to accomplish this season, so we suspect the Jury will figure it out even before the first Cookout members start filtering in. At that point, they’ll probably just come clean about it, as it will already be mission accomplished.

Round and Round They Go

An endurance competition, CBS viewers only caught the beginning of this competition so they only know as far as Derek F falling from the spinning discs slamming into a circus elephant as they go round and round and round.

Yes, it’s the return of a classic competition that inevitably leads to people puking and getting incredibly sick. After an earlier random scene where Derek F flipped Hannnah onto the wooden base of the hammock, knocking her head hard, we don’t expect she’ll be able to win this.

While we’ve seen big, strong guys win these competitions before, they’ve also been won often by slighter frames, which should give the edge on this one to the ladies. As the secret HOH, Claire has to throw it, so that leaves Alyssa, Azah and Tiffany, who are definitely built for this.

Tiffany has something to prove, too. Having just come off an HOH win, she’d be the first back-to-back HOH winner ever (we think). Plus, a win from her would probably secure her girl Claire for one more week.

At the same time, Azah has absolutely nothing on her resume, so she’s definitely going to be gunning for this. The problem is that if it goes long, Tiffany and some of these guys definitely have more arm strength than Azah, and that’s what it ultimately comes down to.

Obviously, the biggest upset for The Cookout would be an Alyssa win. She should be a favorite to do well and possibly win this one, and if she does, we’ll see some interesting scrambling from The Cookout as it’s going to be hard sell to convince her Claire is the biggest threat in the House and needs to be on the Block — because it’s simply not true.

Hannah Chaddha (21) rises to the top because Tiffany is the biggest female target in The Cookout. She’s been more overt in her manipulation and control of this game all season, even though she and Chaddha are playing very similar games. But Tiffany gone would be great news for Hannah’s game. Grade: A+

Tiffany Mitchell (40) doesn’t drop a whole lot, because we believe her Final 2 with Hannah is the real deal and they can do a lot to protect one another in the weeks ahead. The guys should be very worried about these ladies, as they are savvy and brilliant at orchestrating events in the House. You know they’re working three steps ahead. Grade: A

Xavier Prather (27) appears to be the guy working most closely with Hannah and Tiffany, thinking of the future. Tiffany and Derek F do not get along, and none of them really trust Kyland anymore, though Xavier might consider taking him to the end because he believes he could beat him. But he also believes he could beat both of the ladies above him here — we’re not sure sure about that. Grade: B+

Azah Awasum (30) still needs to take control of her own destiny in this House, or she’s not going to have one. Even if she can pull off a last-minute win (Double Eviction nights are great for surprise HOH wins), it might be too little too late with a Jury unless she makes huge moves. It says a lot she’s never been on the Block to this point, but that’s because she’s basically a non-entity in the House. Grade: B-

Kyland Young (30) is working extremely hard at his endgame strategy, but if he can convince Xavier and Derek F to be guys strong to the end, they’ve got a chance of turning this game around. They may not deserve a win as much as the ladies, but they could still eliminate them. If they can do it, he’s got a shot if he can not come across too smug. Grade: C+

Derek Frazier (29) can win this game based on charisma alone, but from what we’ve seen in competitions, he’s going to need someone to take him to the end and we just don’t see it happening. They know he’s a threat because he’s not really made any enemies, and just by being part of The Cookout, he gets partial credit for their masterful control of the season. Grade: C

Claire Renfuss (25) and Alyssa Lopez (25) are equally in danger this week, depending on what happens with this HOH. If Alyssa wins, obviously all bets are off. If Tiffany wins, Claire probably won’t be the target this week. If anyone else wins, Alyssa may get targeted first now just for pointing out that Claire is the last white person standing in this game. The Cookout is looking for a clean sweep and secrecy until everyone else is gone, and she could jeapordize that. Regardless, though, unless things get crazy during Double Eviction night next week, they should both be going home back to back. Grade: D

Sarah Beth Steagall (28) had no shot. She got Derek X out for The Cookout, but she was playing a game that was a bit too aggressive and the numbers were so stacked against her already, she had no idea what a lost cause everything she was doing was. The same can be said for Claire and Alyssa and DX and Britini and even Christian. It was really too late by the time Whitney was gone to change anything. Grade: F