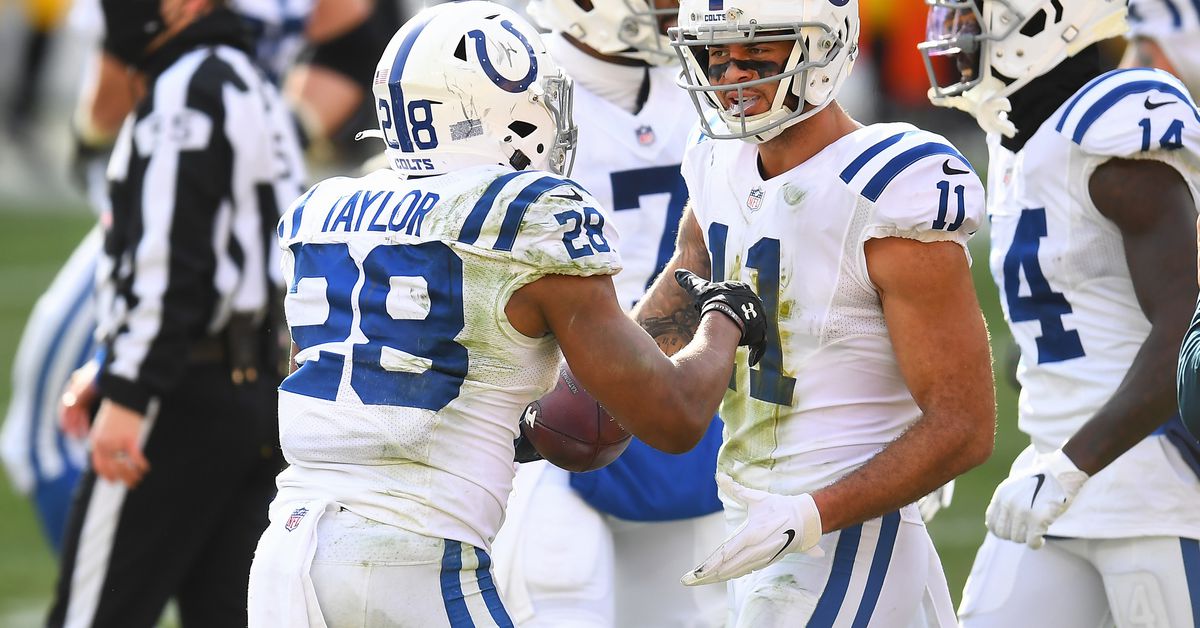 According to ESPN’s Bill Barnwell (subscription), the Indianapolis Colts are ranked as having the league’s 5th worst ‘offensive weapon arsenal’:

New Colts quarterback Carson Wentz will leave behind those Eagles in 2021, but while he’s blessed with an impressive offensive line in Indianapolis, this is another team counting on its young players to develop. The most prominent veteran at the skill-position spots here is T.Y. Hilton, who didn’t bounce back in 2020 after injuries impacted his 2019 season. 2019 second-round pick Parris Campbell has basically lost his first two seasons to injuries, with a knee issue costing him the final 14 games of 2020. The hope is that Michael Pittman Jr. breaks through as a No. 1 receiver, but even if he does, will there be much around the 2020 second-rounder? Tight end Jack Doyle has been around seemingly since the Peyton Manning era, but is Mo Alie-Cox going to have a Logan Thomas-style breakout in 2021?

Seven picks after the Colts drafted Pittman, they used the 41st selection on another key contributor in running back Jonathan Taylor. The Wisconsin product broke out over the final six games of 2020, finishing second among all backs with 741 rushing yards over that time frame. While 253 of those yards came in a Week 17 romp over a Jags team that might as well have been on the beach already, the one-two punch of Taylor and Nyheim Hines works. The story at receiver, at least for now, is more about hope than anything else.

For what it’s worth, Barnwell admittedly compiled these rankings based upon projected 2021 performance, gave more weight to a team’s wide receivers than tight ends/running backs, and not everyone that was considered was mentioned (as starting wideout Zach Pascal was noticeably omitted here for the Colts).

However, for the Colts’ offensive arsenal, it’s still strength in numbers.

The team features a breakout star at running back, Jonathan Taylor, and has talent at wideout with Hilton, Pittman Jr., Pascal, and Campbell (*if he can stay healthy)—where each wide receiver brings a unique skill-set.

Not to mention, scatback Nyheim Hines is dangerous with both his feet and his hands—as he’s a versatile, electric weapon in the backfield.

At tight end, Jack Doyle is rock solid, but unspectacular, while Alie-Cox is developing as a receiver—having previously stood out as an in-line blocker. Rookie Kylen Granson is a name to watch as a weapon who can separate and may be able to stretch the field at tight end.

The Colts will definitely need some breaks offensively.

Hilton to have a renaissance season with the stronger armed Wentz behind center and his ability to extend plays outside the pocket with his legs—which could lead to greater opportunities for ‘The Ghost’ downfield.

Pittman Jr. to continue progressing and make a ‘sophomore leap’, by starting to show more polish with his route-running and exposure play-making deep—having already excelled in his yards after the catch opportunities during his debut campaign (largely on drag/crossing routes).

Campbell to finally stay healthy—after two heavily injury plagued seasons, deploying his blazing fast speed on the field and ability to gash defenses with the football in his hands.

Pascal to remain ‘Steady Eddie’—doing all of the little things that help a team win games.

However, this is a unit that definitely has the talent, ability, potential, and opportunity to improve upon this ranking in 2021.

It’s not a star-studded unit by any means, but it’s definitely a ‘pick your poison’ by committee approach—featuring a few ascending young playmakers.