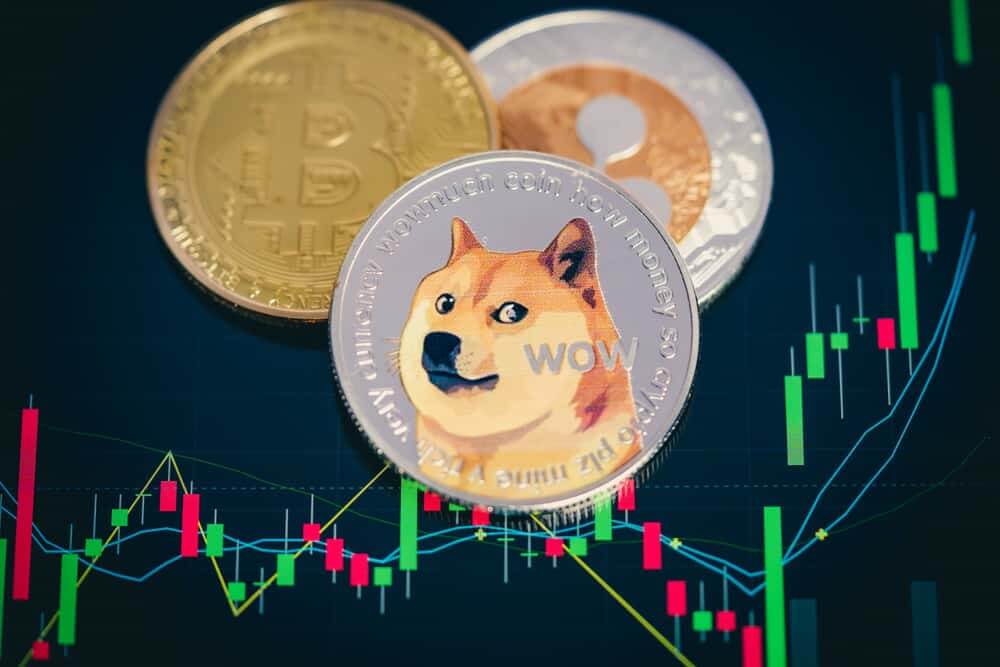 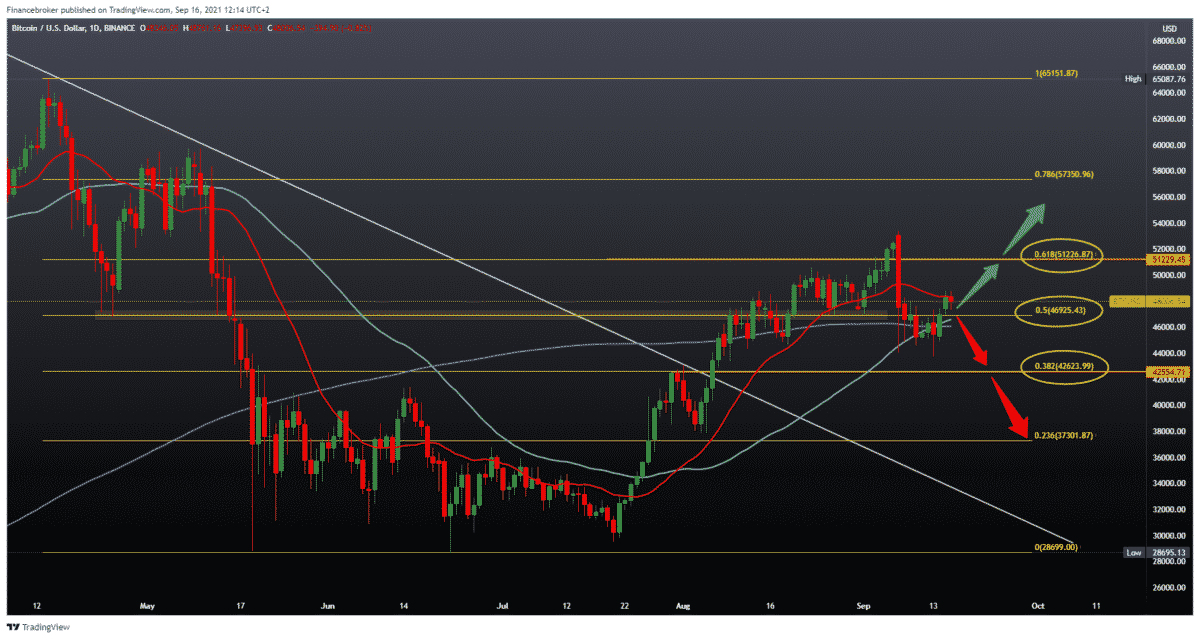 Looking at the chart on the daily time frame, we see that the price of Ethereum made good progress yesterday and climbed to $ 3600, surpassing the lower psychological level to $ 3500. Now we can say that our next bullish target is 78.6% Fibonacci level, followed by the previous high at $ 4000. In contrast, we need a price pullback below 61.8% Fibonacci levels for the bearish scenario and a 50-day moving average. after that price withdrawal, we are trading the next potential support at 50.0% Fibonacci level at $ 3040. There is a large price consolidation from August in this zone. This zone can be solid support and obstacle to the bearish trend because we can assume that in this zone, we have a lot of buyers and new Ethereum owners who expect the price to continue rising and to buy new quantities if we see a price drop in the $ 3000 -3350 zone. 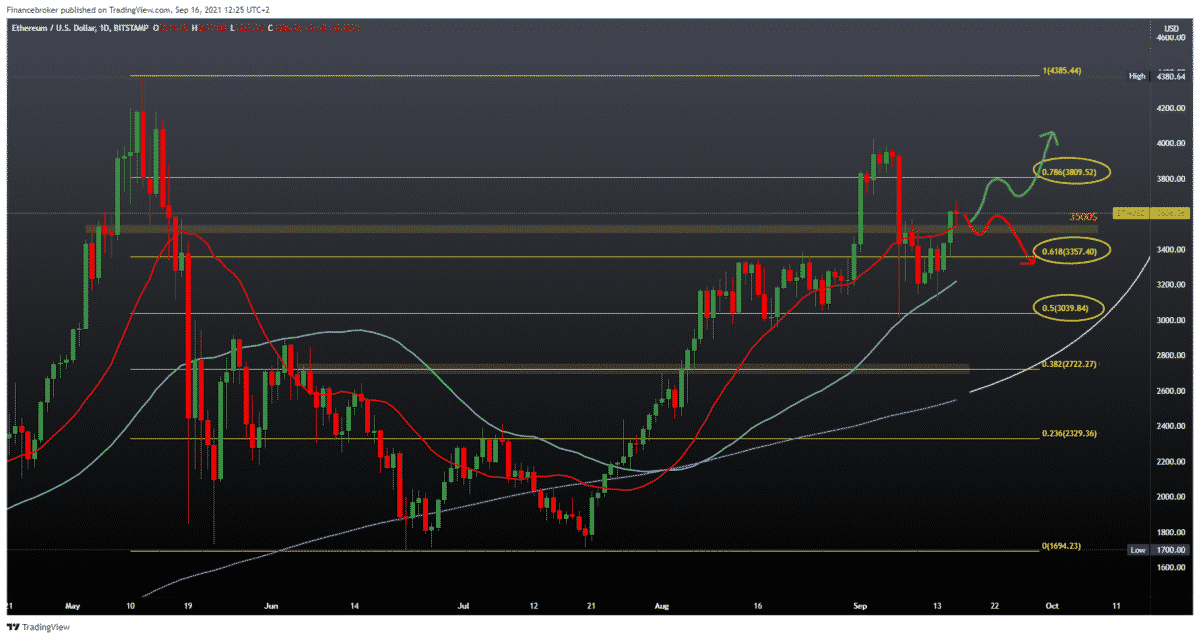 Looking at the Dogecoin chart on the daily time frame, we see that the Dogecoin price is still hovering around the 200-day moving average and that we have not yet gotten rid of the bearish pressure. While Bitcoin and Ethereum have made some positive moves with Dogecoin, we can’t say that we see something like that on the chart. Price can easily test the 23.6% Fibonacci level at 0.22850 soon, and if it breaks below, then we go up to 0.20000 to seek new support. For the bullish scenario, we need a price jump above 38.2% Fibonacci levels and a 20-day and 50-day moving average. Only then can we expect further price growth until the next psychological resistance at 50.0% Fibonacci level at 0.30000. 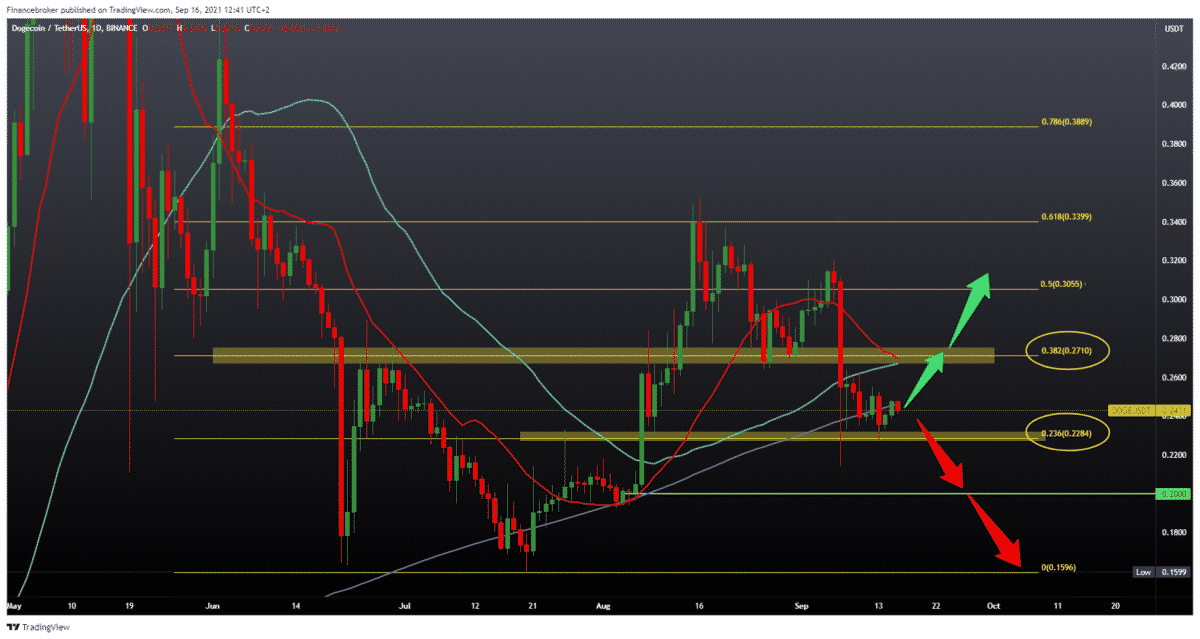 The European Union is reportedly seeking to boost technological development in the region with a planned $ 177 billion worth of war investment.

EU officials plan to fund, among other things, direct investments in areas such as blockchain, data infrastructure, 5G, and quantum computing, according to Bloomberg.

The planned investment fund of 177 billion dollars represents about 20% of the stimulus package of 750 billion euros (887 billion dollars) agreed by the EU leaders in July 2020 in order to start the economic recovery in the middle of the current COVID-19 pandemic.

Ursula von der Leyen, speaking on Wednesday, president of the European Commission, stressed the importance of investing in digital technology for all EU regions.

Part of the investment fund will go to the production of low-power processors because EU officials seek to preclude a recurrence of the semiconductor shortage that has affected several industries worldwide.

Although the EU has revealed its focus areas for a $ 177 billion technology investment fund, there is no data on the amount to be invested in each sector.

In September earlier, the Iota Foundation, along with six other companies, was selected to support the early stage of development of the European blockchain infrastructure infrastructure-technology project of a distributed book across the EU.

The EU launched the International Association of Trusted Application Blockers, whose task is to support and promote the adoption of DLT in the region, in April 2019.

Indeed, the blockchain has been identified as one of the more important emerging technologies that could shape the future of Europe. That is why EU officials are pushing for regional legal standards to prevent fragmentation of regulations.

However, recent research has shown that most Europeans prefer national regulations for crypto and blockchain to European regulatory standards for the emerging industry.