blackpink’s born pink hits all their signature notes. the only

Blackpink’s Born Pink Hits All Their Signature Notes. The Only Thing Missing Is Evolution

Born Pink, the sophomore album from Blackpink, glitters with all the beguiling elements that made the quartet the biggest girl group in the world. Lisa, Jisoo, Jennie, and Rosé’s sweet, two-faced “black” and “pink” duality, door-busting attitude, and fierce independence are all accounted for, and their immense charm remains undiminished. But the thrilling novelty has worn off. As Blackpink has become more of a brand than a band, their musical evolution has stalled. Born Pink delivers the same tried-and-true Blackpink sound that has cemented their success. That consistency will delight some and bore others. Whichever camp you fall into, the bottom line is that Born Pink fails to unlock new dimensions of musical development and depth for a group that has always been bursting with potential.
[time-brightcove not-tgx=”true”]

The business of being Blackpink

We can’t talk about Born Pink, the album, without talking about Blackpink, the brand. Since their 2016 debut, the star power and sway of Blackpink’s individual members have at times eclipsed their music, which has been doled out sparingly. The quartet has fewer than 30 songs to their name, and the tracks on Born Pink account for just eight of them. Taylor Swift, by comparison, has released more than 60 songs since 2017. Doja Cat has dropped at least 47 since 2018, and Justin Bieber more than 40 since just 2020.

In many ways, Born Pink underscores that Blackpink’s music now serves to bolster their reputation as a brand, not the other way around. Vogue declared that “no one loved Blackpink more in 2021 than the fashion industry” and on Born Pink, that love is mutual. The group was dressed by Mugler in the teasers for lead single “Pink Venom,” and Lisa name-drops Celine on the track (she has been an ambassador for the brand since 2019). On “Shut Down,” Jennie raps, “See these dresses? We don’t buy it, we request it” as a nod to their economic force as front-row fixtures and muses for fashion houses.

And there are other kinds of endorsements tied to Born Pink, too, which affirm the album as a commercial project as much as a musical one. The track “Ready for Love,” for example, was released as a collaboration with gaming heavyweight PUBG before appearing on Born Pink, and a Los Angeles pop-up store celebrating the album is co-branded with Spotify.

Read more: The Best K-Pop Songs and Albums of 2022 So Far 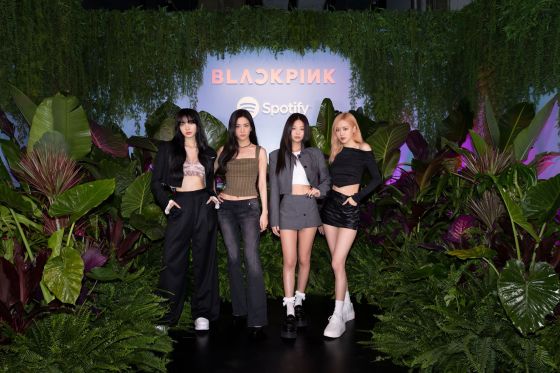 An unwavering commitment to “Blackpink-core”

Every track on the album would be as at home on any previous Blackpink release as this one. “Pink Venom” sweetly threatens to inject “pink venom… straight to ya dome” and ends with the group’s signature vocal percussion, this time a repeated “ra-ta-ta-ta.” “Shut Down” is a boastful kiss off to naysayers while “Tally” is an apathetic sex-positive declaration of self-worth (and contains several “f-cks,” perhaps the most thrilling surprise of the album). “Typa Girl” is an “I’m not like other girls” anthem accented by punchy snaps and piano.

The ‘80s synth-tinged “Yeah Yeah Yeah” is a welcome switch-up, since musical elements of that era are rare within Blackpink’s discography. Rosé’s “Hard to Love,” a strange addition as the only solo track on the album, is still a solid pop-rock bop. “The Happiest Girl” is a palatable ballad, with the girls nursing a wounded ego and an ailing love. It includes a rare sung verse by rapper Lisa, whose voice is beautiful. “Ready for Love,” the PUBG collaboration, rounds out the album as a straightforward dance track without adornment.

Born Pink cements a visual aesthetic, too. In our walk-up to the album, we called pre-release single “Pink Venom” an “on-the-nose extension of the group’s visual universe” for its use of the color palettes, earth, fire, and water elements, combat imagery, and large group dance finale we’ve seen from the group in the past.

The music video for second single “Shut Down” is even more straightforward, intentionally referencing past visuals from older music videos: a chair-sized globe from “Whistle,” a trash bag-laden pickup truck from “BOOMBAYAH,” “DDU-DU DDU-DU’s” mirrored tank and pink shopping bags for Jennie, umbrella for Jisoo, Blackpink-branded katana for Lisa, and chandelier swing for Rosé. The scenes have been drained of color and recast in black and pink, to underscore them as key iconography of Blackpink’s visual universe.

Here, there’s a straight line to be drawn to the other biggest band in the world, BTS, whose recent anthology album Proof plucked tracks from across the more than dozen albums they’ve released since 2013. Proof’s lead single, “The Best is Yet to Come,” also saw them relaxing amongst iconic imagery from their past music videos. Those scenes represented a decade of growth that took them from scrappy, macho-posturing nobodies to sleek, soft Top-40 mainstays.

Blackpink has not been given the agency to evolve in nearly the same way, though they are more than capable of it. Born Pink may be YG’s way of sketching the blueprint of the group’s musical legacy, but the members should be empowered to build on top of it soon.

The pros and cons of the Blackpink blueprint

But what if evolution isn’t the point? On the back of less than three dozen songs, Blackpink has risen to become style icons and superstars, the most popular girl group in the world. Why, some might argue, would they change what they’re doing?

Still, I found myself listening to the album thinking, “After so much time, how do they still sound the same?” Lisa, Jisoo, Jennie, and Rosé have traveled the world and have surely experienced their share of pain, loss, joy, and melancholy. It’s hard to believe that things wouldn’t have shifted inside them, that new love wouldn’t have bloomed in their hearts, that challenging thoughts wouldn’t have troubled their minds. They don’t owe us anything, but they do have their own stories to tell. Blackpink may have been born pink, but the world is still waiting to hear all the new colors they’ve grown into.

Share
Previous How will Jacob Rees-Mogg tackle the energy and climate crises? | podcast
Next Robotic Dog Uses AI to Learn to Walk in Under 20 Minutes