Brexit vindicated as firms overwhelmingly back London as WORLD’S 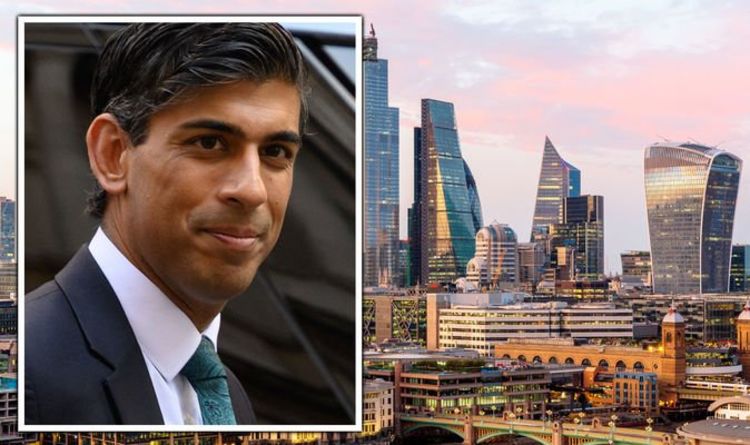 In the bank’s survey, 69 percent of City firms agreed London will remain one of the world’s leading financial services hubs.

Around 52 percent of all respondents also thought the competitiveness of the UK financial sector will remain broadly unchanged in the next year.

In addition, 32 percent of firms believe the UK financial sector will improve, compared to 17 percent who think it will worsen.

However, 29 percent of firms believe the UK and EU will never agree equivalence for financial services, with 42 percent suggesting a deal would be struck from 2023 onwards.

The report said: “While the full impact of Brexit on the sector is still evolving, it’s fair to say that early fears of a massive wave of jobs and businesses relocating to Europe has not materialised…

“It seems sensible to conclude that, while London’s status has taken a knock due to Brexit, it will remain one of the world’s leading financial centres.”

Adrian Walkling, head of financial services at Lloyds Bank commercial banking, also told The Times the findings emphasised “the belief in London as a global centre for trade and finance as firms anticipate and adapt to the new regulatory environment”.

It comes after Chancellor Rishi Sunak vowed to “sharpen”the competitive advantage of the UK financial services sector in July.

In his first Mansion House speech, Mr Sunak said Britain’s departure from the EU was a unique opportunity to tailor rules while maintaining high regulatory standards and open markets.

The Chancellor then set out plans to change a slew of rules inherited from the EU, including scrapping curbs on “dark” or off exchange trading favoured by big investors wanting anonymity but distrusted by EU regulators.

Mr Sunak also said there will be new sustainability disclosure requirements for companies to report on the impact they have on the environment.

Lobby group TheCityUK also warned last week London had declined over the past decade compared with its main competitors, like New York and Hong Kong, in its global share of markets.

The group believes tax and labour reforms, alongside other policies, are needed to strengthen international trade links and to expand into new markets.

There also remain concerns about a lack of a financial services equivalence deal with the EU.

Miles Celic, CEO of TheCityUK, told Reuters in July there is a need to ensure a compelling proposition for Britain to remain a world-leading financial centre.

He said: “This includes simplifying our regulatory regime while maintaining its quality and strength, providing certainty and clarity with a business tax roadmap, and enhancing efforts to attract and retain the talent we need.”

City figures have also warned London’s status as Europe’s financial capital will be in serious jeopardy if the Treasury and Bank of England are slow to introduce digital Sterling.

He said: “The City’s multicurrency, multiproduct, deep and diverse markets and their associated clearing and settlement activities and institutions have so far largely protected against any demarche to EU financial centres.

“An early wholesale led Euro CBDC, i.e. in advance of any sterling model, would gift an immediate opportunity rapidly to move the bulk of Euro-based transactions away from London to the continent, probably mainly to the advantage of Paris, based on the cost, speed and capital saving associated with its use.”