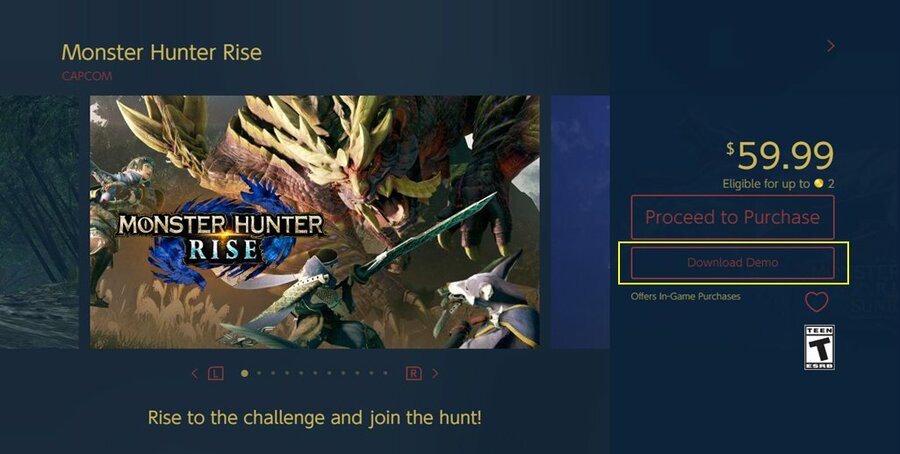 It featured a returning location “Jungle” (an area that debuted in the second generation of Monster Hunter), new monsters from the Monster Hunter Frontiers series and Monster Hunter 4 (Espinas, Gore Magala), and many more to come.

Capcom will also be releasing a demo for Sunbreak on June 14th / June 15th, depending on your timezone – allowing you to sample some of the battles and even the game’s multiplayer.

Solo and multiplayer will also be supported, and there’ll be no limits to the number of times you can attempt quests.

During the same announcement, Capcom also mentioned how it would release a number of free title updates for the Sunbreak DLC expansion. The first will be arriving in August (Lucent Nargacuga – a new monster). The new area Forlorn Arena will be added, too.

This will follow with Fall and Winter updates in 2022 and beyond – including additional monsters and elements. Digital pre-orders will also receive some special bonuses – including Palico and Palamute armour sets.

Will you be trying out the Monster Hunter Rise: Sunbreak demo? Leave a comment down below.

Share
Previous Yellowstone Park, Staggered by Rain and Floods, Will Stay Closed for Days
Next Amber Heard says she and Johnny Depp perceived as ‘Hollywood brats’ at trial – live

The Worst Reason To Brush Off Content Moderation Concerns In Antitrust Bills: Eh, The Supreme Court May Destroy 230 Anyway, So It Shouldn’t Much Matter…

Sharing our Engineering Career Framework with the world

If you have been using an Android smartphone for a while, you might have come …