Case of Cervical Carcinoma Complicated by Genital Prolapse: A report 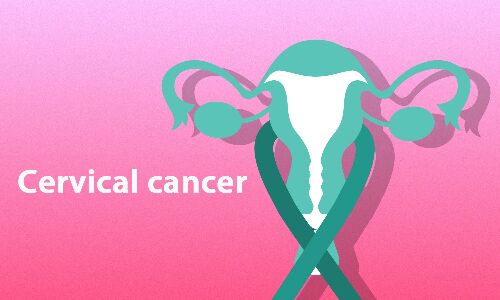 Cervical squamous cell carcinoma and pelvic organ prolapse
(POP) are individually considered common events in women of advanced age.
However, the concurrence of complete uterine procidentia and cervical cancer is
scarcely encountered, mainly in elderly women from low-income countries. In
most of these cases, however, the pathophysiologic association of these
entities was discussed, mainly focusing on modes of treatment. Aikaterini-Eirini Evangelopoulou and team presented
a unique case of a woman with a history of uterine prolapse who developed a
huge malignant cervical tumor which led to an irreducible genital prolapse.

An 81-year-old Caucasian woman gravida 2, para 2 presented
to outpatient department with new-onset vaginal bleeding and gradually
worsening uterine prolapse for the past three months. She had a documented
history of uterine prolapse for the past 15 years. The patient also described
difficulty in passing urine for the last 5 years and worsening local pain. Her
renal function was affected, and a urine catheter was inserted. She also
reported well-controlled arterial hypertension and asthma.

The physical examination revealed uterine procidentia with
an ulcerated lesion located on the posterior wall of the ectocervix. Τhe
prolapsed uterus was irreducible, and attempts to manually reduce the prolapse
were unsuccessful. Informed consent was obtained, and patient was transferred
to theater for manual reduction of the prolapsed uterus under general
anesthesia. The cervix was biopsied prior to the procedure.

Initial attempts failed to restore the uterus to its
original position. Applying controlled pressure to the bulky part of the
prolapsed uterus along with careful pushing of the cervix facilitate the
replacement of the uterus into the vagina. A large vaginal swab was used to
refrain the uterus from displacement. The histopathology report revealed a
squamous cell carcinoma of the cervix.

Pretreatment clinical staging tests including chest X-ray,
ultrasound, and contrast-enhanced computed tomography scan of the abdomen were
performed. Significant findings were a 16 cm enlarged uterus and mild to
moderate unilateral hydroureteronephrosis, secondary to periureteric
infiltration, clinical stage IIIB. Her chest X-ray did not show any abnormal
features. Cystoscopy and proctoscopy were also performed for staging with no
evidence of bladder or rectal invasion.

The patient was disqualified from surgery due to the
severity of the disease (FIGO Stage IIIB). Palliative chemotherapy with
cisplatin plus radiotherapy was recommended, but the patient’s general
condition was rapidly deteriorated, manifested by cachexia, anorexia, and
pelvic pain; thus, treatment was postponed. Three months after the diagnosis, a
telephone follow-up took place. Authors were informed that end-life care
measures, regarding her comfort, were performed by an in-home nurse.

POP can cause symptoms such as sensation of pelvic pressure,
bladder and bowel dysfunction, bulging through the introitus, and dyspareunia.
A common complication of procidentia is the ulceration of the most dependent
area of the prolapse. A biopsy is warranted in any ulcerated lesion in order to
exclude malignancy. Although our patient reported new-onset vaginal bleeding,
the size of the malignant lesion indicated that the 81-yearold woman had
probably overlook her symptoms (including bleeding) for a long period of time.

Although cervical cancer and prolapse are common diseases,
the coincidence of both of them is rare and occurs in women between 60 and 80
years old where the procidentia exists for 10 years or more. On the other hand,
cervical carcinoma peaks in the 5th decade of women’s life. The different age
distributions can explain, in part, the rarity of concurrence in which both
entities coexist. This patient reported the presence of uterine prolapse for
over 15 years with new-onset vaginal bleeding. Whether screening for cervical
cancer should be prolonged in patients with uterine procidentia is a question
yet to be answered.

Management of patients with POP complicated with cervical
cancer should be multidisciplinary due to concomitant diseases and involve
medical subspecialists such as gynecologic oncologist, urogynecologist, and
radiation oncologist. In this case, authors had to manage the impaired renal
function and also facilitate the staging of the disease by restoring the
affected organ to its original position. Reduction of the prolapse facilitated
the radiotherapy treatment and minimized the risk of visceral injury due to
radiation.

The curative principle of cervical cancer including radical
surgery with vaginal hysterectomy and adjuvant radiotherapy or radiotherapy for
early stages and chemoradiotherapy for locally advanced cancer is acceptable in
cases where cancer coexists with prolapse. Most authors indicate radical
vaginal hysterectomy with bilateral iliopelvic lymphadenectomy complemented
with external pelvic irradiation and chemotherapy. It is understood that the
treatment strategy should be based on the clinical stage of the disease, the
presence of metastatic disease, and patient’s performance status.

The concurrence of advanced cervical carcinoma and POP is
rare and usually affects elderly women. Staging and treatment plan of cervical
cancer is hampered by the anatomic dislocation of the affected organ. The
primary concern in this patient was the restoration of kidney function and the
palliative care at a later stage. The best therapeutic approach in such cases
is yet to be determined. Needless to say, that a multidisciplinary management
is mandatory. Reducing the prolapse in order to allow radiation therapy is a
viable option in a patient with stage IIIB cervical cancer who is disqualified
from surgery due to the severity of the disease.