Catlateral Damage: Remeowstered Pounces onto Xbox One and Xbox Series

I’m Chris Chung, the cat wrangler and one-man developer at Manekoware. I’m excited to finally bring Catlateral Damage: Remeowstered to Xbox One and Xbox Series X|S, available to play right meow! Cat puns aside, Remeowstered is the definitive edition of everybody’s favorite first-person destructive cat simulator, where you play as a house cat, run around houses, and knock as much stuff onto the floor as possible. If you own a cat, you know exactly what I’m talking about. This game expands your feline fantasy, too, by allowing you to meow at nothing, hunt mice, and cause chaos in unique locations like a supermarket and museum.

I built the prototype of the original Catlateral Damage in one week way back in 2013, inspired by my childhood cat, Nippy. He was always up to no good, whether it was climbing up on the kitchen counters to investigate some human food or knocking down a full tub of catnip when we weren’t home. After the prototype gained some attention online, we ran a successful Kickstarter campaign, launched version 1.0 of the game in 2015, added some new levels, and even added VR support as a free update in 2016. Then, in 2018, I considered rebuilding the game to address some of the shortcomings of the original game and bring it to new platforms like Xbox. Hence, Catlateral Damage: Remeowstered was born.

Lighthearted destruction by a cuddly kitty is at the heart of both games. The original game featured fully procedurally generated levels, unlockable cats, and hundreds of real-life cat photos to find and collect. Remeowstered retains all of that, but also includes a full progression redesign for unlocking new levels and other content. There are also some new features, new content, and lots of small improvements in every corner of the game.

Catlateral Damage is a very personal game to me, not only in its inspiration but also because we’ve been able to memorialize players’ pets through their photos within the game. If you’re a cat lover, I hope you check out the game and enjoy it as much as many others have over the past few years! 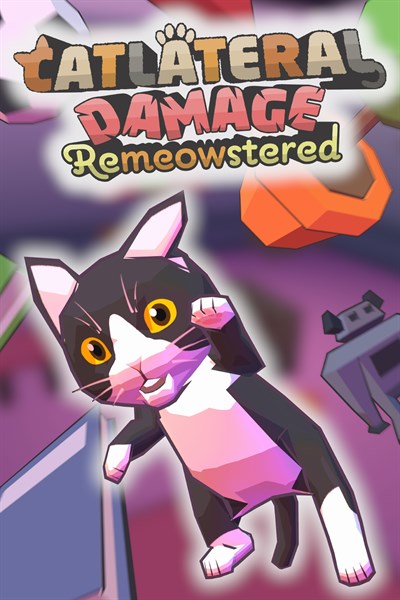 $11.99
Get it now
Xbox One X Enhanced
Catlateral Damage: Remeowstered is the definitive edition of your favorite destructive cat simulator, where you play as a house cat on a rampage and do all that fun stuff your owner hates!

See the world through the eyes of a cat! Run around the house, topple neatly organized books, shatter vases, meow at nothing, tear up curtains, nap in obscure places, and more!

Remeowstered was rebuilt from the ground up to give a shiny new coat to the destructive feline gameplay of the original!