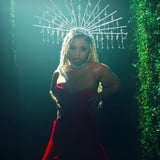 Chloe Bailey’s solo music era is finally here! On Thursday night, the 23-year-old singer, who goes by Chlöe as a solo artist, dropped the full music video for “Have Mercy.” The video features Chlöe as a modern-day Medusa as she seduces men into a sorority house before turning them into stone. Not only are there incredible visuals, fashion moments, and choreography, but there are also a handful of cameos. Bree Runway and Rome Flynn make quick appearances as well as Tina Knowles. The song, which Chlöe first teased on her 23rd birthday in July, marks her debut single as a solo artist after previously releasing music with sister Halle as part of Chloe x Halle.

The sisters first rose to musical fame after getting the attention of Beyoncé for their cover of “Pretty Hurts.” They eventually signed with the singer’s management company, Parkwood Entertainment, in 2015. They released their debut album, The Kids Are Alright, in 2018, and their second studio album, Ungodly Hour, in 2020. Most recently, the sisters have been embarking on their own solo careers, with Halle starring in Disney’s live-action version of The Little Mermaid and Chlöe working on a solo album. Be sure to check out the full music video for “Have Mercy” above, then tune into the MTV VMAs on Sunday when Chlöe performs the song for the first time.

Search more articles here: Chloe Bailey Is a Modern-Day Medusa in Her Anticipated Music Video For

Read original article here: Chloe Bailey Is a Modern-Day Medusa in Her Anticipated Music Video For