With the Corsair HS55 Wireless Core, Corsair seems to be throwing its hat in the versatile and travel-friendly gaming headset ring. But, whereas the likes of the SteelSeries Arctis Nova Pro Wireless and Arctis Nova 7 are filled to the brim with all the stuff you could want from a PC gaming headset that you can use anywhere and with anything, the brand scales it back to something simpler and much more affordable.

It may not be the stuff of gaming headset legend, but the Corsair HS55 Wireless Core still has all the makings of an on-the-go gaming headset. It’s got a lightweight design that easily flattens for storage. It has a decent 24-hour battery life and fast charging. And, it has an on-the-fly EQ preset control that lets you cycle through four of the most vital sound presets in the gaming headset scene.

So, while we have been spoiled by the Arctis Nova Pro’s brimming cup of features and extras, we also appreciate what Corsair is trying to do here, which is to offer gamers a great wireless gaming headset alternative that costs less yet still comes with all the basics. We only wish its sound quality was as good as that of the wired Corsair HS65 Surround.

The Corsair HS55 Wireless Core will set you back $99 (£99, AU$169). While that sounds like a lot to spend on a gaming headset, even a wireless one, it’s also fair to mention that it’s more affordable than the competition.

The SteelSeries Arctis Nova 7, which we’re in the process of reviewing, will cost you twice as much for very similar features and a pair of smaller drivers. Meanwhile, the Razer Barracuda will set you back $60/£60 more, and again, for largely the same specs and features.

Still, is its price tag fair for its feature set and level of performance? It could be a little cheaper, perhaps. But, also considering that wireless gaming headsets still aren’t cheap, we can say that this price tag also isn’t surprising. 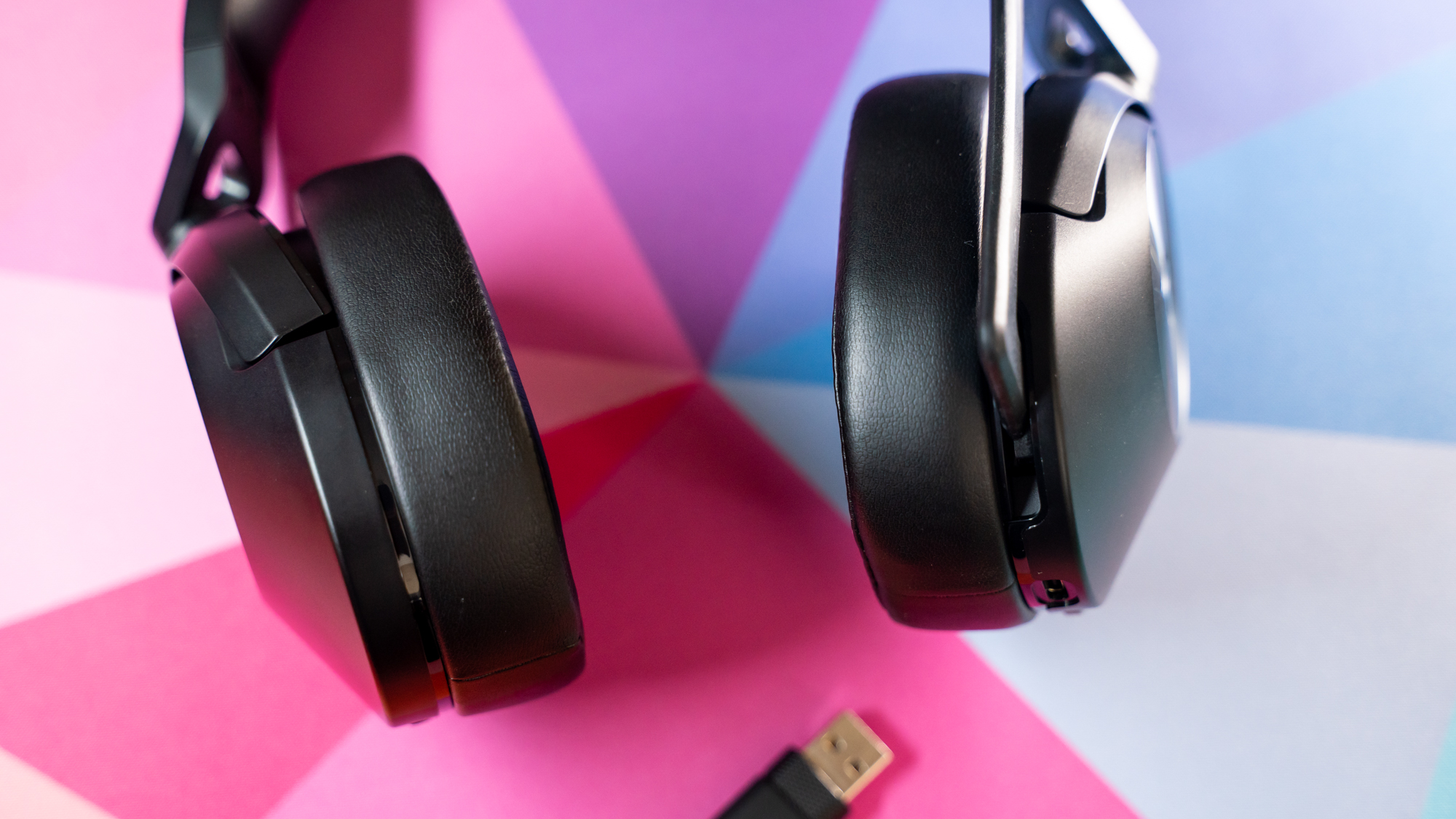 Although it isn’t the most robust and premium-made gaming headset we’ve tested, the Corsair HS55 Wireless Core is still designed to be travel-friendly. It’s lightweight at 266g (that’s less than 0.60 lbs), comes with ear foams that are soft and plush, has clamping power that allows it to stay in place even when you’re moving through a crowd, and boasts ear cups with plenty of swivel so you can lay the whole thing flat for storage in your weekender or laptop bag. 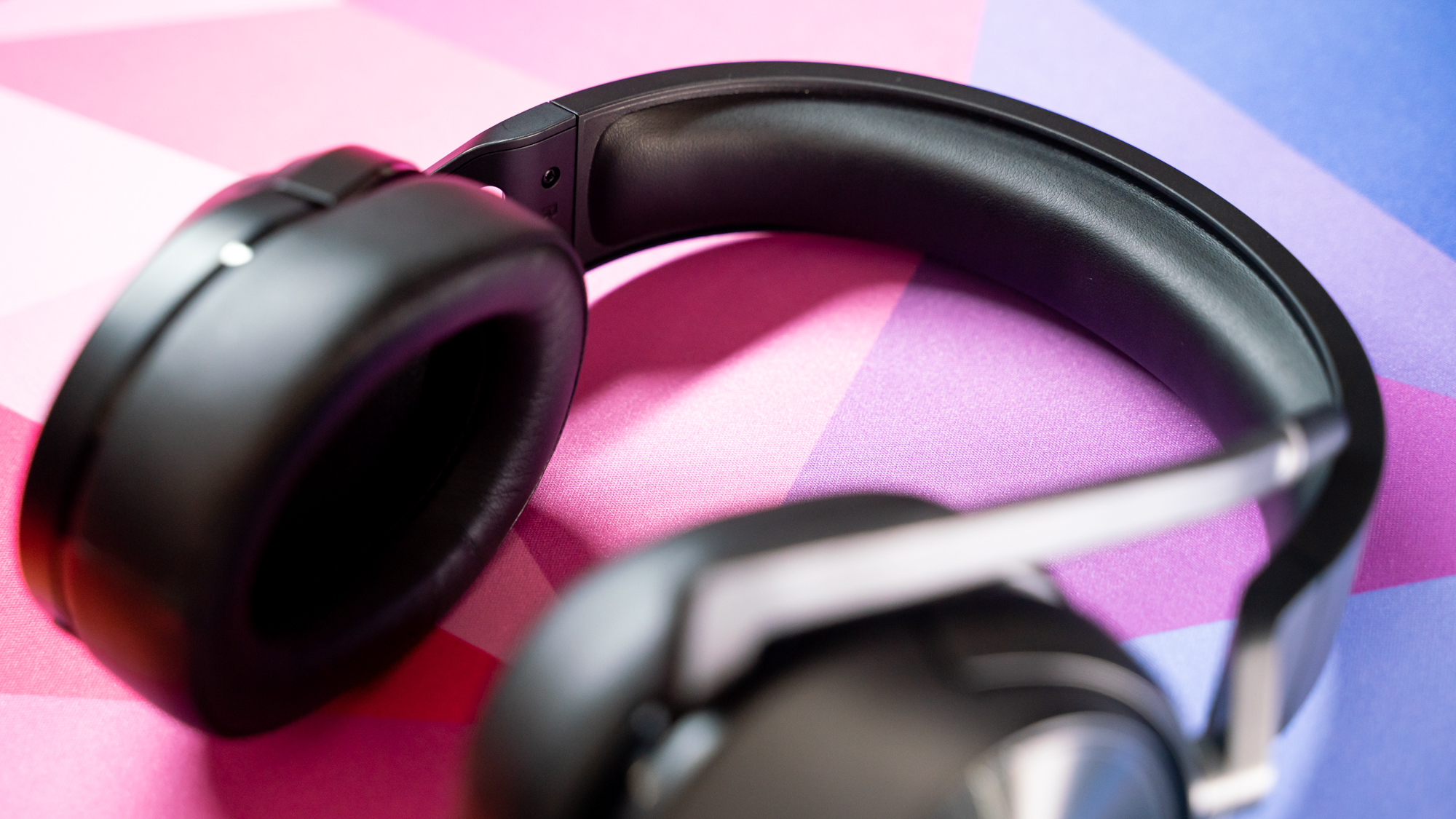 Naturally, all those elements also help make this gaming headset a comfortable one. The plush leatherette ear foams feel luxurious against our ears and do not get too hot even after an hour or so of wear. Although there is a tad more clamping force than necessary, which means you might have to break it in a little before use.

The construction is pretty solid overall despite the fact that it’s mostly made of smooth matte plastic, which is nice to the touch. We don’t presume to know just how sturdy it is, though we can safely speculate that it will easily crack if it falls from a higher floor or under the weight of a gaming PC. However, we do think it’s solid enough to survive normal wear and tear. 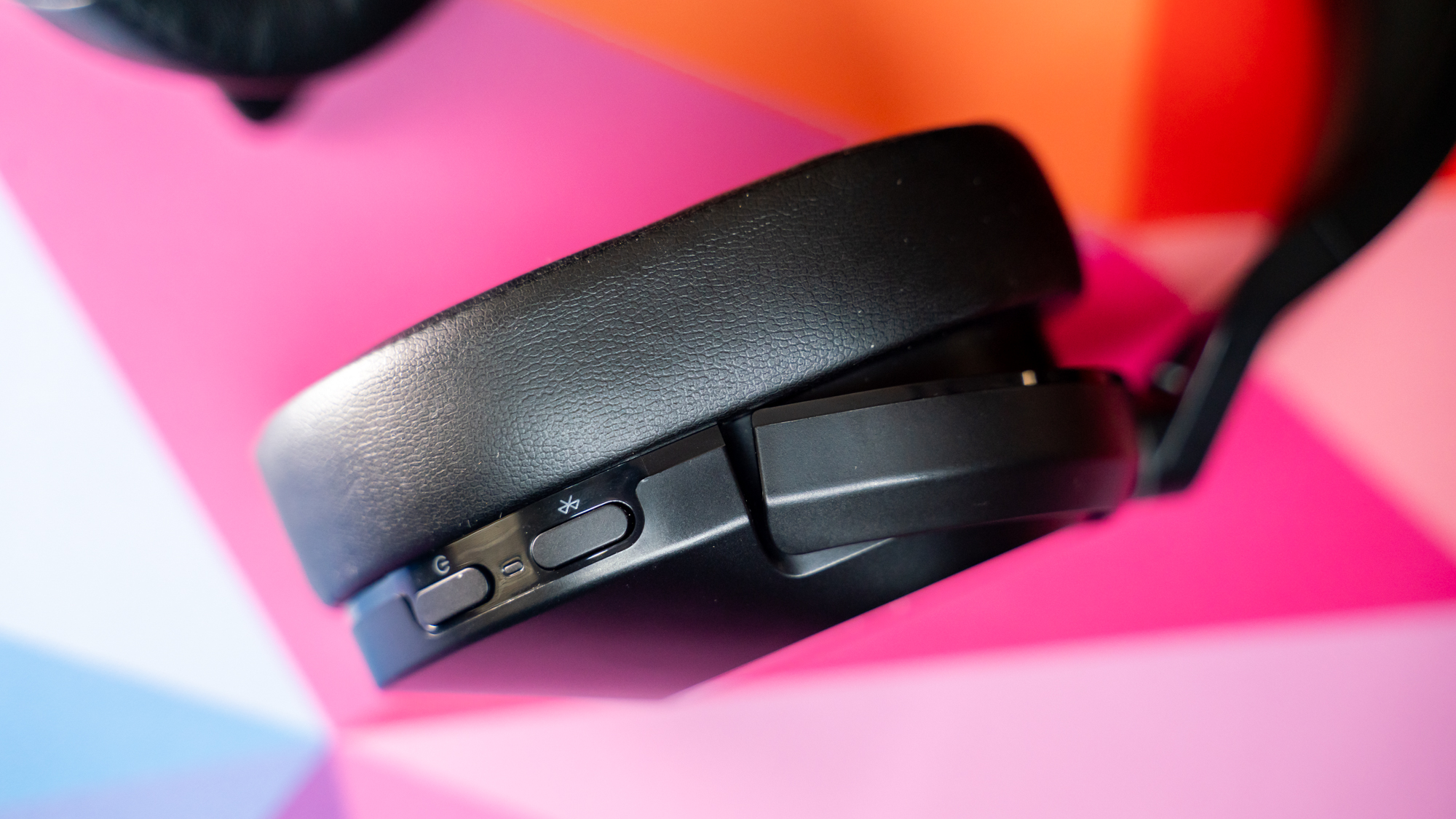 There are three buttons here, with the Bluetooth and power buttons on the right earcup and the mic mute button on the left earcup next to the volume dial, which you can also press to cycle through the aforementioned sound presets. The choice of adding a mic mute button seems bizarre as the mic boom itself is a flip-to-mute one, and it feels a lot more convenient to flip it up and down. 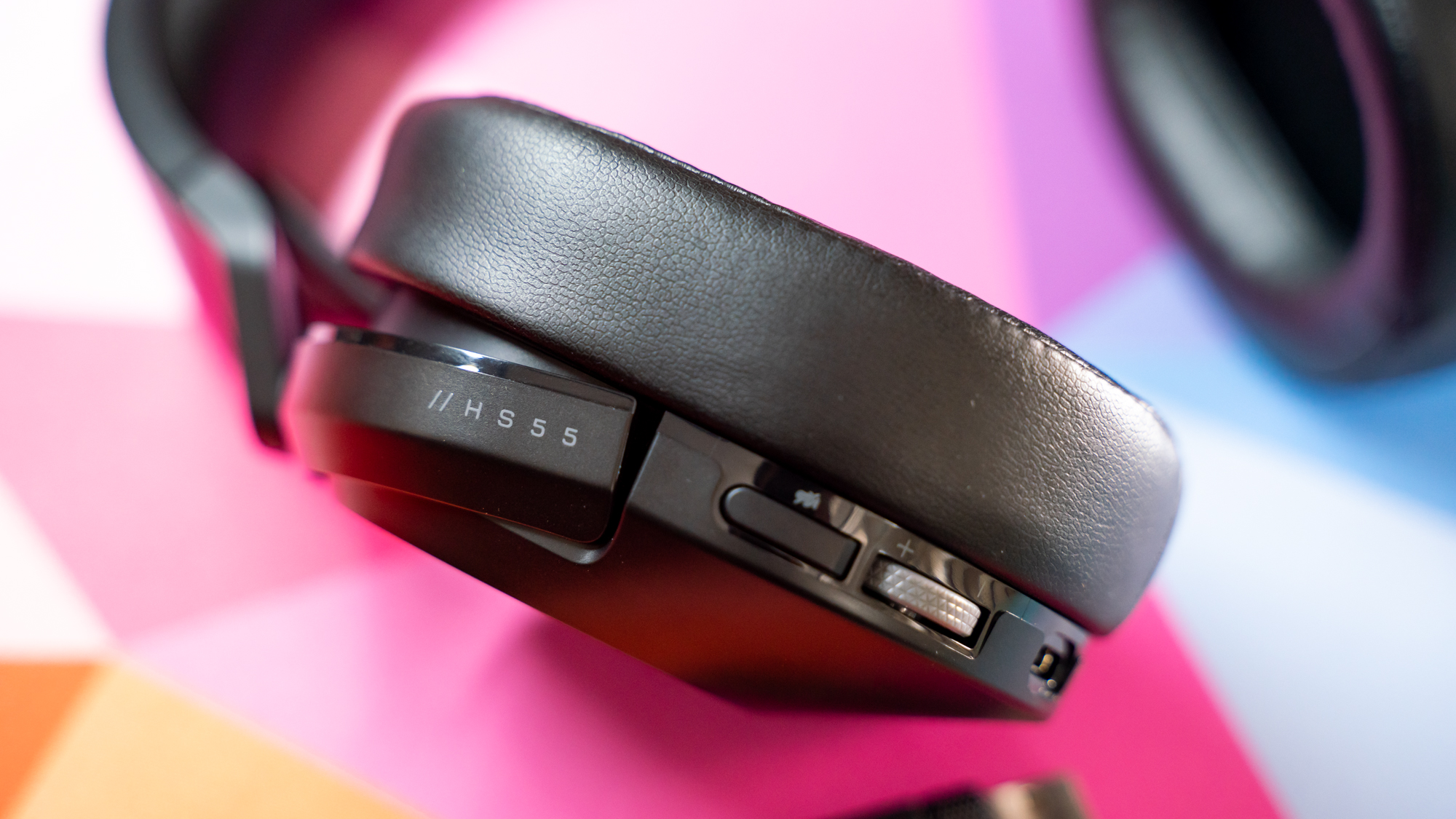 The buttons have some resistance to them when pressed, but that’s really neither good nor bad, just a matter of preference. We just wish we didn’t have to press and hold the power button to turn it on and off – although even that is standard with most gaming headsets.

Disappointingly, Corsair still went with a USB-A 2.4GHz wireless transmitter, instead of a  USB-C. At least, Bluetooth connectivity so you can use it with your smartphone or Nintendo Switch. 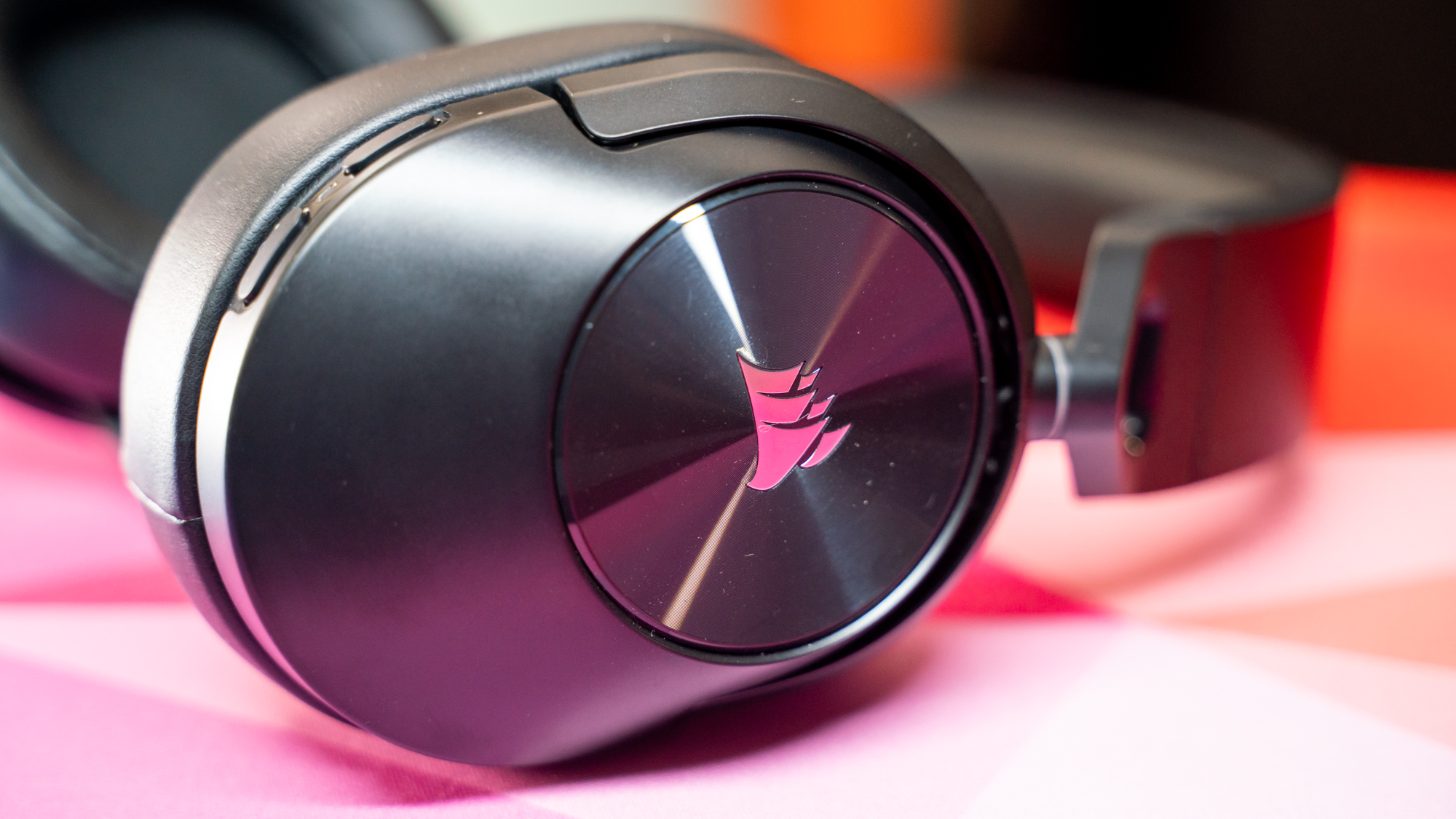 One of the things the Corsair HS55 Wireless Core does go above and beyond with is its 2.4GHz wireless connectivity. It offers a 50-foot (or 15-meter) range, which is impressive for a mid-range gaming headset considering that others start to break up as soon as you step into the next room.

We also appreciate the attempt to deliver digital surround sound. Though this headset sounds more intimate rather than expansive like a proper surround sound, it’s great in terms of spatial audio. You can hear the different individual elements around you, whether it’s the wind going from right to left or a battle going on around you. Still, don’t expect a wide soundstage, as it doesn’t feel very spacious, limiting its immersiveness.

The sound quality is good overall, though not quite as rich and as full as we hoped. At default, there’s plenty of bass here, though perhaps not enough low bass extension to deliver that rumble you want from games and movies. There’s decent high end as well, but it’s a little rolled off so it doesn’t sound as crisp and detailed. The mid-range sounds a little recessed, particularly affecting the dialogue, which isn’t as crisp and clear. While you can still hear what the characters are saying, it sounds a little hollow.

Funny enough, the cheaper 3.5mm Corsair HS65 Surround delivers more rumble, a clearer sound, and a lot more punch. Usually, it’s the other way around, and the one with the digital connection sounds better, even if it is 2.4GHz wireless. So, this doesn’t make a lot of sense. We can only assume that Corsair probably used cheaper drivers so they can fit all the other features in the Corsair HS55 Wireless without it costing a lot more – it’s only $20 more than the HS65 – or they tuned it a little differently.

Unlike the H65, the HS55 Wireless also doesn’t have app support. We tried to use it with the Corsair iCue software, and all it allowed us to do was link it with the 2.4GHz wireless transmitter, which was moot as they’re already linked. This means that you won’t be getting proper EQ privileges here.

You can, however, cycle through four different sound profiles on-the-fly by pressing the volume button. You have standard, bass boost, movie theater, and FPS competition available to you. These profiles aren’t very audibly different from one another, but the bass boost does give you that nice rumble that’s missing at default while the FPS competition very slightly makes the individual elements sound crisper. 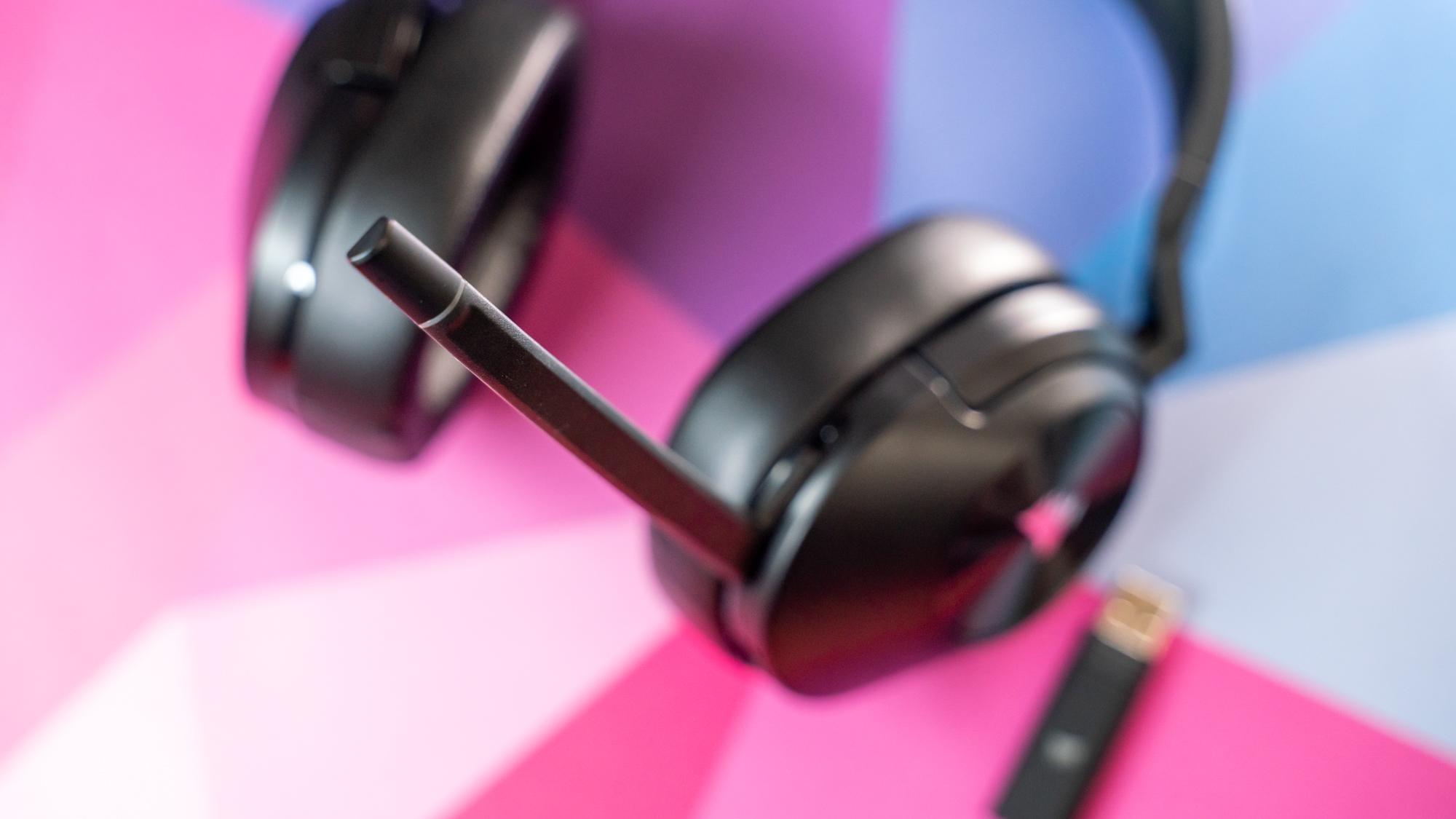 When it comes to the mic, there’s no background noise rejection, sadly. The person on the other end will hear you click-clacking away at your keyboard. However, your voice will come through loud and clear and dominant, albeit slightly compressed, so as long as the background noise isn’t very loud, it shouldn’t be distracting.

There’s up to 24 hours of battery life here, which is good, if not amazing. Luckily, it does have fast charging, and 15 minutes should get you up to six hours of gameplay.

Should I buy the Corsair HS55 Wireless Core? We pride ourselves on our independence and our rigorous review-testing process, offering up long-term attention to the products we review and making sure our reviews are updated and maintained – regardless of when a device was released, if you can still buy it, it's on our radar.

Read more about how we test

Share
Previous Peter Shor wins Breakthrough Prize in Fundamental Physics
Next How to connect Last.fm to Apple Music on your desktop, iPhone, or iPad to track all your music habits

CYBER: Uber’s Been Hacked and Sim Swappers Are Getting Violent

DevOps Vs. SRE: The Productivity Conundrum

Exposing the evolutionary weak spots of the human genome