A look ahead to fierce competition.

The Group Stage of ESL Pro League Season 14 has concluded, leaving 12 teams who will fight to win the trophy in the playoffs. The departure of teams like Astralis, FaZe Clan, G2 Esports and Virtus.pro has changed the landscape of the playoffs. However, in-form teams like Fnatic and forZe are the interesting ones to watch out for. That said, big guns like Heroic, Natus Vincere and Gambit Esports are still the favorites in the league. Let’s look at the Elimination Bracket. 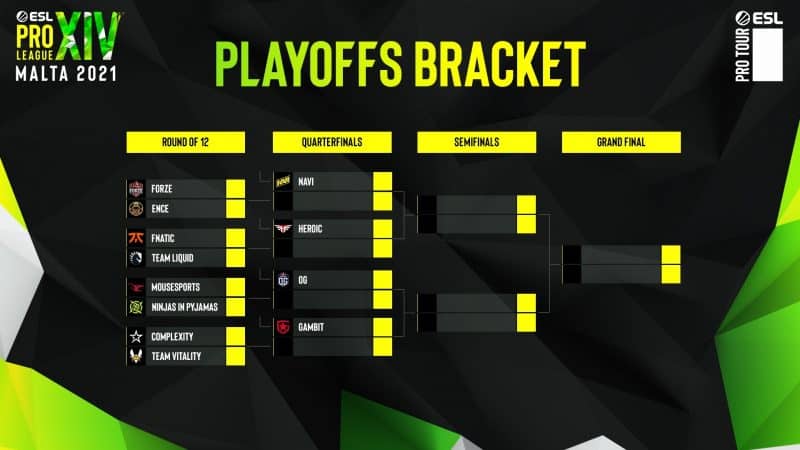 The top teams of the Group Stage will directly play in the quarterfinals with the winners of Round of 12. These teams are:

Heroic has put up impressive performances in Groups. While unbeaten, the Danish team beat the likes of Team Vitality, ENCE and Astralis. Both Martin “stavn” Lund and Ismail “refrezh” Ali are playing some exceptional Counter-Strike for Heroic and the team now awaits its next opponent in the Quarterfinals.

OG is dominating the ESL competition with an unbeaten record against strong teams. To top the groups, OG had to win against Virtus.pro, G2 Esports and Complexity Gaming. OG also won 2-1 against forZe, who are playing exceedingly well in the league. OG’s AWPer, Mateusz “mantuu” Wilczewski, is in top form and they look a formidable force going into the Quarterfinals.

Na’Vi is in good shape, as expected from a top CS:GO team. They were in a tough group with the likes of mousesports, Fnatic and FaZe Clan, yet they managed four victories out of five matches. Losing only to BIG, Na’Vi is sitting on top of the table. Oleksandr “s1mple” Kostyliev is one of the best performing players in the league right behind Mathieu “ZywOo” Herbaut.

Gambit is in a similar situation to Na’Vi where they have lost only one of their five encounters. The Russian team has won against strong teams like Team Liquid and FURIA. Abay “Hobbit” Khassenov is in excellent form and now the team will face its next opponent in the Quarterfinals.

The second and third positioned teams in their respective groups will compete in the Round Of 12 to qualify for the Quarterfinals.

An interesting matchup where forZe has been one of the surprise teams to get where they are. They stand on the second spot in Group B, which goes to show how well they have performed in the league. Winning against teams like Complexity Gaming, Virtus.pro and G2 Esports. ENCE, on the other hand, sits third in Group A. Winning against an out of form Astralis, Team Spirit and Bad News Bears, they will now face a stiff challenge against forZe.

Second in Group D, Team Liquid has won four out of five matches. Their victories against NIP and FURIA confirmed their entry into the playoffs. Fnatic has also played some incredible Counter-Strike in the league. Their entry into the playoffs after defeating BIG and FaZe in a difficult Group C is an example of how good they are playing. However, they will now face Liquid, who will pose an enormous threat to their journey ahead.

Mousesports vs Ninjas in Pyjamas

Mousesports are second in their group with wins against EG, Fnatic and BIG. They will now face NIP who have scraped through in Group D with a last-ditch victory against a tough opponent like Gambit.

Sitting on the third spot of Group B, Complexity has only lost to forZe and OG. However, they face a tough challenge against Vitality, who are second in their group. With ZywOo in top form and a contestant for MVP in the league, Vitality has a high probability to win the matchup.