The value of medicinal herbs in maintaining health is an indisputable fact. Since time immemorial, the herbal remedies have proved to be effective in curing maladies. Especially Ayurveda has emphasized on the importance of herbs be it partially or wholly utilising the plant parts. Traditional medical systems are still frequently used for a variety of reasons. Increased emphasis on the use of plant materials as a source of medicines for a wide variety of human ailments has resulted from population growth, insufficient drug supply, prohibitive treatment costs, side effects of several synthetic drugs, and the development of resistance to currently used drugs for infectious diseases.

India has long been renowned as a rich repository of medicinal herbs among ancient civilizations. The forest in India is home to a vast number of medicinal and aromatic plants, which are mostly harvested as raw materials for the production of pharmaceuticals and perfumery products. In AYUSH traditions, some 8,000 herbal medicines have been codified. The use of medicinal plants is seen to be quite safe, as there are no or very few adverse effects. The fact that these medicines are in tune with nature is the largest advantage. The golden truth is that herbal remedies can be used by people of all ages and genders. 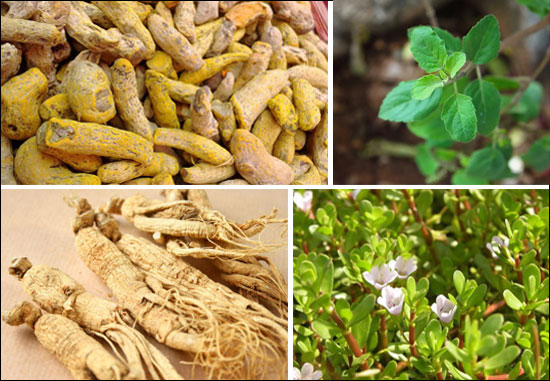 Let’s Take A Peek At A Few Of The Essential Herbs !!

It contains a number of therapeutic chemicals, the most notable of which being curcumin. Curcumin is a potent antioxidant that aids in the prevention of oxidative damage and boosts the body’s natural antioxidant enzymes. This is significant since oxidative damage is thought to be a major factor in the ageing process and the development of many illnesses. Curcumin is also anti-inflammatory, to the point that it can compete with some anti-inflammatory medicines in terms of effectiveness. It has been shown in studies to improve brain function, combat Alzheimer’s disease, lower the risk of heart disease and cancer, and treat arthritis pain.

Ginger is a popular spice that is utilised in a variety of alternative medical practises. In doses of 1 gram or more, it has been shown to effectively cure nausea in numerous studies, especially those caused by morning sickness, chemotherapy, and sea sickness. Ginger also seems to have potent anti-inflammatory qualities, making it useful for pain relief. In one trial, two grams of ginger extract per day reduced markers of colon inflammation in the same way that aspirin did in people at risk for colon cancer. It also helps in curing chronic indigestion, osteoarthritis and even helps in weight loss. Ginger is also said to be beneficial to lessen menstrual pain, lower cholesterol levels and so on…!

In India, holy basil is revered as a sacred herb. It has been shown in studies to suppress the growth of a variety of bacteria, yeasts, and moulds. Holy basil can also improve immune system function by raising specific immune cells in the blood, according to a study. Holy basil has also been associated with lower blood sugar levels before and after meals, as well as anxiety and anxiety-related depression treatment. It contains chemicals that are considered to reduce pain and edoema. Stress, diabetes, high cholesterol, and a variety of other ailments may be cured by holy basil, but there is no scientific proof to back up any of these claims.

Brahmi is a plant that grows in South Asia’s moist, swampy environments. It’s used in Ayurvedic medicine to alleviate anxiety, sleeplessness, and memory problems, among other things. The high content of triterpenoid saponins known as bacosides, which have neuroprotective and cognitive-enhancing qualities, is attributed to Bacopa monnieri’s cognitive-enhancing advantages. The plant has been shown to improve brain function and alertness in studies. Supplementing with roughly 300 mg of Bacopa monnieri extract daily increased brain function, particularly information processing speed and reaction time, according to an analysis of 9 research involving 518 persons. Although Bacopa monnieri is usually regarded as safe, some people may experience adverse effects such as digestive difficulties, and it may interact with certain drugs.

The herb ashwagandha, which has been used as an Ayurvedic treatment method since ancient times, has been shown in a number of studies to have substantial therapeutic benefits on brain function. Chemicals in ashwagandha may aid to relax the brain, reduce edema, lower blood pressure, and change the immune system. This plant is used as a general tonic to increase energy and relieve stress and anxiety, according to practitioners. Some people believe that the plant can help with cancer, Alzheimer’s illness, and anxiety. Ashwagandha is utilized for a variety of stress-related illnesses because it is traditionally employed as an adaptogen. Adaptogens are substances that are thought to assist the body cope with physical and mental stress. Insomnia, ageing and a variety of other illnesses are among the conditions for which it is prescribed, however there is little scientific evidence to back up most of these claims.

Sage (Salvia) has been shown in studies to have excellent cognitive-enhancing effects in adults. It contains luteolin, rosmarinic acid, camphor, quercetin, and apigenin, among other strong plant chemicals, which give it its amazing medical effects. Sage has been demonstrated to increase mood, alertness, attention, memory, and word recall in healthy younger and older adults when taken as a supplement. Sage, it turns out, is a potent inhibitor of acetylcholinesterase (AChE). This enzyme degrades acetylcholine, a neurotransmitter that is vital for memory, attention, and motivation.

Mandukaparni, also known as Indian pennywort, is one of India’s most popular weeds. Mandukaparni gets its name from the shape of its leaves, which resemble those of a frog. It has been examined for its favourable benefits on alertness & mood and has been used in traditional medical systems to aid boost brain function. A two-month research of 28 older persons who received daily dosages of 250–750 mg of gotu kola extract found that those taking the highest dose had better working memory, alertness, and self-rated mood than those in the control group. Loss of appetite, gas (flatulence), stomach pain (gastritis), diarrhoea, bloating, and heartburn are all symptoms of sage use. It’s also used to treat depression, memory loss, and Alzheimer’s disease, as well as to reduce excessive sweating and saliva production.

Rosemary (Rusmari) is a Mediterranean evergreen herb with a sweet scent. It’s used in cooking, as a perfume ingredient, and for its potential health advantages. Rosemary is a herb that has been shown to help prevent blood vessel damage and improve cardiovascular health. When applied topically, the therapeutic herb may aid with dyspepsia, memory function, and muscular & joint pain. Inhaling rosemary essential oil allows terpenes, which are found in the oil, to reach your bloodstream, where they can have a direct effect on your brain. According to a study published in the journal Cancer Treatment Reviews, the active element in rosemary, carnosic acid or carnosol, may also help to inhibit cancer spread. Rosemary is a strong-flavored herb that pairs well with substantial meals like meat and potatoes.

Herbs and spices not only add taste to dishes, but they also provide a wealth of important elements that are beneficial to the body. Leading a healthy lifestyle that includes balanced food, lots of sleep, and stress-reduction tactics like engaging in fun physical activity is the best way to stay energized and focused. Additionally, some herbal supplements, such as the ones described above, have the potential to improve your energy and cognitive function. People who incorporate herbs and spices into their diet may experience some benefits or health improvements, but they should not rely on them entirely for comprehensive treatment of illnesses.