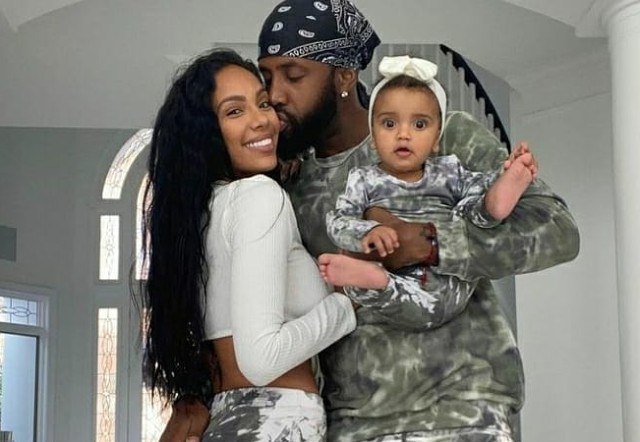 On last night’s episode of Love and Hip Hop: Atlanta (LHHATL), Erica Mena announced her expectancy of another child to her husband, Safaree. He did not have the best reaction to learning that his wife was 23 weeks pregnant, and social media was sure to shed light on the situation.

Erica tried to wait for the moment to be right before sharing the news of her expectancy with her husband. “I know things have been weird for us lately. I’ve heard you make statements like, ‘Having a baby is a lot of work,’” Mena told Safaree. “Oh, it definitely [is],” Safaree replied to his wife. “It’s lightened up maybe this much (holds fingers up to signal a little relief), but the first year is definitely a lot.”

Erica told producers during her interview segment that she was afraid to share the news of her expectancy with Safaree. “I don’t want to feel like I regret telling him,” the LHHATL star shared. “And it’s sad to say because this is my husband,” Erica continued. “I’m supposed to be ecstatic. I’m supposed to be like, ‘I can’t wait to see his face. Oh my god. How’s he going to react?’ I’m actually more scared, and that puts me in a dark place.”

Mena finally worked up enough courage to show Safaree the sonogram of their unborn child. “So, what, you’re pregnant,” Safaree asked his wife after looking at the image on her phone. “We’re pregnant,” Erica replied. Safaree gave his wife a blank stare before asking her how far along had the pregnancy progressed. The LHHATL star was shocked to learn that his wife was 23 weeks into her expectancy.

“I’m flabbergasted,” Safaree told producers during his interview segment. “I just don’t get it,” he added. “And that just goes to show how distant we’ve been. We live in the same house, she’s this far along pregnant, and I didn’t know. This is crazy.”

Safaree did not bite his tongue about how he truly felt about the news of another child. “You know how I feel about having more kids,” the recording artist told his wife. “I feel like we just started getting a rhythm with Maje (Safire) turning one, and we’re going to have to start all over again,” Safaree said.

Erica was not the only person disappointed about her husband’s reaction to the news of her pregnancy. Dozens of fans also responded to Safaree’s apparent frustration.

Safaree after Erica Mena told him she was pregnant again pic.twitter.com/78nqSO1ahA

“The fact @IAMSAFAREE acted like @iamErica_Mena was a side piece that got pregnant and not his WIFE baffles me,” one fan tweeted. “I really feel her bc no one deserves that,” the social media user added. Another of Erica’s supporters said, “It’s so crazy to see Erica Mena go thru (sic) this sh*t was Safaree on TV when the old Mena would’ve hopped across the table first and asked questions later. She’s in love love and this man is literally embarrassing her on national TV. And y’all remember all the sh*t he did to get her!? Sad.”

Safaree confirmed his and Erica Mena’s expectancy of another child earlier this year. The celebrity father also announced the arrival of their son, Legend Brian Samuels, before allegedly abandoning his family in the NICU. Legend joined his older sister, Safire Majesty Samuels, at home a few days ago after spending more than two weeks in the hospital.

If Safaree and Erica Mena’s storyline is real, that’s so sad. I feel like so many women go through this after having kids with a man. He seems completely uninterested in loving her intentionally.

Erica Mena filed to divorce Safaree weeks before giving birth to their second child. Catch up with the former couple every week on Love and Hip Hop: Atlanta!