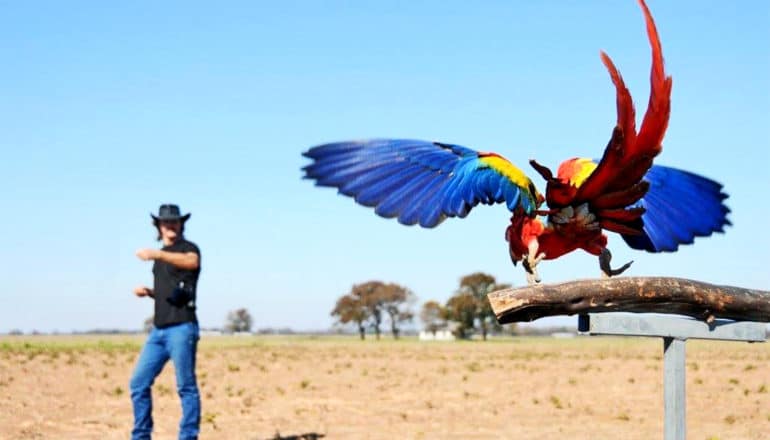 A training technique that parrot owners have practiced for decades is now being used to establish new bird flocks in the wild.

In a new paper in Diversity 2021, researchers shared their findings from a project with Chris Biro, a globally recognized free-flight trainer, that included documenting his training process step by step so that conservationists can apply his methods when releasing birds into the wild.

Biro, one of the most experienced free-flight trainers, has trained more than 400 students from more than 30 countries on how to free-fly their birds, but his process had previously only been captured via video.

“We have colleagues up and down the Americas raising and releasing birds, but their main objective is conservation and they don’t have the chance to write up a lot of the science,” says Donald Brightsmith, an associate professor at Texas A&M College of Veterinary Medicine & Biomedical Sciences (CVMBS).

“A&M’s role in this project is to make sure that this information gets put into a place and a format so the rest of the world can read it, criticize it, use it, and improve it. If information hasn’t made it into scientific literature, it’s not improving the future of the science of macaw and parrot conservation, it’s just helping one or two populations.”

These 37 birds, which collectively spent 500 months in free-flight, were hand-raised from chicks to build a strong bond with the trainer before being gradually taught new commands and introduced to increasingly complex environments to learn the skills necessary to safely fly in open, uncontrolled areas.

“As scientists, one of the most important things we can do for conservation is offer ready-to-use solutions for practitioners on the ground who are trying to save animals and ecosystems,” says Woodman, who now serves as program manager for the CVMBS’ Conservation Innovation Grant program. “By learning from communities that already work with the target species, in this case parrot owners and trainers, we can take their knowledge and transform it into a conservation tool.”

The birds learned to recognize, evade, and even intimidate predators; forage for food and recognize safe vs. unsafe options; fly in flocks; navigate and mentally map the environment; and avoid unsafe situations, like dogs and cars. During the entire training process, Biro’s methods proved successful—neither trainer lost a single bird to predators or had a bird leave the training area.

As the next step in this process, the team will work to adapt the training in support of parrot conservation. Texas A&M and Biro’s nonprofit, Bird Recovery International, will be among the first to test free-flight as a conservation tool through collaborative projects in Brazil and Honduras.

Traditionally, attempting to release hand-reared parrots has resulted in birds that show little fear of humans, which increases their chances of being trapped by poachers or killed by people.

By using a “kernel flock”—human-socialized birds trained in free-flight—to teach survival behaviors to other parrots, conservationists should be able to release wild birds without having to train them themselves.

“The idea of using a kernel flock is a way to cut the difference when human socialization is not desirable in your wild birds,” Woodman says.

“This is a really, really important project,” Biro says. “For example, the Spix’s macaw is extinct in the wild and there are only about 150 or so left in captivity. One of the problems of putting the Spix’s macaw back into Brazil is that there are limited options for introducing birds into environments where no flock exists. This project produces a flock where there isn’t one.”

There are many groups of animal keepers, fanciers, and breeders with specialty knowledge, “but they may not be plugged into conservation communities,” Woodman says.

“The work we’ve done—spending years working with a group to learn how they do what they do and then translating that into something useful for scientists and practitioners—is critically important to moving conservation forward.”

For parrot owners who are interested in learning free-flight, Woodman recommends finding a local free-flight community to learn more.

“Free-flight is highly technical and it almost requires an apprenticeship-type learning system to do well, just like with falconry,” Woodman says. “To free-fly a parrot safely, you’ve got to be involved in the free-flight community, because there’s always a risk of losing an animal and that risk goes up without proper training.”