fugitive 'fat leonard' was captured at a venezuela airport trying 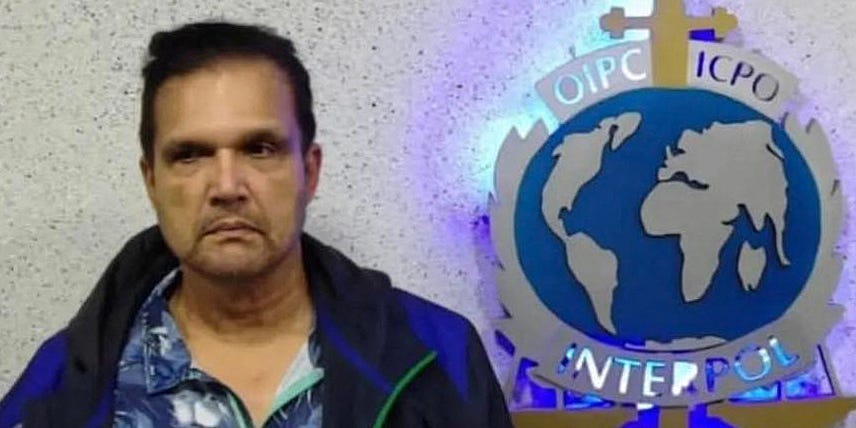 This undated handout picture released on September 21, 2022 by the Instagram account of Interpol Venezuela shows Malaysian fugitive Francis Leonard Glenn, known as Fat Leonard, after his capture in Maiquetia, Venezuela.

Leonard Glenn Francis, who pleaded guilty to involvement in one of the US Navy’s worst corruption scandals, was captured in Venezuela after he recently escaped house arrest in San Diego and went on the run.

Francis, a former military contractor who is also known as “Fat Leonard,” was captured at an airport while trying to flee the country, Interpol Venezuela said in a Wednesday statement shared to Instagram. The agency said Francis entered the country via Mexico, with a stop in Cuba, and planned to travel to Russia as his final destination.

Authorities said he was captured at Simón Bolívar International Airport, just north of Venezuela’s capital city Caracas. Francis will be handed over to Venezuela’s judicial authorities, who will then initiate an extradition process, Interpol said.

Earlier this month, Francis, a Malaysian national, was waiting to be sentenced for his role in a a Navy bribery scandal when he cut off his GPS monitoring ankle bracelet and fled his San Diego home.

After a federal agency monitoring Francis realized he fled, law enforcement officials went to his house only to find nothing there except for the tracking device, Deputy US Marshal Antonio Kirby previously told Insider. Immediately, a slew of law enforcement agencies — including the Marshals — began desperately hunting for Francis.

“We are under the impression that this was pre-planned — neighbors did inform the Marshals Service that they did see U-Hauls coming and going over time,” Kirby told Insider at the time.

The US Marshals Service confirmed Francis’ capture in Venezuela to the Associated Press. The agency could not be immediately reached by Insider for comment on Thursday.

Interpol Venezuela said in its statement that Francis was wanted on “red alert” by the “central national office in Washington for bribery and corruption.”

According to the agency, this designation is “issued for fugitives wanted either for prosecution or to serve a sentence” and is “a request to law enforcement worldwide to locate and provisionally arrest a person pending extradition, surrender, or similar legal action.”

There was no immediate notice of when, exactly, Francis could be extradited to the US. Additional issues could also surface given that the State Department does not recognize Venezuelan President Nicolas Maduro’s government, which has been accused by the United Nations of human rights violations and repressive tactics.

When he fled, Francis was waiting to be sentenced for his role in a corruption scandal that involved dozens of of people, including US Navy officers, and his Singapore-based contracting firm — which serviced Navy ships in ports around Southeast Asia.

Prosecutors say Francis bribed the officials with hundreds of thousands of dollars for work opportunities and classified information and that he overcharged the Navy by more than $35 million. Court documents reviewed by Insider show that he was arrested in 2013 and pleaded guilty in 2015 to conspiracy to commit bribery.

At Francis’ hearing on Thursday, US District Court Judge Janis Sammartino said a “no bail arrest warrant” was issued for Francis, according to the AP, and set a new hearing for him on December 14.

Some men in white-collar jobs like banking and IT won’t be drafted to fight in Ukraine, Russia’s defense ministry says

How Peloton went from a pandemic-era success story worth $50 billion to laying off more than 4,000 workers and losing 4 top execs in a month

Cuba votes to legalize same-sex marriage, decades after LGBTQ people in the country were persecuted and sent to labor camps

The US dollar will stay ‘stronger for longer’ against global currencies as the Fed commits to taming inflation, UBS says

Elon Musk was texting Larry Ellison ‘into the early morning hours’ just before announcing his Twitter purchase was on hold, a new court filing says