In June 2021, I previewed a trilogy of Reiner Knizia designs coming from new U.S. publisher Bitewing Games, with a Kickstarter project for those games suggesting delivery in mid-2022. Thanks to mock-up copies from Bitewing Games, I’ve now played all three games, so I thought I’d elaborate on gameplay beyond the more abstract descriptions of my previous post.

Let’s start with the 2-5 player card game Pumafiosi, a revised version of 2004’s Rooster Booster. The game includes a nine-space ranking chart, with values on those ranks that range from 10 to -3. Each player starts with a deck of ten cards, with cards ranging in value from 1-55, but has only three in hand at a time.

Each turn, each player plays a single card in turn, then whoever played the second-highest card marks that card with a token of their color, then places it on a rank that is either empty or occupied by a card with a lower number; in the latter case, that lower card is bumped down a rank, and if a card is in that spot, the lower-valued card is bumped down again, etc. Each time one of your cards drops a rank, you receive 1 negative point. Players fill their hands to three, then keep playing, completing ten “tricks”, after which players score points based on the value of the ranks that their cards occupy. (If you occupy no ranks, you receive 10 negative points.) Play three rounds in this manner, then whoever has the highest score wins.

Based on my single game of experience, Pumafiosi seems fairly random both in the individual tricks and in the larger question of how to compete on the rank chart. Each player has only three cards in hand, so you have limited options in what to play and often feel like you’re winging it — although as the round proceeds, you have a better idea of which cards your opponents might play based on what’s been played previously, assuming you can track played cards to some degree. In general, you want to win with the highest card possible to keep it from being bumped, but at the end of a round, you can possibly land a lower-valued card in an unoccupied top rank and have it stick when all the subsequent winning cards are even lower.

In short, Pumafiosi is something of a wild ride, with surprise wins and losses on a scale both small (each trick) and large (the overall ranking). This description carries over to the other two titles in “The Criminal Capers Collection”, which isn’t surprising given that Bitewing is marketing them as a trilogy.

Hot Lead is also for 2-5 players, and each player starts with a hand of 11 investigator cards from a deck of cards numbered 1-55. A separate deck of 55 criminal cards is shuffled, with criminals coming in five colors, with cards valued 0-5 in each color.

If you catch a fourth criminal of the same color, you discard all criminals of that color — and you might inadvertently do this since you receive 10 points for having a trilogy of criminals of the same color, which means you’re incentivized to go deep, but you often lack control over what you might win. You also score points equal to the sum of the criminals in your collection, which incentivizes you to grab high numbers, with an added 10-point bonus should you have one criminal of each color, which incentivizes you to go wide.

As in Pumafiosi, in Hot Lead you’re playing somewhat randomly at the start of the game, with only the 1 and 55 guaranteeing you a certain criminal card. Initially all that matters is nabbing high-value criminals, but by the third or fourth card, players start getting invested in colors — especially if you use an optional scoring element that gives 5 points to whoever first catches two criminals of a color — and you have a better idea of who is shooting for which cards. You still have no idea which numbers might win you a card, mind you, but you can make educated guesses and be surprised and laugh when your card barely edges out someone else to stick them with a 0. The game is about fun small moments, with a teaching time that barely tops 60 seconds. 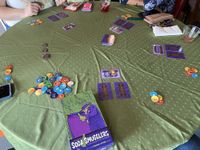 Unlike the previous two titles, Soda Smugglers is for 3-8 players, and it features gameplay reminiscent of Hart an der Grenze / Sheriff of Nottingham, but stripped to the absolute core. Players are trying to smuggle soda into the country, and they also take turns being the customs agent who is trying to foil such smuggling, while possibly enriching themselves along the way.

Each turn, all the smugglers are dealt five suitcase cards, with each suitcase containing 0-3 bottles. A smuggler places two suitcases face down to represent what they’re bringing into the country, then a third suitcase separately face down as a bribe to the customs agent, while discarding the remaining two cards. All players then reveal their bribes at the same time. The customs agent can accept 1-2 bribes depending on the player count, with the smuggler paying the bribe out of their stash to the agent, after which they reveal their suitcases and receive money equal to what’s inside.

The customs agent can then inspect 1-2 suitcases, flipping them face up to reveal their contents. Finally, the agent can arrest 1-3 people. For an arrest, you reveal both suitcases of that player, and if they are carrying at least two bottles, the agent is paid from the bank for those bottles instead of the player; if the smuggler has 0-1 bottles, then the agent must pay 2 money from their personal holdings to the smuggler as hush money. After all the arrests have been conducted — and arrests, like all of the other actions, are optional — all the remaining smugglers reveal their suitcases and cash in.

Whether you’re smuggler or agent, Soda Smugglers is all about bluffing and reading bluffs. Is that person putting out a large bribe because they want me to let them through and they’re willing to share the profit? Should I let them jump ahead like that? Should I arrest them instead? Or are they making a large bribe because they want me to arrest them when they actually have nothing?! If you investigate and find a suitcase with 2-3 bottles, then you have a definite target for arrest — but if you as a smuggler never stash 2-3 bottles, then you’re probably not going to win. The challenge isn’t deep, and it’s more about the “gotcha” moments than anything else.

For more examples of gameplay, check out this overview video: