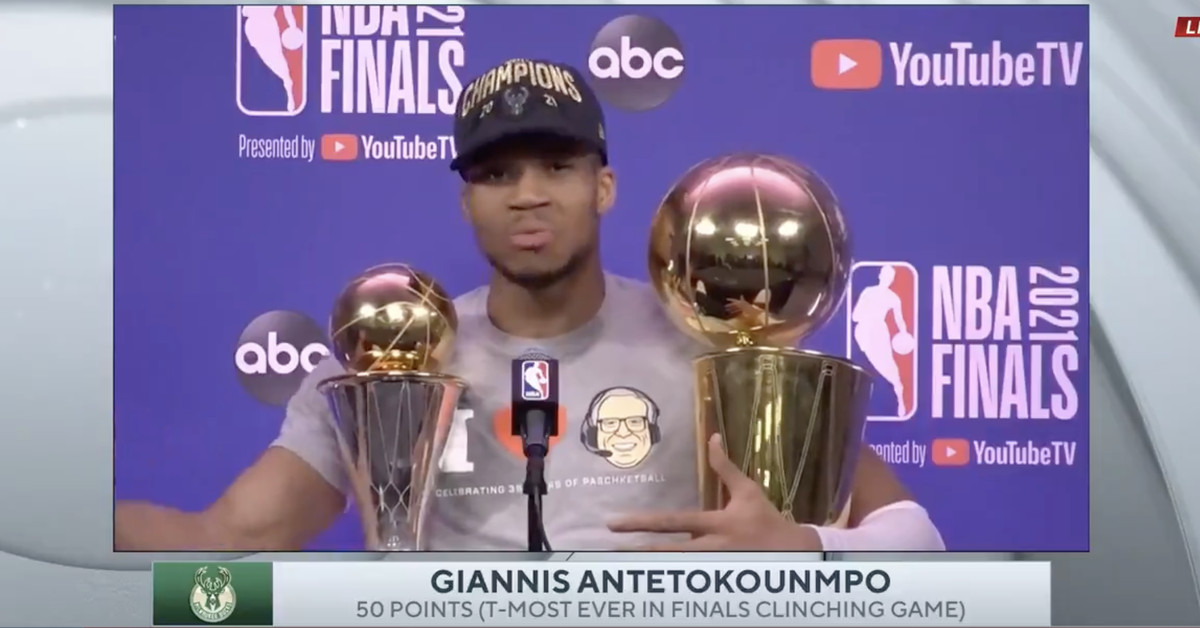 “I could go to a superteam, and just do my part to win a championship. But this is the hard way to do it, and we did it.”

Giannis Antetokounmpo put together one of the greatest performances in NBA Finals history to carry the Milwaukee Bucks to a Game 6 victory over the Phoenix Suns to claim the franchise’s first championship since 1971. Antetokounmpo turned in a monstrous effort on both ends of the floor to finish with 50 points, 14 rebounds, and five blocks, and even hit a remarkable 17-of-19 attempts from the free throw line. He was of course named Finals MVP when the buzzer sounded.

Giannis’ historic Game 6 punctuated what was already an incredible individual showing in the Finals. Despite being questionable for the series after sustaining a scary leg injury that kept him out for the last two games of the Eastern Conference Finals, Antetokounmpo was a go for Game 1 and immediately proved himself to be the best player on the floor. He had 40-point performances in Game 2 and Game 3, made a ridiculously clutch block to secure the win in Game 4, and threw down an alley-oop over Chris Paul to cement Milwaukee’s win in Game 5.

As Antetokounmpo met the press after his amazing performance on Tuesday night, he delivered a quote that put his accomplishment into context. It also served as something of a call-out to other stars around the league.

“It’s easy to go somewhere and win a championship with somebody else … this is the hard way to do and we did it.”

Giannis Antetokounmpo talks the talk after winning it all #NBATwitter pic.twitter.com/xoUJnmgIA3

“Obviously I wanted to get the job done,” Antetokounmpo started. “That’s my stubborn side. It’s easy to go somewhere and go win a championship with somebody else. It’s easy. I could go to a superteam, and just do my part to win a championship. But this is the hard way to do it, and we did it.”

Maybe Giannis didn’t mean to fire shots at his superstar peers, but it sure came off that way. He’s also not wrong.

Before the season, Antetokounmpo signed a five-year extension with the Bucks when it was widely speculated he would have to leave to win a championship as he approached his third contract. LeBron James left the team that drafted him for his third contract to form a superteam in Miami, where he finally won his first NBA championship. Kevin Durant did the same thing in Golden State. Anthony Davis chose to force his way out of a small market in New Orleans to eventually win a title with the Los Angeles Lakers. James Harden demanded a trade from the Houston Rockets to go to a superteam in Brooklyn.

Giannis could have followed that same path. He could have turned down the Bucks’ extension, tested free agency, and signed with a team that already had another superstar in place to give himself the best chance to win a championship. He didn’t do that. Instead, he stuck around and led the Bucks to a championship himself at 26 years old.

Antetokounmpo had help on his way to a title. Khris Middleton was a brilliant shot-maker throughout the series who carried the Bucks during certain stretches. Jrue Holiday put on an all-time defensive clinic in the NBA Finals and had several good games offensively. Role players like Bobby Portis and Pat Connaughton stepped up, and Brook Lopez was as steady as ever.

There’s no doubt who powered this title, though. Antetokounmpo was phenomenal and his teammates were just good enough to give him the support he needed. Game 6 was the ultimate proof of that: Giannis scored 50 points and the rest of the starters combined for 39 points. Giannis had five blocks and the rest of the team had one.

When James and Durant won their titles, dopes on social media claimed it wasn’t a ‘real’ championship because they needed to team up with other superstars. That criticism was always stupid, but Antetokounmpo winning with the small market team that drafted him sure does feel a little more meaningful, just as it did when James returned to Cleveland and led the Cavs to a miracle championship in 2016.

Giannis did it the hard way, and then he told the world he wasn’t about to join a superteam to make this championship a reality. Talk about a flex.

As Milwaukee celebrated its championship, an old tweet from Antetokounmpo resurfaced. Giannis sent this one after his rookie year when he averaged about seven points per game as a skinny kid from Greece by way of Nigeria who just got drafted No. 15 overall. He called his shot.

I’ll never leave the team and the city of Milwaukee till we build the team to a championship level team..

Seven years later, Giannis made good on his promise. He didn’t even need to form a superteam to do it.