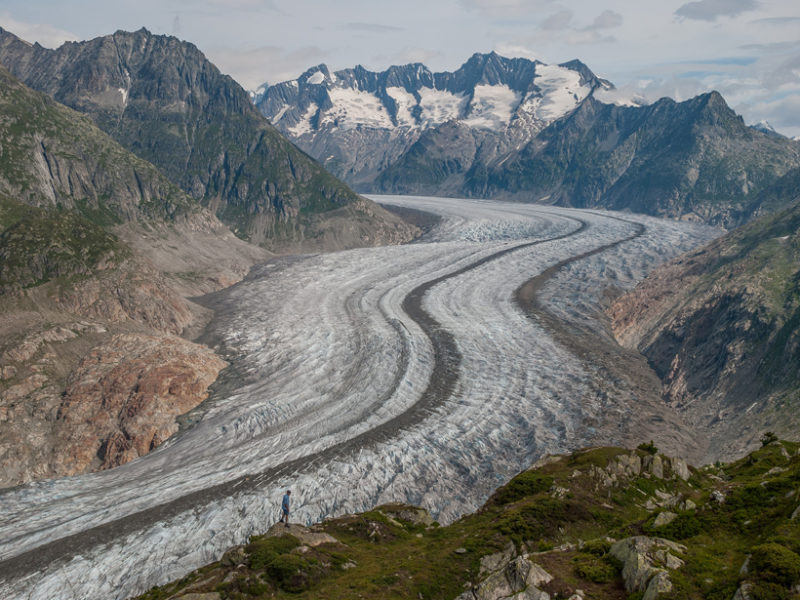 A consequence of the climate emergency is the melting of glaciers around the world. Melting is revealing their internal structures in remarkable detail, as snow is removed and the surface is stripped bare. We can now see that ice structures record an intricate record of present and past glacier dynamics, a record that commonly cannot be ascertained by other means. By combining structural glaciological techniques with satellite remote sensing, the flow characteristics of large and remote ice masses, both globally and extra-terrestrially, can be determined, potentially revealing flow histories that extend over centuries to millennia. A recent article published in Reviews of Geophysics gives a synopsis of nearly two centuries’ worth of structural glaciological investigations, and highlights the major challenges yet to be tackled.

Why is it important to understand the dynamics of glaciers and ice sheets and how they are changing?

Approximately 10 percent of the Earth’s land surface is covered by ice, which has a significant influence on global climate, ocean cycles, as well as on human activities.

These processes are leading to the collapse of ice shelves, altering how glaciers flow, and increasing ice discharge into the ocean.

It is important to understand these dynamic changes in order to predict potential future impacts on humanity. On a global scale, such impacts include raising of sea level and changing climate and ocean cycles, while on a regional scale changes in water security are an increasing threat to mountain communities and the vast populations that live downstream.

Why is it important that glaciers be studied in four dimensions?

We need to consider the study of glacier structures as a four-dimensional exercise. We observe and map glacier structures spatially in two dimensions, in plan view, to determine the range, pattern, and inter-relationships of the different structures. The third dimension combines recording the orientation of structures at the surface with ice-penetrating radar measurements. The fourth dimension is time, which requires us to look back at historical records revealed in old photographs and satellite imagery and figure out how structural changes take place from what is visible today.

What is the structure of a typical glacier?

All glaciers, regardless of size, are composed of layers of snow that build up in the upper reaches of an ice mass, become buried, and transform into glacier ice as they are increasingly compressed by the overlying column of snow.

We refer to the initial snow layering as stratification, and this represents the ‘building blocks’ of a glacier. The majority of other structures are the result of how the glacier flows under gravity, a process that produces a complex array of structures. Firstly, where the ice deforms in a brittle manner, crevasses (V-shaped clefts in the ice) and a variety of fractures develop, which can be a major hazard for glacier travel. Secondly, ice also deforms in a ductile manner, leading to the development of a variety of folds, foliation (a layered structure commonly visible in glaciers), and a variety of lesser-known structures. 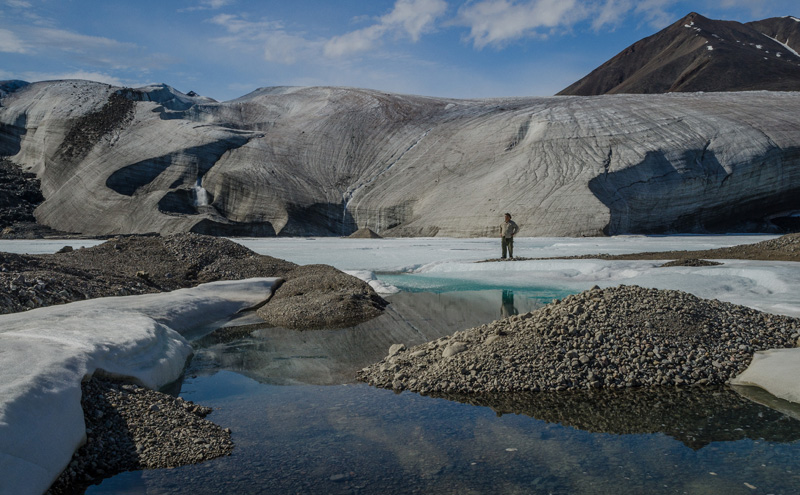 The terminus of Fountain Glacier, Bylot Island, Canadian Arctic, in which a wide range of structures are displayed, the most prominent of which are the traces of former crevasses. Credit: Michael J. Hambrey

How does our understanding of structures found in rocks help us understand the structure and behavior of ice, and vice versa?

However, if we apply structural geological principles to glaciers we can advance our understanding of glacier dynamics, notably because the same range of structures occur in both rock and ice.

Conversely, we can observe structures in glaciers forming on human timescales, reflecting the same processes that occur in rocks many kilometers below the surface of the Earth on a time scale of millions of years. This means that glacier ice deforms up to six orders of magnitude quicker than rocks in active mountain belts, and therefore a glacier can be considered as an analog of rock deformation. Consequently, glaciers can be used as natural laboratories that enable geologists to directly observe the formation and development of structures.

What does glacier structure tell us about changes on different spatial and temporal scales?

The advent of satellite remote sensing has revolutionized our understanding of inaccessible glaciers and ice sheets. However, satellite measurements only extend back for approximately half a century. As ice structures form in response to how a glacier flows, they preserve a record of glacier dynamics that covers the time that ice follows a path through the glacier system. In comparatively small valley glaciers, ice residence times can span centuries, increasing to millennia or even a few million years in the Antarctic Ice Sheet. Ice structures therefore have the potential to inform scientists about how glaciers have behaved in the past and how they have changed over time.

How might a structural approach be of use in other sub-disciplines of glaciology?

Ice structures have a fundamental, yet often overlooked, influence over many other aspects of glaciology. For example, glacier structures play a large role in the routing of meltwater through a glacier, dictating how water gets to the glacier bed, which in turn controls how quickly the glacier flows. Structures also strongly influence how debris is transported in glaciers, and this has an impact on how many glacial landforms are interpreted. Glacier structures also control the distribution of microbial life living on the surface of glaciers, and structural glaciology is a useful tool for exploring the mechanisms of glacier recession. All of these topics have a great deal of untapped potential for further study. 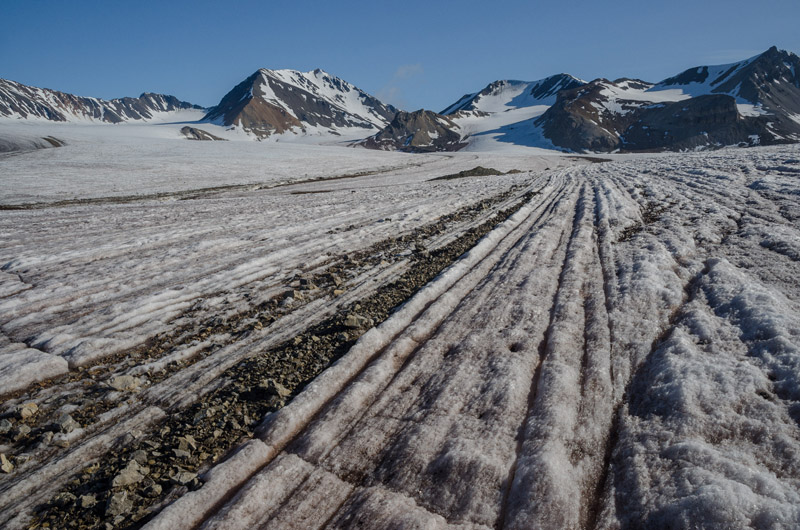 The corrugated surface of the valley glacier Austre Brøggerbreen in Svalbard (Norwegian High-Arctic) in summer 2013. This is a product of weathering of different ice structures, especially longitudinal foliation and the traces of former crevasse. Credit: Michael J. Hambrey

Where is further research, data gathering, or modeling needed to advance our understanding of glacier dynamics?

Some advances have been made in replicating the formation of glacier structures in computer models, especially regarding pervasive structures such as foliation. Modeling other structures, such as fractures, has proved more elusive, but the challenge can be met using more powerful computers.

With the rapidly growing amount and quality of remote sensing data, the scope for structural studies has grown enormously. We have only scratched the surface of the potential research opportunities here, but it is clear that structural principles can then be applied to unraveling the history of many inaccessible ice masses on Earth, and even on Mars.

Scaling down to the microscopic level, there also remains the untapped potential for structural glaciology to illuminate the recently emerged field of cryospheric microbiology. These new opportunities demonstrate that there has never been a more exciting time to engage with the field of structural glaciology.