i can speak to aliens after visiting ancient pyramid

A WOMAN has claimed she can communicate with aliens after visiting an ancient pyramid and says she has a message for mankind.

The bizarre claim was made by Mafe Walker, 45, who says she speaks a secret alien language after a recent trip to the ancient Teotihuacan pyramids, outside Mexico City. 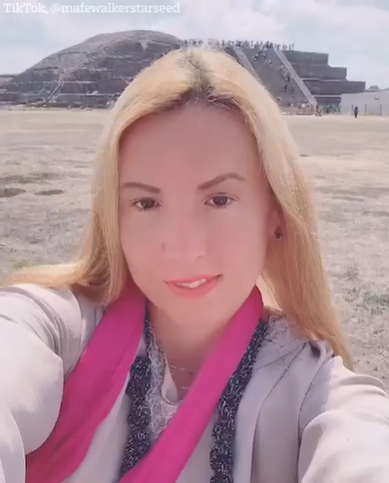 Mafe says she can contact aliens using a secret language 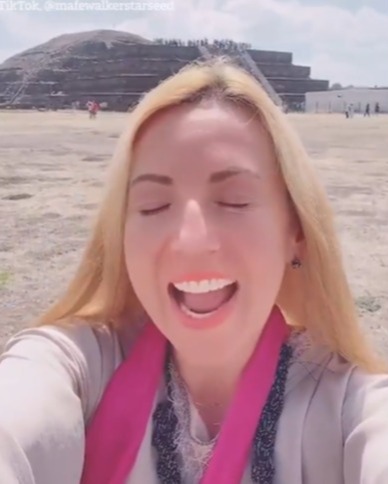 The Tiktoker says the extraterrestrials have a message for humans

The Colombian TikToker has posted a video explaining that while she was at the site, aliens gifted her with the ability to communicate with them.

Since then she has shared a series of clips of herself standing outside various locations, speaking the “secret language”.

The woman can be seen speaking a mixture of gibberish, Spanish and English- but she has never explained why she films these videos.

One of her followers commented: “The aliens: well we didn’t say that, that’s how the gossip starts!!”

Another one said: “I already realized that the aliens are very loving, they love each other and they love us”

One said: “I tried to repeat what he said, and ended up summoning 3 demons”.

The 45-year-old also claims to be a medium for the message the extraterrestrials are trying to send to the human race.

During her appearance on the Mexican morning show Venga la Alegría, Mafe claimed she is a telepathic guide to “a galactic portal.”

She said that aliens want to contact humans because they feel “immense love.”

The woman who also claims she has managed to enter other dimensions says her body generates vibrations through a special frequency she emits and that’s how she is able to connect with aliens.

In an interview La FM, she said that she had the gift of speaking with aliens since she was a child, but she lost it as she grew older- until 2012 when she got the power back.

Since then the Tiktoker works as a medium and offers sessions for $75 per person that can take place in the pyramids of Teotihuacán, in Cholula or in Mexico City’s Chapultepec Park.

Through these sessions, she helps her customers activate the galactic codes “that we all have in our DNA,” El Pais reports.

We pay for your stories!

Do you have a story for The Sun news desk?

Share
Previous How to See an Archive of the Posts You’ve Liked on Instagram
Next Iran, Oman Ink 12 Agreements during Presidential Visit – Politics news

Amazon Workers Say No To Unions

Douglas Todd: Forget the separation of church and state

US singer R. Kelly sentenced to 30 years in prison for sex crimes

News of the Day From Around the World, May 14

Greenpeace activist rescued after getting stuck in Theodore Roosevelt’s nostril

Heat pumps instead of oil and gas?

Give traditional holidays the boot — and stay in one instead

GIVE traditional holidays the boot — and stay in one instead. The property in Nelson, …