i'm a joint rolling technician. getting paid to bill up

I’m a joint rolling technician. Getting paid to bill up a doobie makes this my dream job. 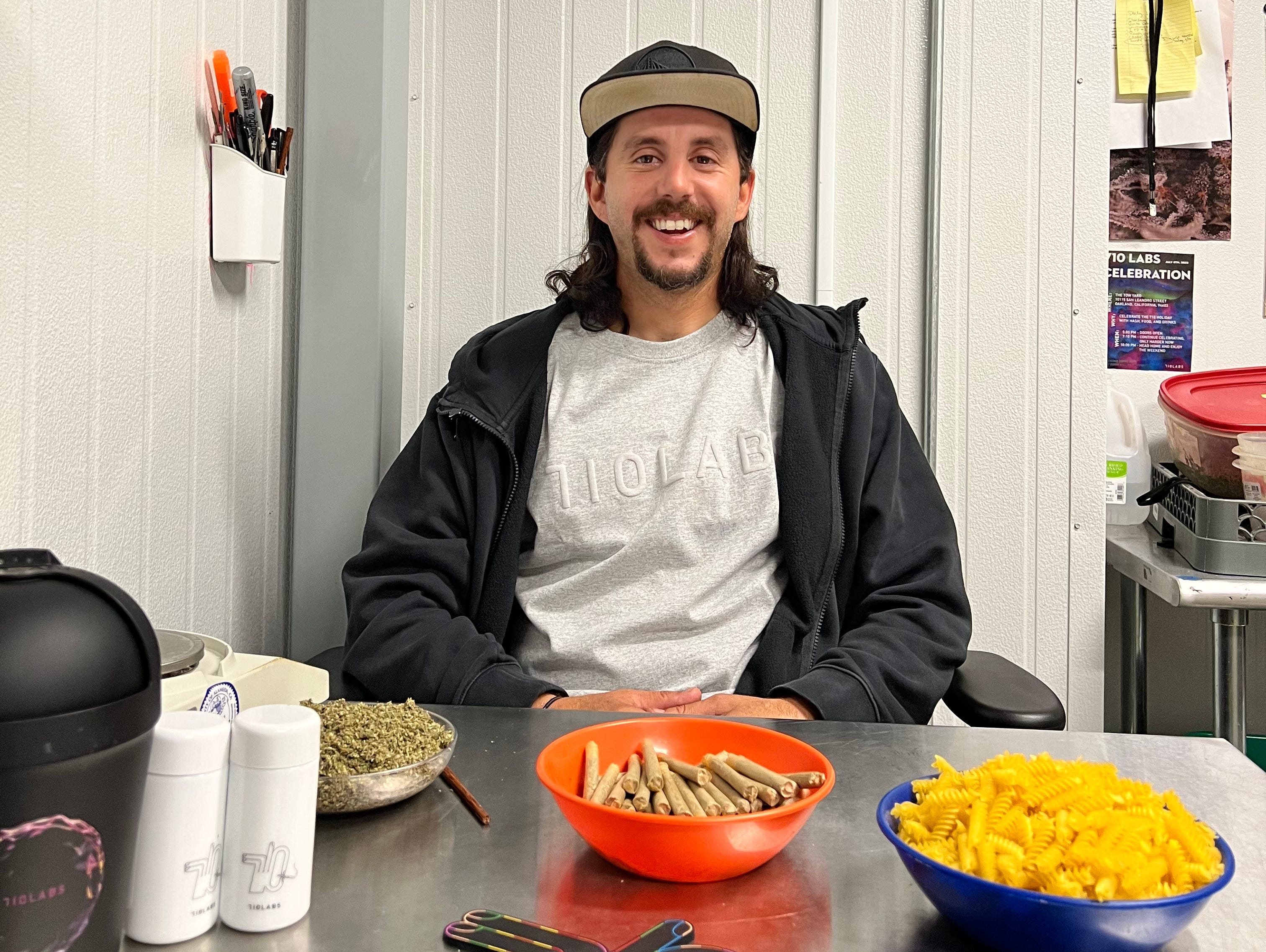 I was asked to roll 500 joints in two days as part of the application process. I had personal experience with cannabis and rolling joints, but never had I sat down at a table and tried to crank out hundreds at a time.

I got about halfway but they were satisfied with what I was able to provide. Eventually 710 Labs offered me a full-time position, which I was extremely excited about. It’s a dream job.

I’ve been doing this for just under four years. The founder of 710 Labs, Brad Melshenker, is a friend from college and remembered I could roll a good joint and reached out to me.

He wanted to change the bad reputation that pre-rolled joints had and offer a premium product using only the best material. I really liked what they were trying to do.

So I started rolling joints for them and helped establish its joint rolling department. Now we’re up to a team of seven people in total.

Before I got this opportunity, I would never have dreamed that being a professional joint roller was something I could do for a living.

On a typical day I usually try to roll up to 300 joints per shift. My process at this point is very muscle memory for me. Each one comes out the same and I can roll at least 60 joints an hour.

I have a different technique to most people. Most rollers use a freehand technique where they hold it above the table and form it with their fingers. I prefer to roll on a table, so the joint never comes off it. It’s similar to the way sushi would be rolled. 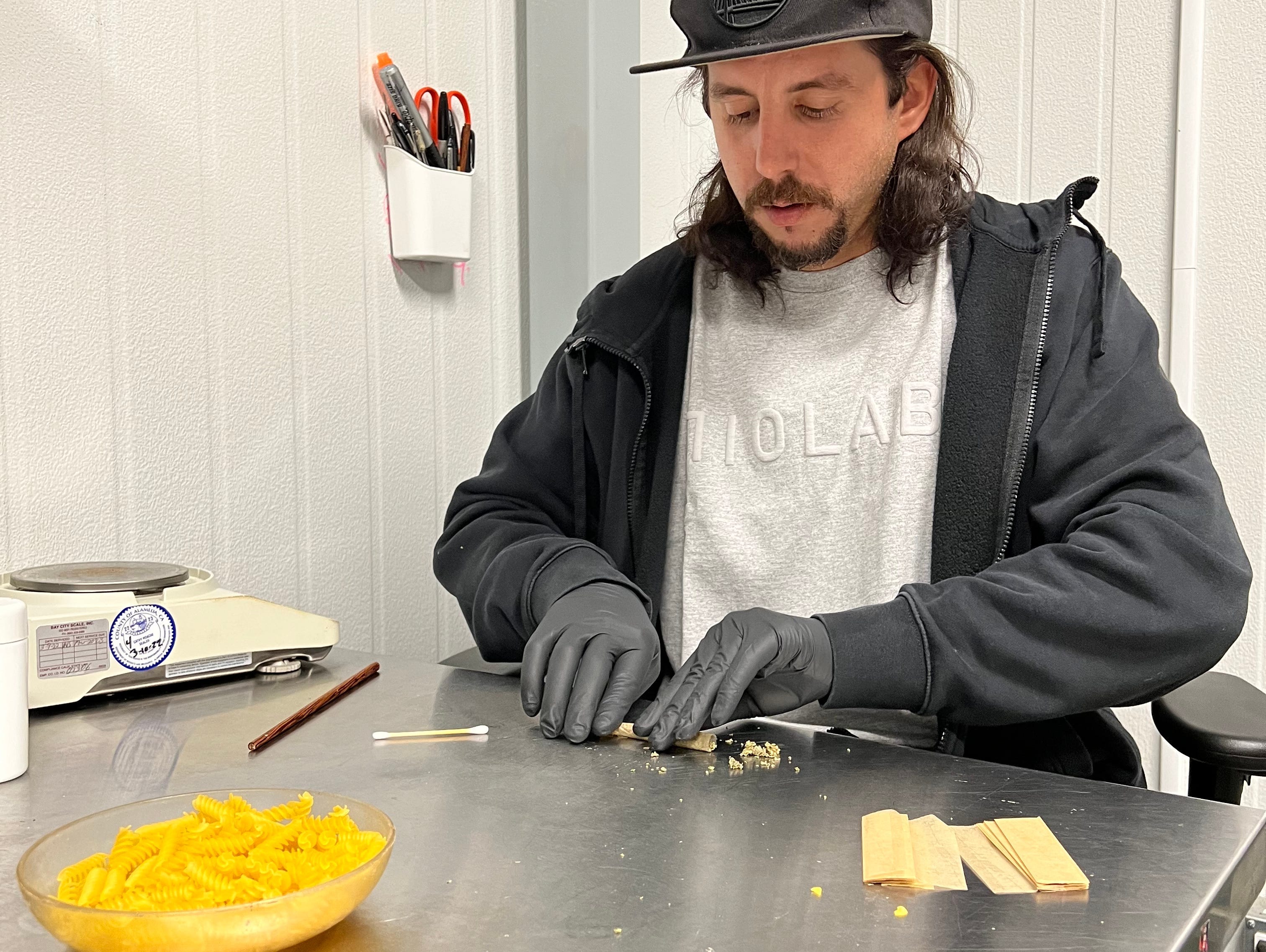 Thomas Indigaro chooses to roll joints on top of a. table.

We use a spiral-shaped rotini pasta as the filter or roach. We just snap it in half and use the favorable end as the mouthpiece and it provides a cool, vortex-like smoke effect. It gives great structure to the joint as it is rigid and nice to hold on to, instead of either no filter or one made from cardboard.

I’ve had a lot of different jobs over the years, everything from working in restaurants to tourism and hospitality and home improvement. Out of any job that I’ve held, being a joint roller is the best job that I’ve had.

We do a practical evaluation when we’re looking for new joint rolling technicians. We look for people who take pride in their ability to craft a quality joint. We’ve created a career path for this unique skill set and our entry-level joint roller technician starts at about $20 an hour with full benefits. (Insider has viewed documentation to verify the hourly rate of pay.)

It’s preferable that you have personal experience with cannabis. It makes the job a lot easier and more fun if you already love cannabis. There aren’t any requirements other than your ability to craft a joint at a reasonable speed. We don’t compromise quality at any step, but you can’t take all day to roll one joint either.

One difference in being a professional joint roller, rather than a recreational one, is how we seal the joints.

Typically at home I just lick it closed on the gum line. Here, for sanitary purposes, we don’t use saliva to close joints. We use Q-tips with distilled water instead and roll while wearing gloves.

The work atmosphere is great. It’s a bunch of really great people with a love for cannabis doing what we love. It’s a vibe.

US home prices could sink as much as 15% in a market crash but a moderate downturn is still more likely, Fitch says