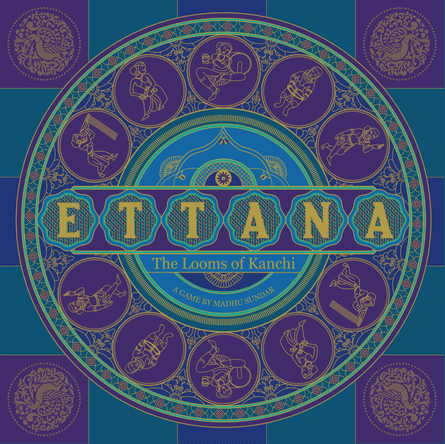 • Ettana: The Looms of Kanchi is the first design from Madhu Sundar and the first release from new publisher Mad4Fun Games in Bangalore, India. The game is available for purchase online (store link), but is not available in distribution yet as far as I know.

Here’s an overview of the game’s setting and how to play:

Indian handlooms date back several centuries. The tradition of weaving by hand formed a part of the country’s cultural ethos. A piece of fabric with a design could indicate the meaning, its purpose, the culture of the era, and even the way the people lived. Handlooms thus became a precious part of the generational legacy and exemplify the richness and diversity of a country and the artistry of the weavers.

Innovative weavers with their skillful blending of myths, faiths, symbols, and imagery provide the fabric an appealing dynamism. The appeal of the handloom lies in introducing innovative designs that cannot be easily replicated. This rich tradition of hand weaving still thrives at Kanchi, a prominent temple town in South India. Fabrics were part and parcel of trade done by the Indian weavers for which they got back “Annas” or goods in return.

Ettana: The Looms of Kanchi, players take the role of weavers to complete designs and be the first to make eight “Annas” (victory points). In detail, set up the 5×5 game board by placing one of 25 yarn discs (five of each in five colors) on each space, then place 16 of the 18 number tiles (three each of the numbers 1-6) at the intersections of the spaces on the game board; place the remaining two number tiles on the side in the reserve, along with one yarn disc of each color. Each player receives a random action card, a random design card, and two tokens with a value of 1. Each player places their pawn on one number tile.

On a turn, you roll the two dice: a color die and a number die. If a player’s pawn is touching a space that shows the color rolled, they receive a 1 token; if the die shows black, which is not a yarn color, you take an action card and no one else gets anything. You can then move your pawn as many spaces as the number rolled, after which you can swap two yarn adjacent to your location. Additionally, you can play as many action cards as you wish, and you can pay tokens to take design cards, take action cards, and swap any two yarns. Action cards allow you to move, swap, gain tokens, replace a yarn or number with one from the reserve, etc.

If the pattern of yarn on the board matches a design card in hand, you can reveal that card to score its points. As demonstrated in the image above, you don’t have to match the precise colors — only the pattern; in this case, you need a line of three in one color, with two diagonal legs each in a separate color.

• Spanish publisher Megacorpin Games debuted in 2016 with Awkward Guests, and in September 2021 it plans to Kickstart (preview link) another deduction game from designer Ron Gonzalo García that uses his “Brilliant Deck System”.

Here’s an overview of the 1-6 player game ScandalOh!:

ScandalOh! is a deduction game about investigative journalism in which each playing presents a different scenario, and players have to bring a scandal to light.

—WHAT is the scandal plot?

—WHICH celebrity is behind it?

—WHICH newspaper will make it public?

The game challenges you to use genuine investigative abilities to solve each case. To get the scoop, you have to keep an eye on the celebrities and their contacts, question the newspaper editors, search for clues anywhere in the city, and consult your sources. You do all of this while exchanging information with your opponents or hiding it from them, so get ready to use all your deductive skills!

The heart of ScandalOh! is simple: Players have a hand of seven cards, and each card has a value (1 or 2 points, according to the amount of information that it provides) and several references (i.e., the subjects of the card information). During a turn, you ask for information about three different references in which you are interested. The rest of the players can offer you cards that contain the requested references, and you can trade for those cards by giving the offering players the same number of points they have offered via cards in your hand.

• Taiwanese publisher Moaideas Game Design has a new design coming from DuGuWei, who designed the fetching, yet little seen game Yin Yang in 2019.

Here’s an overview of Jiangnan: Life of Gentry, which will be Kickstarted in October 2021:

Jiangnan: Life of Gentry is a 1-4 player worker-placement and action tile bag-building board game about life in Ancient China where players are literati artisans searching for inspiration to compose and present great literary works at the capital city of Nankin; however, aristocracy is fickle. Will you follow the latest trends or start them?

In the game, players are part of the elite gentry class living in “Jiangnan”, the prosperous region to the south of the Qinhuai River. As part of your education for attending the Imperial Scholar-Official exams, you are highly skilled in literature, calligraphy, brush painting, and the musical and performing arts — but becoming a bureaucrat is not your cup of tea; you’d rather follow your passion and thrive to compose great works of arts, publishing everlasting classics to be sung and studied for a hundred thousand years.

More images and game details are on the Moaideas website.