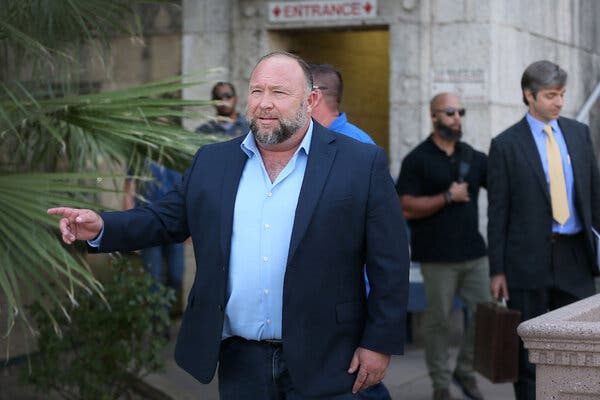 Testimony on Friday indicated that Alex Jones and a company he controls were worth $135 million to $270 million.Credit…Pool photo by Briana Sanchez

AUSTIN, Texas — A Texas jury ordered the conspiracy theorist Alex Jones on Friday to pay the parents of a child killed in the 2012 Sandy Hook school shooting $45.2 million in punitive damages for spreading the lie that they helped stage the massacre.

The jury announced its decision a day after awarding the parents more than $4 million in compensatory damages and after testimony on Friday that Mr. Jones and Free Speech Systems, the parent company of his misinformation-peddling media outlet, Infowars, were worth $135 million to $270 million.

This week’s trial was the first of three to determine how much Mr. Jones owes the families for the suffering he has caused, and the size of the award is sure to be contested. Jurors deliberated for about four hours before reaching Friday’s verdict.

Compensatory damages are based on proven harm, loss or injury, and are often calculated based on the fair market value of damaged property, lost wages and expenses, according to Cornell Law School. Punitive damages are intended to punish especially harmful behavior and tend to be granted at the court’s discretion, and are sometimes many multiples of a compensatory award.

The case decided this week was brought by Scarlett Lewis and Neil Heslin, whose 6-year-old son, Jesse Lewis, died in the attack in Newtown, Conn. It was the first to arise from several lawsuits filed by victims’ parents in 2018.

“This is an important day for truth, for justice, and I couldn’t be happier,” Ms. Lewis said in the courtroom after the verdict.

Before the jurors began deliberating about the punitive damages, Wesley Todd Ball, a lawyer for the family, told the jury that it had “the ability to send a message for everyone in this country and perhaps this world to hear.”

“We ask that you send a very, very simple message, and that is: Stop Alex Jones,” he said. “Stop the monetization of misinformation and lies. Please.”

Mr. Ball had asked the jury for punitive damages of about $146 million, in addition to the $4 million in compensatory damages awarded on Thursday.

ImageF. Andino Reynal, left, a lawyer for Mr. Jones, and Wesley Todd Ball, a lawyer for the Sandy Hook family, in court on Friday. Mr. Reynal contended that the punitive award would ultimately be reduced to $1.5 million.Credit…Pool photo by Briana Sanchez

How much Mr. Jones will actually have to pay in punitive damages is certain to be the subject of further litigation. Texas law caps punitive damages at two times the compensatory damages plus $750,000.

But Mark Bankston, a lawyer for Mr. Heslin and Ms. Lewis, told reporters on Thursday that the issue is likely to end up before the Texas Supreme Court, and legal experts said there were disagreements about the constitutionality of the cap.

Understand the Cases Against Alex Jones

A united front. Alex Jones, a far-right conspiracy theorist, is the focus of a long-running legal battle waged by families of victims of a mass shooting at Sandy Hook Elementary School in Newtown, Conn., in 2012. Here is what to know:

Pushing misinformation. Mr. Jones used his Infowars media company to spread lies about Sandy Hook, claiming that the attack in 2012, in which 20 first graders and six educators were killed, was a hoax. The families of the victims say Mr. Jones’s lies have added to their devastation and his followers have harassed them, threatening their safety.

Defamation lawsuits. The families of 10 Sandy Hook victims sued Mr. Jones in four separate lawsuits. The cases never made it to a jury; Mr. Jones was found liable by default in all of them because he refused to turn over documents, including financial records, ordered by the courts over four years of litigation.

Mr. Jones’s line of defense. The Infowars host has claimed that his right to free speech protected him, even though the outcome of the cases was due to the fact that he failed to provide the necessary documents and testify.

Three new trials. A trial in Austin, Texas this July was the first of three that will determine how much Mr. Jones must pay the families of the Sandy Hook victims. The other two are scheduled for September, but are on hold after Mr. Jones put the Infowars parent company, Free Speech Systems, into Chapter 11 bankruptcy last week, halting all pending litigation.

Compensatory and punitive damages. On Aug. 4, a jury in the Texas trial awarded the parents of one of the children killed in the mass shooting more than $4 million in compensatory damages, which are based on proven harm, loss or injury. A day later, jurors decided Mr. Jones must pay the parents $45.2 million in punitive damages, which aim to punish especially harmful behavior and tend to be granted at the court’s discretion.

Mr. Jones believes “the First Amendment is under siege, and he looks forward to continuing the fight,” Mr. Reynal said after the verdict.

After the jury award, Judge Maya Guerra Gamble also cleared the way for another step that could prove problematic for Mr. Jones.

The lawyers for the family had disclosed during the trial that Mr. Jones’s team had sent them, apparently inadvertently, a huge cache of data from Mr. Jones’s cellphone, and on Friday Judge Gamble said she would not stand in the way of the lawyers for Mr. Heslin and Ms. Lewis providing the messages to law enforcement and the House Jan. 6 committee.

The committee has subpoenaed Mr. Jones in its investigation over his role in helping plan the pro-Trump rally in Washington on Jan. 6, 2021, that preceded the attack on the Capitol.

In the Sandy Hook defamation cases, a trial for damages in another of the suits is scheduled to begin next month in Connecticut, but it could be delayed because of a bankruptcy filing last week by Free Speech Systems. Lawyers for the families criticized the move as another attempt by Mr. Jones to shield his wealth and evade judgment.

The Texas case allowed the plaintiffs to introduce testimony about Mr. Jones’s wealth and the operations of his companies, which in addition to carrying his broadcasts make money by selling merchandise.

Bernard Pettingill Jr., a forensic economist and former economics professor at the Florida Institute of Technology, testified as a witness for Mr. Heslin and Ms. Lewis on Friday that Mr. Jones “is a very successful man.”

Infowars averaged $53.2 million in annual revenue between September 2015 and December 2018, Mr. Pettingill said. Since then, there has been a “nice healthy increase” in the company’s revenue, including from sales of survivalist merchandise and supplements, and it brought in nearly $65 million last year, he said.

At one point, Mr. Jones was paying himself an average of $6 million a year, Mr. Pettingill said.

Last year, after Mr. Jones was ruled liable by default in the Sandy Hook cases, he began funneling $11,000 per day into PQPR, Mr. Pettingill said.

The “gigantic” loan from PQPR, a shell company without any employees, is actually Mr. Jones “using that note as a clawback to pay himself back,” Mr. Pettingill said, although Mr. Jones’s lawyer insisted that PQPR is a real company. Another note is set to mature when Mr. Jones is 74 (he is now 48).

Mr. Pettingill said he had managed to track nine private Jones-associated companies, but had to cobble together information in part because Mr. Jones’s team resisted discovery orders.

“We can’t really put a finger on what he does for a living, how he actually makes his money,” he said.

“His organization chart is an inverted T, which means everything flows to Alex Jones. Alex Jones made all the major decisions, and I think Alex Jones knows where the money is,” Mr. Pettingill said. “He can say he’s broke, he has no money, but we know that’s not correct.”

Mr. Jones and associates such as the Genesis Communications Network, which helped syndicate his show for decades, have claimed to be down to the financial wire, using the defamation cases as an opportunity to beg fans for donations.

Mr. Jones has complained that his revenue plunged after he was barred from major social media platforms in 2018. Mr. Bankston pushed back in court on Wednesday: “Well, after your deplatforming, your numbers keep getting better,” he said.

After the verdict on Friday, Ms. Lewis stressed the importance of her having gotten an opportunity during the trial to confront Mr. Jones directly in the courtroom earlier in the week.

“I got to look into his eyes and I got to tell him the impact his actions had on me and my family and not just us — all the other Sandy Hook families, all the people that live in Sandy Hook and then the ripple effect that that had throughout the world,” she said. “That was a cathartic moment for me.”

It was also important, she said, that Mr. Jones saw a video, presented in court, of Jesse alive, running through a field. “I think he’s been punished,” she said of Mr. Jones. “I think he’s been held accountable, and I’m hoping he really takes this to heart because in the end love is a choice, and what he’s putting out there — lies, hatred — that’s a choice, too.”

[Health] What are the heat exhaustion and heatstroke symptoms?

Liz Truss plans could cost £50bn a year, and will ‘fail to help poorest cope’

Learn about your baby with psychic gender reading

How Crypto Is Changing The Gig Economy

Serena Williams gave Vogue the exclusive on her retirement.