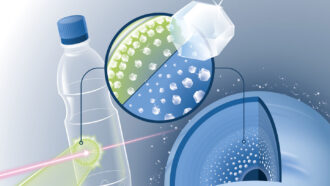 With the zap of a laser, trash can literally become treasure. In a new experiment, physicists shined a laser at bits of PET. That’s the kind of plastic used in soda bottles. The laser blast squeezed the plastic to about a million times Earth’s atmospheric pressure. It also superheated the material. This harsh treatment transformed the plain-old PET into nanosized diamonds.

The new technique could be used to make tiny diamonds for advanced tech based on quantum physics. That’s the branch of science that rules on small scales. Such devices could include new quantum computers or sensors. What’s more, these lab results could offer insight into planetary ice giants, such as Neptune and Uranus. Those planets have similar temperatures, pressures and combinations of chemical elements as seen in this experiment. So, the results suggest that diamonds may rain down inside those planets.

Like other plastics, PET contains carbon. In plastics, that carbon is built into molecules that contain other elements, such as hydrogen. But extreme conditions can coax that carbon into the crystal structure that makes up diamond.

For their new study, researchers trained lasers on samples of PET. Each laser blast sent a shock wave through the material. This amped up the pressure and temperature within it. Probing the plastic afterward with bursts of X-rays showed that nanodiamonds had formed.

The oxygen seems to help diamonds form, says Dominik Kraus. This physicist works at the University of Rostock in Germany. He worked on the new research. “The oxygen sucks out the hydrogen,” he says. This leaves behind carbon to form diamond.

Nanodiamonds are often produced using explosives, Kraus says. That process is not easy to control. But the new laser technique could offer fine control over diamond-making. This could make forging diamonds for specific uses easier.

“The idea is quite cool. You take water bottle plastic; you zap it with a laser to make diamond,” says Marius Millot. He’s a physicist at Lawrence Livermore National Laboratory in California. He was did not taken part in the study.

It’s not clear how easily tiny diamonds could be mined from plastic pieces, Millot says. But, “it’s pretty neat to think about.”