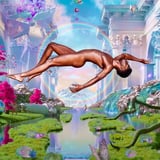 After unveiling the Marvel-themed trailer for Montero in June, Lil Nas X is giving fans even more details about his debut album. The rapper recently announced his album would be dropping on Sept. 17, and now we know the official tracklist. The songs include recent singles like “Industry Baby” and “Montero (Call Me by Your Name)” as well as collaborations with artists like Megan Thee Stallion and Miley Cyrus. The clip also teases a brand-new song, which features lyrics about finding someone to love.

The album is executive produced by Take a Daytrip duo Denzel Baptiste and David Biral, which is a lot to be excited about. “Nas bringing us on to executive produce this album has changed our lives forever,” they wrote on Instagram alongside the trailer. While Lil Nas X has blessed us with a handful of singles, Montero is his debut album and his first major release since the 7 EP in 2019. Check out the trailers for Montero below.