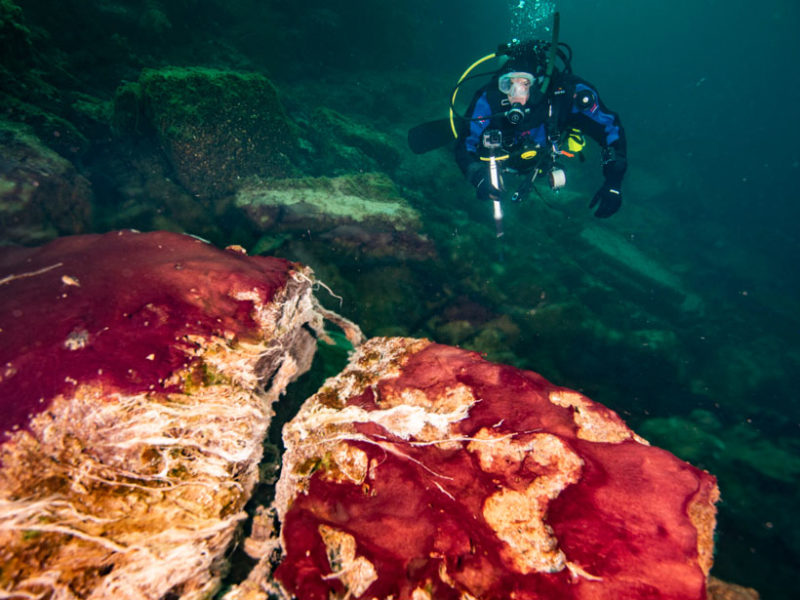 Gregory Dick, a professor of Earth and environmental sciences at the University of Michigan, had just completed a public lecture on a Saturday morning in 2016 when a colleague asked him a question.

Dick and postdoctoral researcher Judith Klatt were studying the role of cyanobacteria in oxygenating Earth’s atmosphere billions of years ago. Klatt, now at the Max Planck Institute for Marine Microbiology, had found that mats of photosynthetic cyanobacteria begin to release oxygen into the water only after a long lag early in the day as they compete with other microbes for sunlight.

Brian Arbic, a Michigan oceanographer who was attending the lecture, asked if the changing length of Earth’s day could have affected photosynthesis and hence the amount of oxygen released into the atmosphere. “I hadn’t ever heard about the changing day length,” recalled Dick. “We got excited about it, and Judith and I started working on the problem.”

“It is clear that photosynthesis is, and always has been, the only significant source of oxygen on our planet. And oxygenic photosynthesis was ‘invented’ by cyanobacteria.”Five years later, Klatt, Arbic, Dick, and colleagues reported their results in Nature Geoscience: The increase in the length of the day could have played a key role in allowing cyanobacterial mats to pump oxygen into the air, setting the stage for the development of complex life.

“One of the most enduring questions in the Earth sciences is how Earth became the oxygen-rich planet that we could evolve on,” said Klatt, the lead author of the study. “It is clear that photosynthesis is, and always has been, the only significant source of oxygen on our planet. And oxygenic photosynthesis was ‘invented’ by cyanobacteria.”

Although fossil records indicate that cyanobacteria first appeared on Earth at least 3.5 billion years ago, atmospheric oxygen didn’t begin to appear until about 2.4 billion years ago. Scientists have wondered why there was such a long lag between the two milestones.

Klatt and her colleagues probed that question through a combination of laboratory experiments and modeling.

For the experiments, they collected samples of bacterial mats from the bottom of Middle Island Sinkhole, a collapsed limestone cave in Lake Huron, about 3 kilometers off the northeastern coast of Michigan’s lower peninsula. Conditions in the sinkhole approximate those of shallow coastal waters all across Earth billions of years ago. Competing layers of microbes jockey for position during the day, with purple oxygen-producing cyanobacteria rising to the top layer during the morning hours.

Similar mats “might have dominated Earth’s coasts for much of its history and were likely the arena for oxygenic photosynthesis,” said Klatt. “Nowadays, we only find microbial mats in ‘extreme’ environments….One such place is the Middle Island Sinkhole.”

“This is one of those rare places that we might call a process analog,” said Woodward Fischer, a professor of geobiology at the California Institute of Technology who wasn’t involved in the research. “They’re not looking at an environment that’s an exact reproduction [of ancient mats], but it’s a place where processes are playing out that remind us of that.”

In Dick’s laboratory, the team exposed the mats to day-night cycles of different lengths, corresponding to the length of Earth’s day at different times in its past. 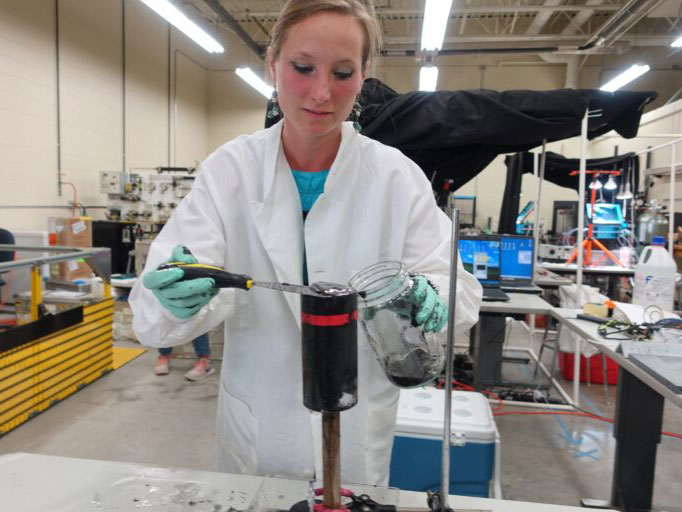 Judith Klatt scrapes a sample of a Middle Island Sinkhole microbial mat from a sediment core into a jar for study. Credit: Jim Erickson, University of Michigan News

Shortly after the formation of the Moon, more than 4 billion years ago, the day was just 6 hours long. Lunar tides, however, function as a brake, slowing Earth’s rotation and making the days longer. (To balance the books, the Moon moves farther from Earth; it’s currently receding at about 3.8 centimeters per year.)

By 2.4 billion years ago—a time that corresponds to the Great Oxidation Event, the first big pulse of oxygen into the atmosphere—the day had extended to about 21 hours. It stayed at that length (perhaps, Arbic said, because of a counteracting thermal atmospheric tide that was unrelated to the lunar tides) for more than a billion years. At the end of that period, the lunar tides regained supremacy, and the day lengthened again, to about 24 hours. That increase corresponds to the second big jump in atmospheric oxygen, the Neoproterozoic Oxygenation Event, about 600 million years ago.

The Length of the Day Matters

With a longer day, more oxygen diffused into the water.The experiments showed that although total oxygen production by the photosynthetic cyanobacteria was about the same regardless of day length, the physics of diffusion limited the amount of oxygen that entered the water for up to several hours after sunrise. Short days left little time for that process to play out—by the time the oxygen factory had shifted into high gear, the Sun was setting, and it was time to shut down for the night. With a longer day, though, more oxygen diffused into the water.

“The total amount of sunlight is the same whether the day is 16 hours long or 24 hours or whatever,” said Arbic. “It’s just that with a shorter day, you turn it off and on more often. Since there’s a lag in the process, that’s why it matters if you have a longer day.”

The researchers then extended their work by developing a general model of mat systems and changing daylight conditions. The model considered the physiology of various mat systems, differing photosynthesis rates, and conditions in the water column, among other factors. “All scenarios showed a dependency of net productivity on day length,” Klatt said.

“The modeling was really exciting because it showed that this mechanism [for producing oxygen] doesn’t have anything to do with the particular behaviors of the organisms in one site versus another or in the modern world versus the ancient world,” said Dick. “We think this is a really robust effect that should operate anywhere you have oxygen being produced in these microbial mats.”

“This is part of the picture, but not the whole picture,” of Earth’s oxygenation history, Fischer said. “This mechanism extends just to mats living on the seafloor, and we don’t have a perfect geological record. But it’s absolutely part of the picture.”