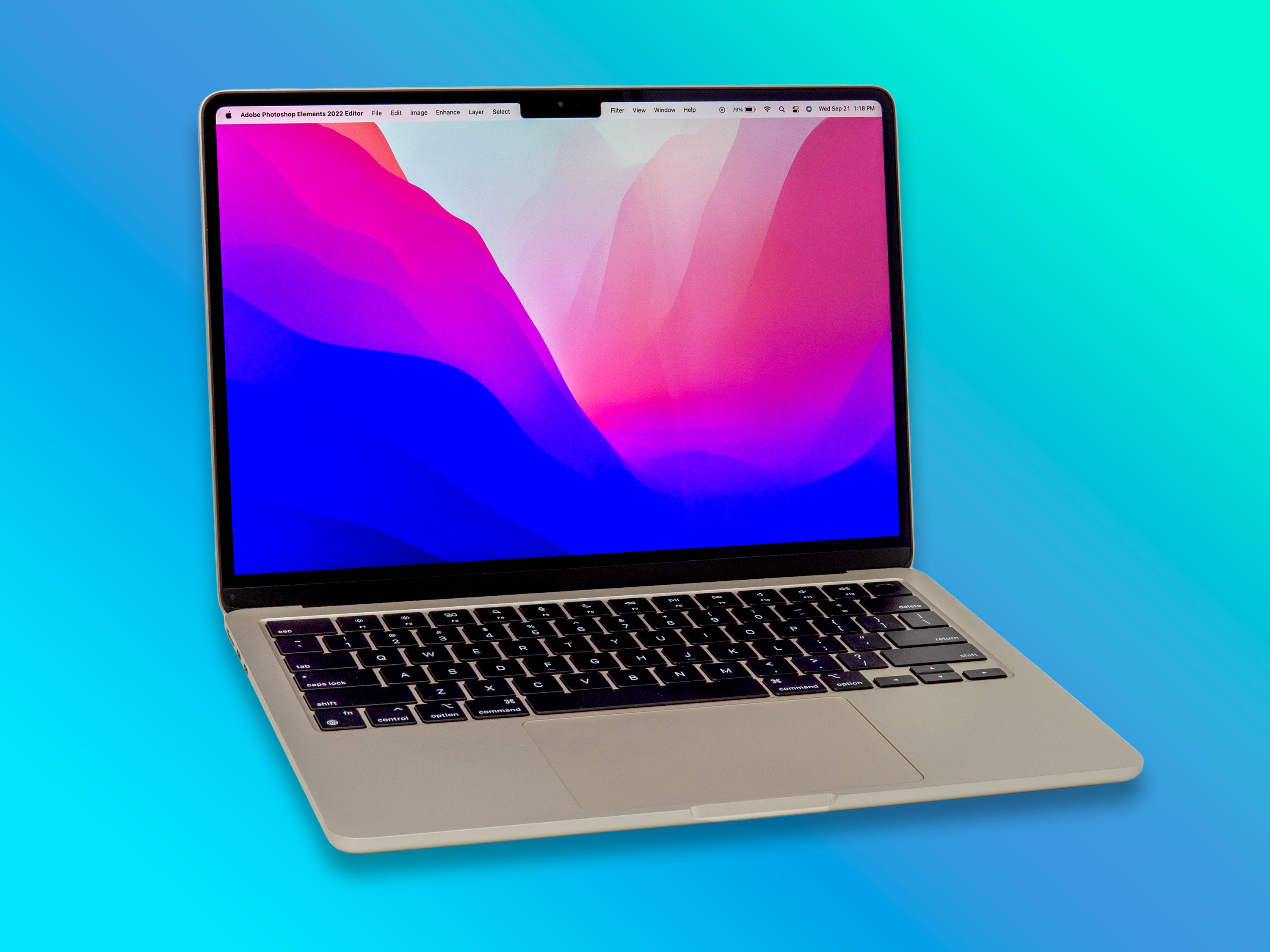 Apple’s latest MacBook Air is one of the most dramatic redesigns to the laptop in over a decade. Gone is the signature wedge shape, replaced by a boxier form factor that resembles the 14 and 16-inch MacBook Pros. As an exemplary entry-level laptop, the MacBook Air has the new M2 chip, a bigger, brighter display, and a thinner, lighter body. Apple even brought back the beloved MagSafe and ditched the infamous Touch Bar.

The MacBook Air has always been popular for being the least expensive Apple laptop, but the new MacBook Air with M2 is changing that: At $1,199, it’s $200 more than MacBook Air’s historical $999 price tag (the M1 MacBook Air is still available at that lower price). Are all these updates worth the extra $200?

The M2 MacBook Air is an end-to-end design refresh 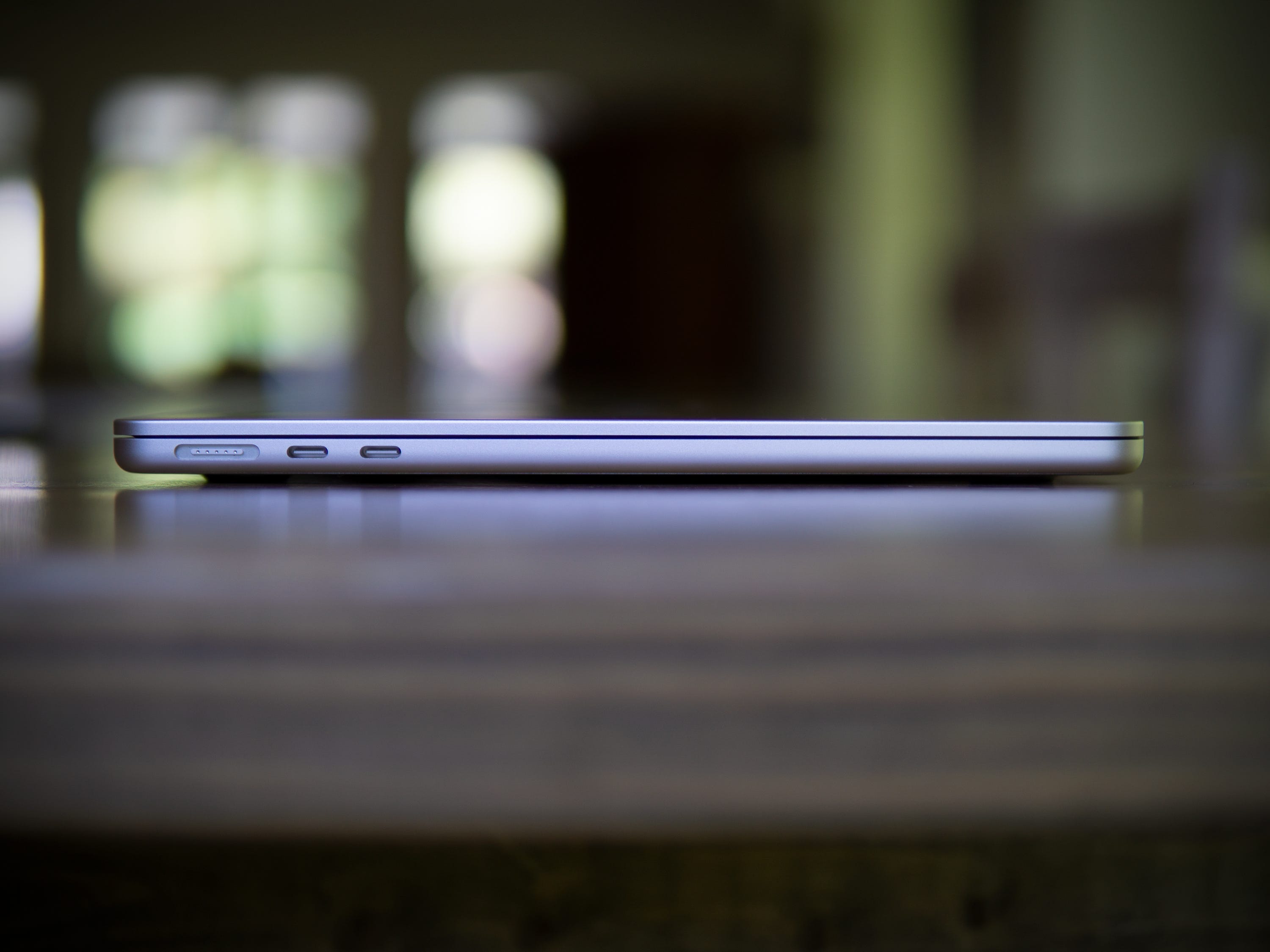 Those who love the old Air’s wedge design may turn their nose to the MacBook Pro-like appearance, but it’s modern and well-measured, and true to its name, it’s still remarkably light and slim.

In lieu of the tapered design, the M2 MacBook Air is technically a fraction thicker than its predecessor by 12 millimeters. But, it’s 0.1 pounds lighter than the M1 model — negligible, but these specs matter when portability is a concern.

The M2 MacBook Air also comes with new color options: Silver, Space Gray, Starlight, and Midnight. Starlight is somewhere between a warm silver and light beige, while the new Midnight is a bluish black. The caveat: Midnight and Starlight are fingerprint magnets, albeit less noticeable in the latter. 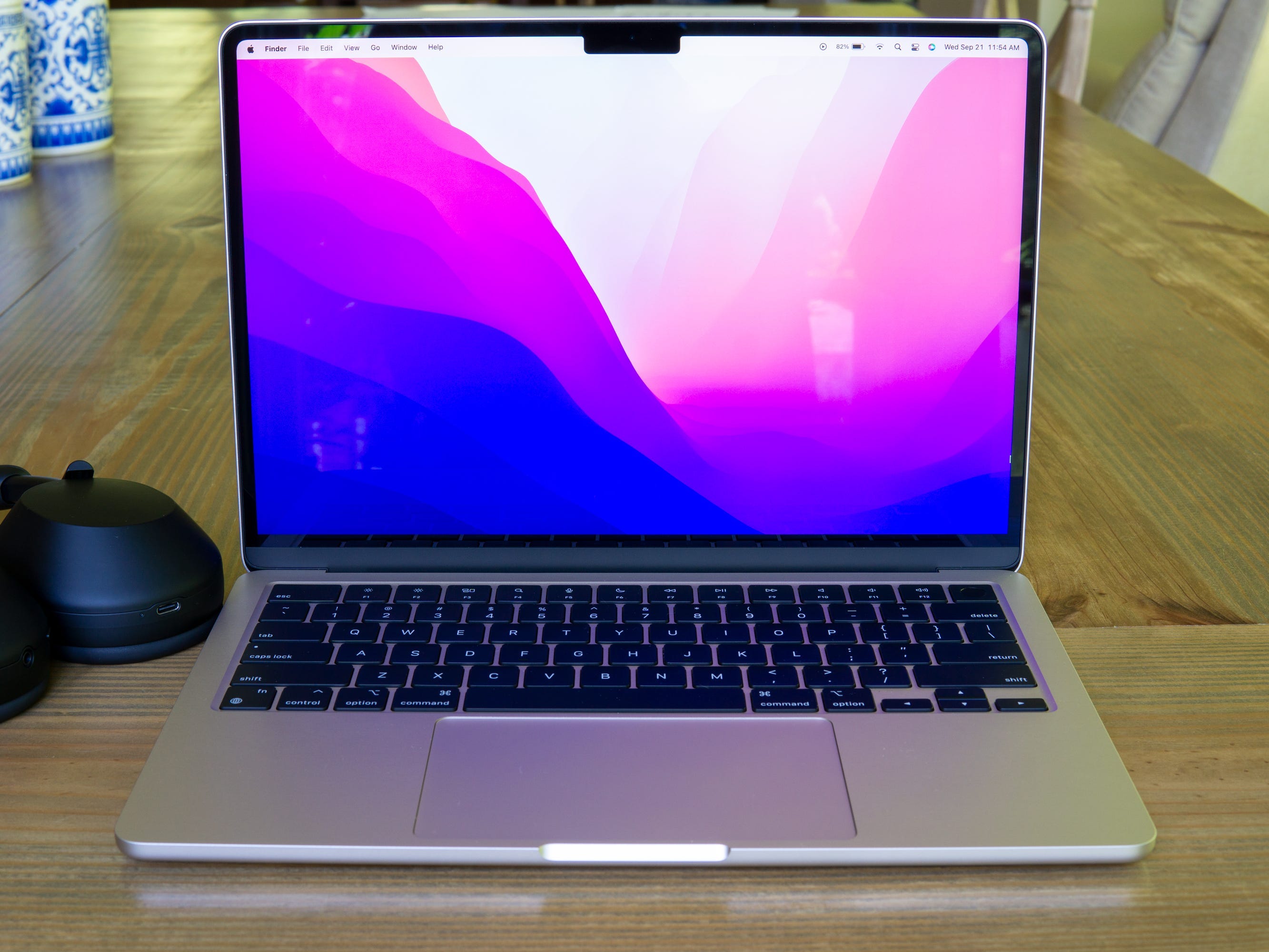 The M2 MacBook Air has a slightly larger screen than previous 13-inch MacBook Airs, which gives your apps more room to breathe.

At 13.6 inches, the M2 MacBook Air’s screen is slightly larger than the 13.3-inch screens of previous MacBook Airs. The thinner bezel also gives the perception of an even larger display.

The extra screen real estate is at the top, and it’s basically a new home for the macOS menu bar. It gives your apps and windows noticeably more room to breathe compared to what you may be accustomed to.

To incorporate the FaceTime camera, Apple added a notch at the center — similar to the iPhone. In this instance, the notch works: The menu bar is on either side of it, and it doesn’t cut into an application (except in full screen mode) like it would on the iPhone.

A better webcam, but Face ID omission is a missed opportunity 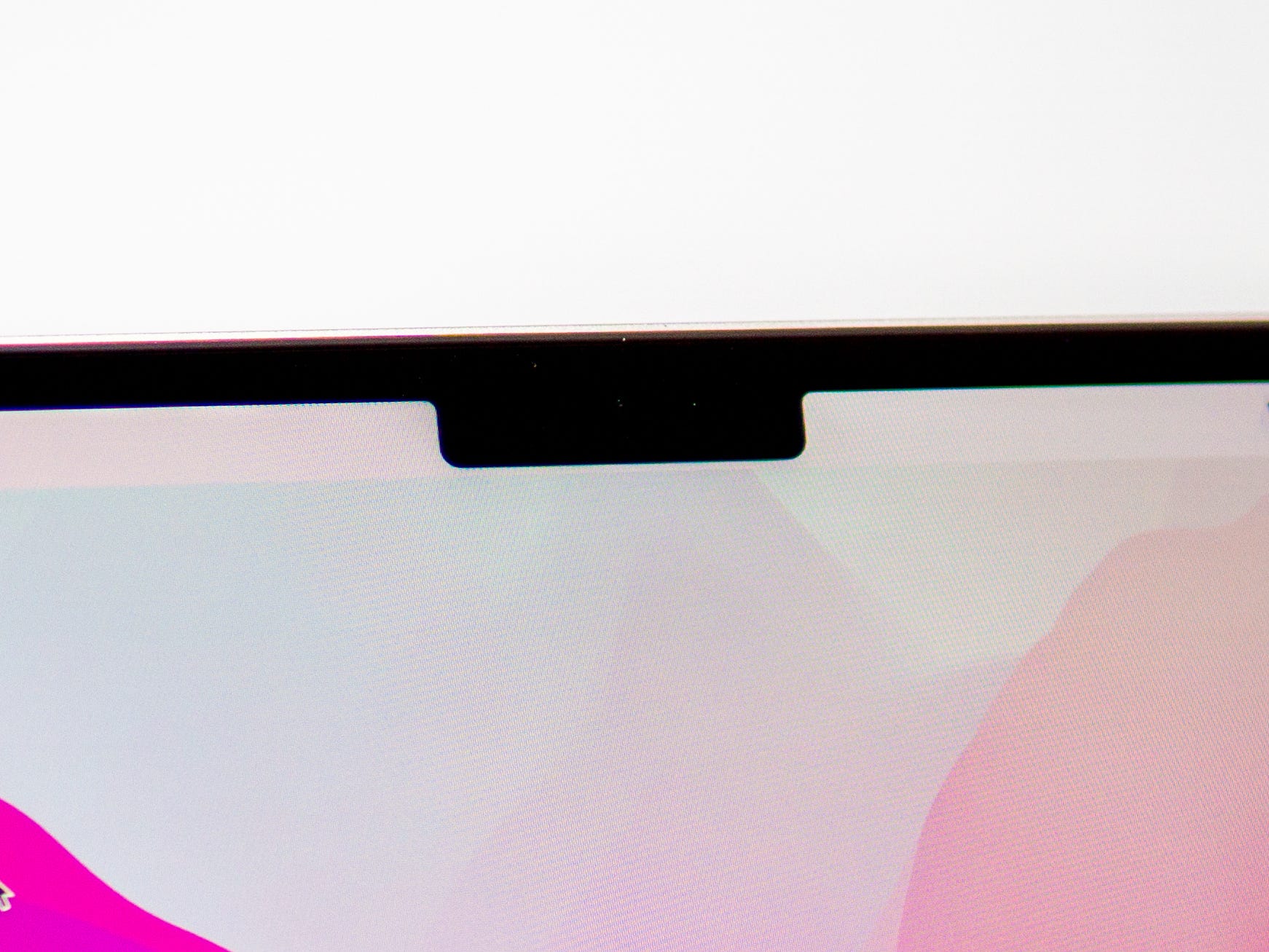 The M2 MacBook Air’s new notch houses the new 1080p webcam, but it feels like it could have included FaceID, too.

The FaceTime camera has been upgraded from 720p to 1080p resolution for sharper video calls. You’ll see an improvement, but don’t expect a dramatic difference.

Apple decided not add Face ID, which seems like a missed opportunity as the notch seems large enough to fit the sensor. Instead, the M2 MacBook Air uses Touch ID for fast unlocking.

Microphone quality is the same as the M1 MacBook Air’s, and it’s sufficient for video calls and voice recordings.

The M2 MacBook Air is so quick, it feels like it predicts your every move 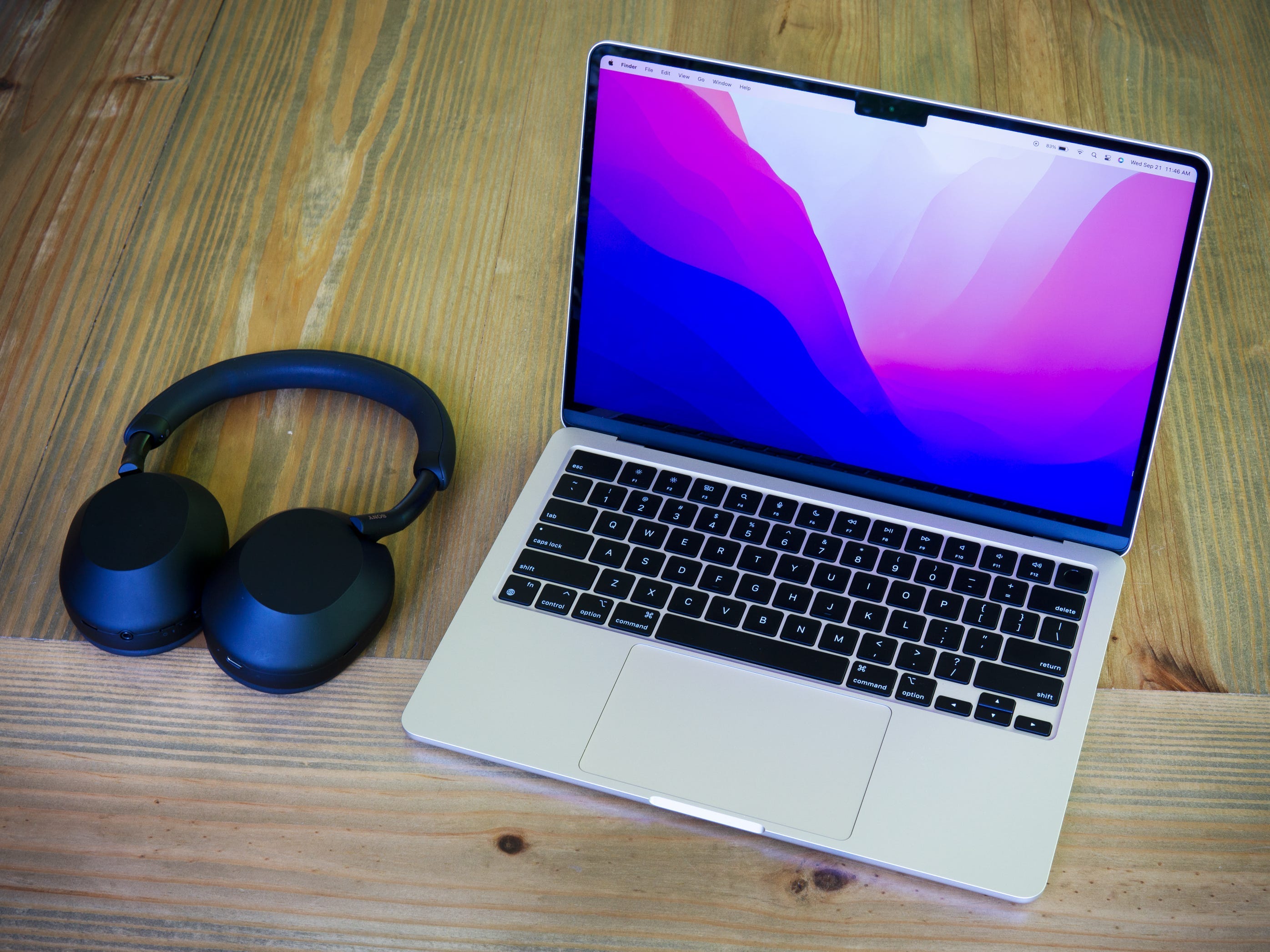 The M2 processor in the 2022 MacBook Air is incredibly quick, but it doesn’t offer a huge performance leap over the M1 processor.

I tested the base M2 MacBook Air with an 8-core CPU, 8-core GPU, and 8GB of memory (RAM). I ran a typical workload that includes 20-plus web browser tabs, some light photo editing, and an array of apps like Messages, Slack, and Apple Music.

Apple’s M2 processor is technically more powerful on paper and in benchmarks compared to the M1 processor, but only by a thin margin. Compared to the M1 MacBook Pro with 16GB RAM I have on hand, the M2 MacBook Air feels about as fast and responsive.

To be clear, that’s to say the M2 MacBook Air, which doesn’t have a fan to cool the processor during extended workloads, works as well as a laptop with a fan and with twice the RAM. It handles my typical workload like a breeze.

This thing just flies — there’s an immediate reaction the nanosecond you click on something. Waiting for apps to load feels like a thing of the past, websites open up nearly instantaneously (on my fast 300Mbps fiber internet connection), and the laptop is ready to start working by the time I finish raising the lid.

Like the M1, the M2 won’t support more than one external monitor. For many people this shouldn’t be an issue, but it’s disappointing for those who need multi-monitor support.

It’s been widely reported by users and tech reviewers that the M2 MacBook Air uses slower chipsets for storage (SSD) in the base 256GB model.

I can confirm that this is the case. However, it would only affect a small number of users who often transfer huge files between their laptop and an incredibly fast external hard drive that supports very high speeds, like those that support Thunderbolt 3-plus or USB-C 3.2 Gen 2×2 standards.

The speakers, keyboard, and trackpad are best in class 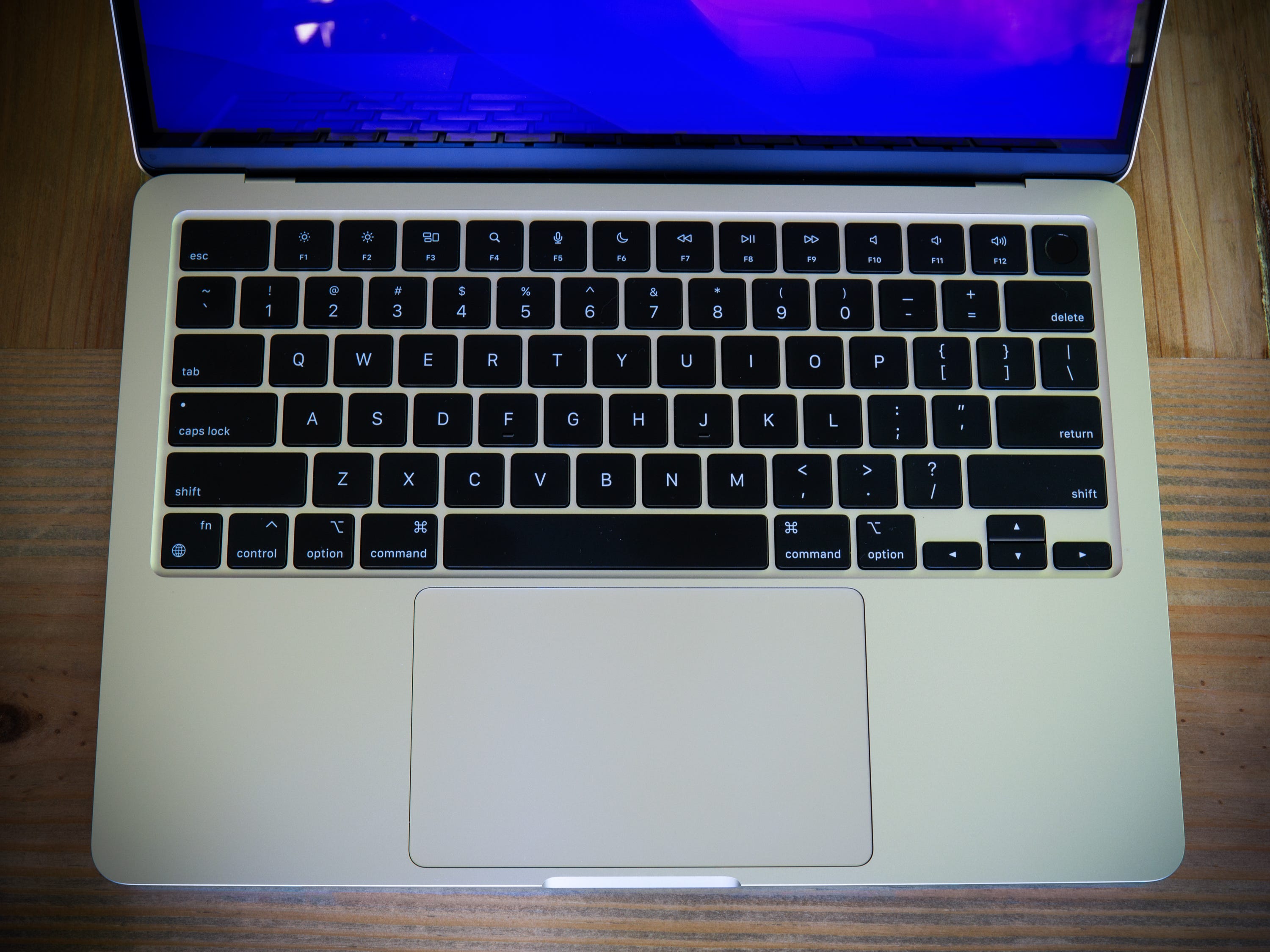 The M2 MacBook Air’s keyboard is a joy to type on.

The M2 MacBook Air’s four speakers provide surprisingly good sound for a laptop, whether you’re watching a video or listening to music. It’s clear that Apple designed the M2 MacBook Air’s built-in audio to be more than a mere convenience.

The keyboard makes typing a joy. The keys don’t require much force to press, but they still offer a satisfying, springy bump upon press and release, which gives you the feedback that the key was properly pressed. And when reach the bottom of a key, it feels slightly padded without feeling mushy or spongy, which makes the M2 MacBook Air a supremely comfortable laptop to type on.

Apple’s Touch Bar above the numbers row is gone. Instead, there’s a row of physical function (F) keys for and shortcuts, like screen brightness, volume, and media controls.

As for the trackpad, Apple’s continue to be the best in the business. Swiping and scrolling feel exceptionally smooth, natural, responsive, and accurate. 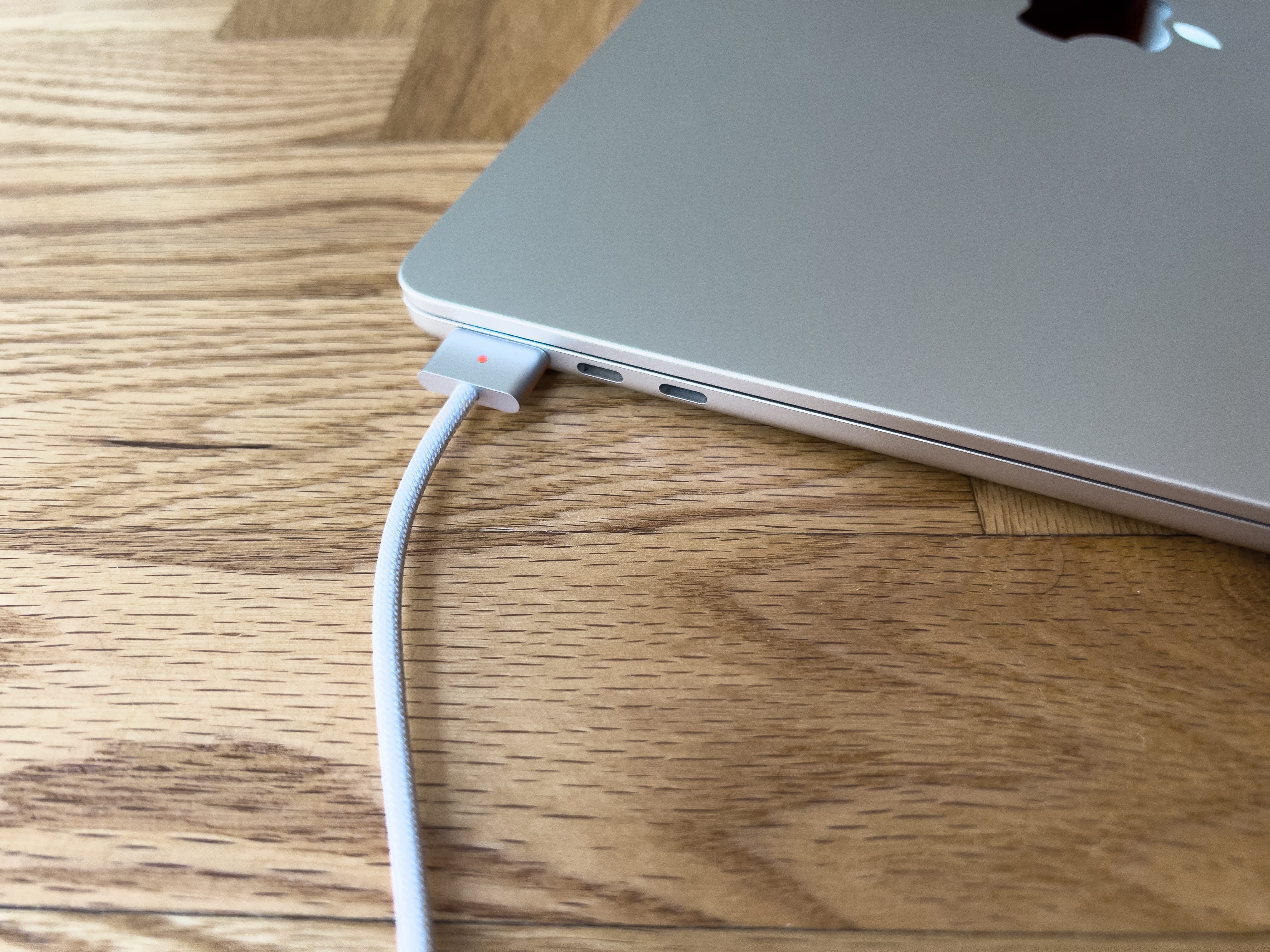 The MagSafe charger makes a nostalgic and triumphant return on the M2 MacBook Air.

In 2016, Apple notoriously ditched MagSafe in favor of USB-C for charging, but the company brought the technology back in 2022. The M2 MacBook Air has a MagSafe charging port alongside two USB-C ports, which can also be used for charging.

I was always a fan of MagSafe on Mac laptops, and I lamented its removal. The magnetic connector prevents damaging the charging port and laptop if you trip over the cable — it simply pulls away from the laptop. Plus, it has that satisfying click sensation when you plug it in.

However, I found myself charging the M2 MacBook Air through USB-C more often, seeing as I already had a setup of USB-C chargers and cables that could support the laptop’s 30W charging speeds. Adding the included MagSafe charging brick to my power strip, or even using an existing charger with the included USB-C-to-MagSafe charging cable, seemed unnecessary and would only add clutter.

The MagSafe and USB-C ports are all on the left side of the laptop, and I get it — it looks sleeker and cleaner to have multiple cables sticking out of one side. But for the sake of functionality and options, I wish Apple placed one of the USB-C ports on the right side.

Battery life is excellent: By the end of the work day, I had 40% battery remaining, even after maxing out the screen’s brightness during the light photo editing of my typical workload.

Apple includes a 30W charger and a USB-C-to-MagSafe 3 cable with the M2 MacBook Air. Older MagSafe and MagSafe 2 chargers are not compatible.

Should you buy the M2 MacBook Air? 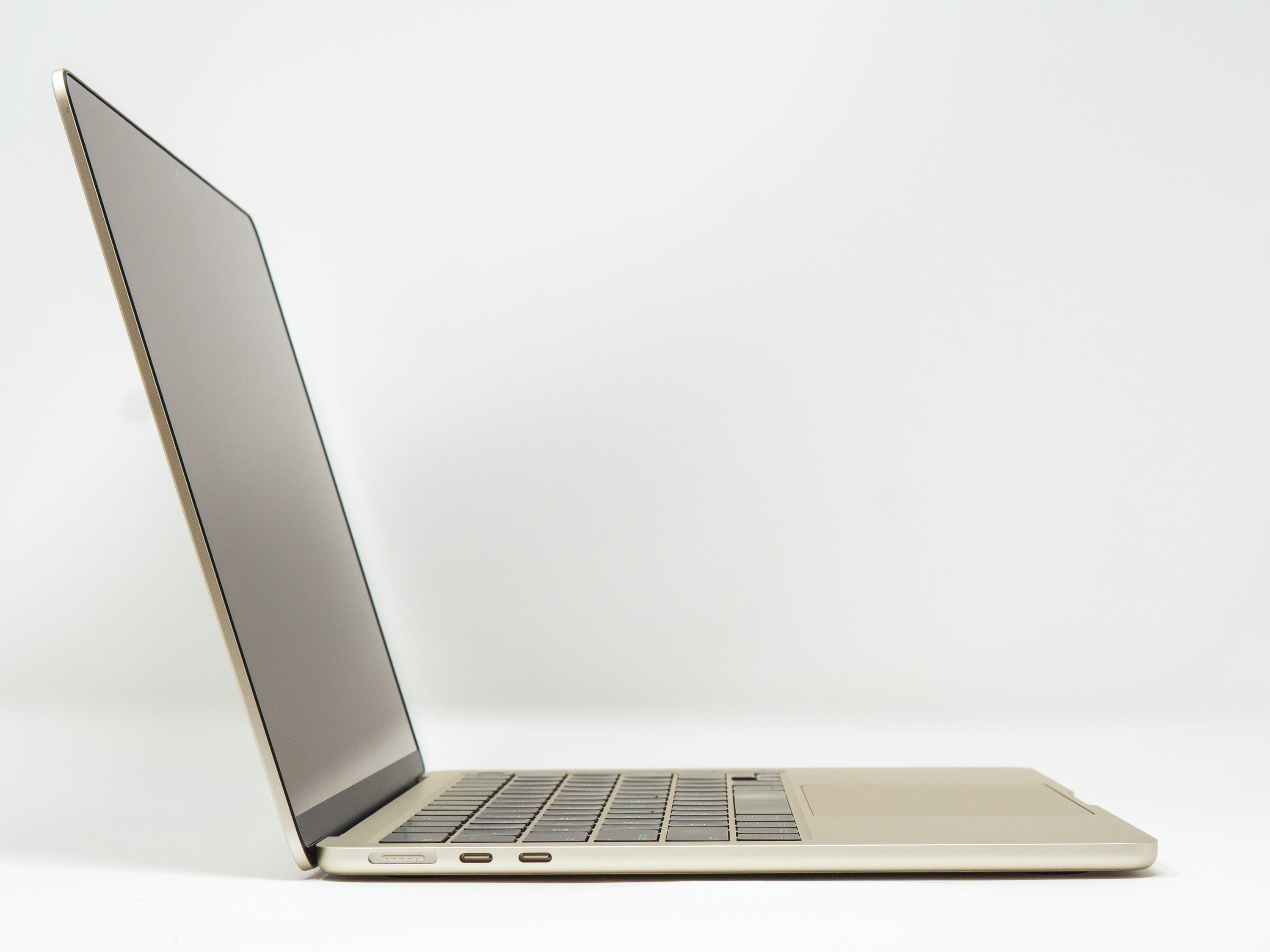 The base 256GB version of the M2 MacBook Air has a slower SSD than the M1 MacBook Air, leading to slower data transfers between the laptop and super-fast external hard drives.

If you’re thinking about buying a new MacBook Air, you’re probably deciding between the M1 and M2 models.

However, the bigger display alone is a good reason to buy the M2 MacBook Air over the M1 model. It truly makes a positive and noticeable difference. And to justify the $200 premium, the M2 processor gives the M2 MacBook Air a longer lifespan on account that it’s newer and technically more powerful.

Regarding the slower SSD in the 256GB M2 MacBook Air, I’m confident the users who would be affected by it won’t be using a base-model MacBook Air for their work. Rather, they should opt for the 512GB model or stick with the speedier 256GB SSD in the M1.