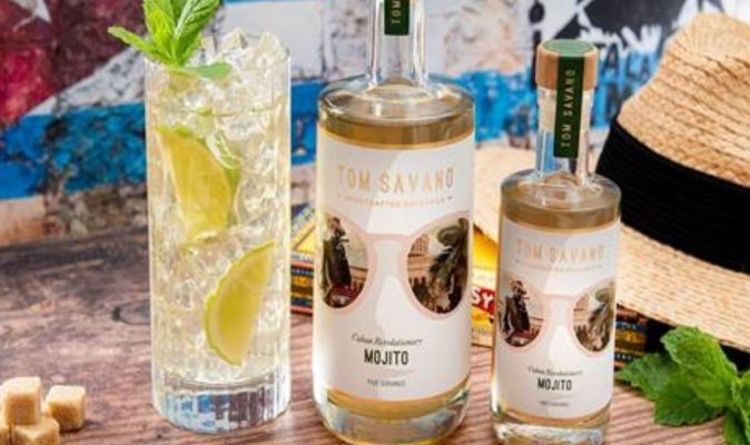 Tom Savano is a luxury RTD cocktail brand, being run by Mr Kerslake as the sole founder while he maintains a full-time day job as a successful city worker: “If I wasn’t so crazy, I think I would have collapsed by now!” Mr Kerslake has had plenty brushes with side hustles and business ventures before, but never quite as lucrative as this six-figure revenue supplementing his original salary.

Mr Kerslake started Tom Savano in August 2018, after being asked by a friend’s sister to make cocktails for her wedding and he was anxious to get stuck into another business venture.

“They loved my drinks more than any they’d had elsewhere. As a serial entrepreneur and being in between side hustles, naturally my brain clicked into gear and thought – well if other people love my cocktails as much as me, is this my next business?

“I was on the hunt for the next project to really commit deeply to, and so I sat down to think it through, to use learnings from my failed start-ups to date to figure out if this idea could be different, doing a brief sketch of how it would work, scale, the financials etc. When I saw the potential on paper, I realised this had to be my focus and that I would do whatever it took to bring this idea to market.”

So he set off to create this new side hustle, all self-funded from his own savings and fully understanding that this would greatly limit the time he had to make it a success.

“It was very stressful watching every pound disappear, but it did make me much more aware of controlling spending. Now we have a collection of angel investors who have put forward a seed round, so we have significantly more capital to grow the business.”

But the success of Tom Savano hasn’t alleviated these worries either: “As we grow, the cash requirements are so much higher – so money disappears at a much faster rate, which is equally – if not more – stressful. You never have enough money as a start-up, with every layer of growth the capital demands increase as well, so you need to keep seeking more funding at every turn.”

He admitted that while he had juggled multiple ventures at once before, this time was different due to the incredible growth of Tom Savano. Yet he doesn’t seem to intend on going full-time with his successful side hustle just yet.

“It’s been extremely difficult to juggle a full-time job, while being a sole founder for a demanding start-up. Almost two years since launch, I am still juggling both – and it gets harder by the day. It would be different if I had some co-founders to share the workload with, or a larger team, but most things still fall on myself to do – so I generally find myself working around the clock, often up until midnight – with barely a few minutes taken here and there for a bite to eat.”

Mr Kerslake has always been an entrepreneur at heart, knowing from the day he left university that a traditional nine-to-five job simply wouldn’t work for him, although his interests never quite focused in just one industry.

“My ventures have ranged from film-making, writing a novel, opening a cafe/food bar in London, building an app for the hospitality industry, as well as toying with some projects in the online dating industry and service gig economy. The longest one was the cafe, which ran for four years, the others being more one-to-two-year ventures. None of them to date have succeeded, but I’ve taken a lot of learning from each one and feel that I’m finally in a position to make this venture a huge success, luck willing!”

Despite having ventured into almost every entrepreneurial field imaginable, Mr Kerslake still had a lot of learning curves in his newfound hustle and credits Facebook with helping him making his brand a well-known statement in the foodie scene.

“Early on I joined a food and drink community called the Food Hub, on Facebook. It is filled with thousands of UK food and drink entrepreneurs at all stages of business growth. I’m now quite notorious on the community as being the guy who posts endless, non-stop questions, but hopefully my questions and the shared knowledge resulting have benefited many other people who have read the posts!”

Mr Kerslake still has big ambitions for Tom Savano, looking to make it a worldwide brand associated with the best cocktail experience imaginable.

“We have made a really solid foundation for Tom Savano as a brand, and I 100 percent still believe in the brand to grow to the scale and ambitions I had for it in the beginning. I want to see Tom Savano earn its reputation as the number one cocktail brand in the world, with a brand association that makes people excited and inspired every time they think of it, or see any of our marketing and branding.”

He advised that budding entrepreneurs require resilience, self-belief, discipline and patience, and ultimately to just go for it no matter what.

“You start with fire and a dream, and all the excitement of imagining where you could go with an idea. But the reality of actually executing and achieving that goal is like a coast-to-coast journey through mud, snow, freezing temperatures, storms, climbing impossibly high mountains, having to turn back and re-do a quarter of your journey when a particular route becomes impossible, having all your food run out, and still having 10,000 miles left to travel.

“Every day is hard, challenging, long, and tests you to the extreme, and there is no guarantee of a sack of gold waiting for you at the end of it. Most of these journeys end without riches, fame or success, and many of the others end with breakeven.

“But for the right personality type, the challenge and journey is why you do it, and it is an incredibly exciting and fulfilling one to take on, but be patient. You won’t achieve anything in the time you originally think it will take, everything takes 10 times longer than it does in your head.

“You can still get to where you want to be, but take each step slowly, build a solid foundation, and learn to walk before you run with the business. Trying to grow businesses fast without a strong foundation is why they often fall over as soon as any pace builds up. And good luck!” he added.

Currently, Tom Savano’s most prominent cocktail is the Cuban Revolutionary Mojito, having been three years in the making, this revival of the classic mojito uses Matusalem platino rum infused with honey, cedar and almond. Designed to give the drinker a memory of a place they’ve never been rather than just a simple cocktail.

The post Man making six figures from his side hustle shares how you can too | Personal Finance | Finance appeared first on Samachar Central.

Search more articles here: Man making six figures from his side hustle shares how you can too |

Read original article here: Man making six figures from his side hustle shares how you can too |