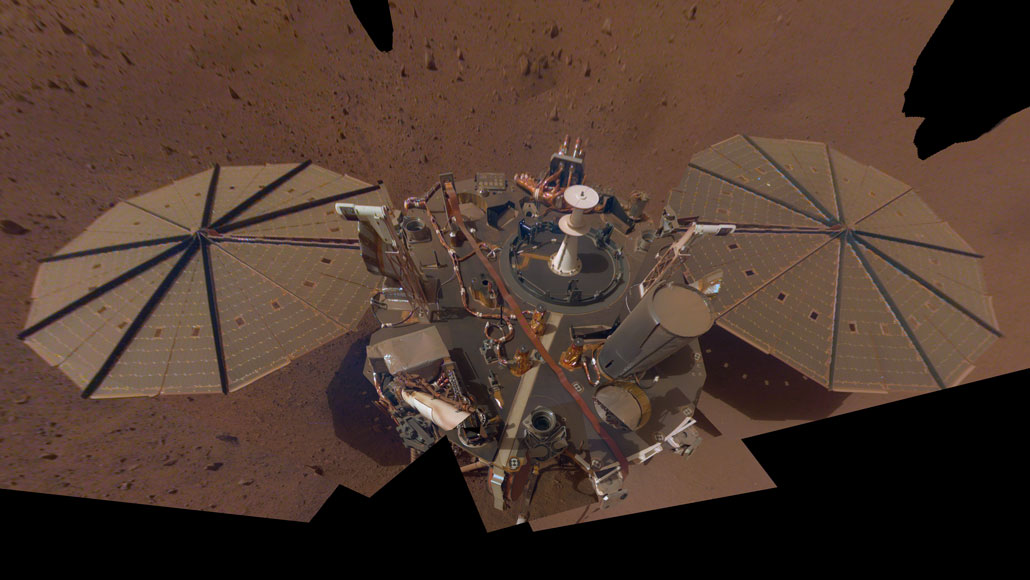 Mars has had its first CT scan, thanks to analyses of seismic waves picked up by NASA’s InSight lander. Diagnosis: The Red Planet’s core is at least partially liquid, as some previous studies had suggested, and is somewhat larger than expected.

InSight reached Mars in late 2018 and soon afterward detected the first known marsquake (SN: 11/26/18; SN: 4/23/19). Since then, the lander’s instruments have picked up more than a thousand temblors, most of them minor rumbles. Many of those quakes originated at a seismically active region more than 1,000 kilometers away from the lander. A small fraction of the quakes had magnitudes ranging from 3.0 to 4.0, and the resulting vibrations have enabled scientists to probe Mars and reveal new clues about its inner structure.

Simon Stähler, a seismologist at ETH Zurich, and colleagues analyzed seismic waves from 11 marsquakes, looking for two types of waves: pressure and shear. Unlike pressure waves, shear waves can’t pass through a liquid, and they move more slowly, traveling side to side through solid materials, rather than in a push-and-pull motion in the same direction a wave is traveling like pressure waves do.

Of those 11 events, six sets of vibrations included shear waves strong enough to stand out from background noise. The strength of those shear waves suggests that they reflected off of the outer surface of a liquid core, rather than entering a solid core and being partially absorbed, Stähler says. And the difference in arrival times at InSight for the pressure waves and shear waves for each quake suggest that Mars’ core is about 3,660 kilometers in diameter, he and colleagues report in the July 23 Science.

That’s a little more than half of the diameter of the entire planet, larger than most previous estimates. The Red Planet’s core is so big, in fact, that it blocks InSight from receiving certain types of seismic waves from a large part of the planet. That, in turn, suggests that Mars may be more seismically active than the lander’s sensors can detect. Indeed, one of the regions in the lander’s seismic blind spot is the Tharsis region, home to some of Mars’ largest volcanoes. Volcanic activity there, as well as the motion of molten rock within the crust in that region, could trigger quakes or seismic waves.

While the newly analyzed data confirm the planet’s outer core is liquid, it’s not clear yet whether Mars has a solid inner core like Earth, says study coauthor Amir Khan, a geophysicist also at ETH Zurich. “The signal should be there in the seismic data,” he says. “We just need to locate it.”

In a separate analysis also published in Science, Khan and colleagues suggest that InSight’s seismic blind spot may also stem, in part, from the way that seismic waves slow down and bend as they travel deep within the planet. Changes in seismic wave speed and direction can result from gradual variations in rock temperature or density, for example.

Mars’ seismic waves also hint at the thickness of the planet’s crust. As they bounce back and forth within the planet, the waves bounce off interfaces between different layers and types of rocks, says Brigitte Knapmeyer-Endrun, a seismologist at the University of Cologne in Bergisch Gladbach, Germany. In a separate study in Science, she and her team analyzed seismic signals that reflected off several such interfaces near Mars’ surface, making it difficult to determine the depth at which the planet’s crust ends and the underlying mantle begins, she says. The researchers concluded, however, that the average thickness of the crust likely lies between 24 and 72 kilometers. For comparison, Earth’s oceanic crust is about 6 to 7 kilometers thick, while the planet’s continental crust averages from 35 to 40 kilometers thick.

Together, these seismic analyses are the first to investigate the innards of a rocky planet other than Earth, Stähler says. As such, they provide “ground truth” for measurements made by spacecraft orbiting Mars, and could help scientists better interpret data gathered from orbit around other planets, such as Mercury and Venus.

The findings could also provide insights that would help planetary scientists better understand how Mars formed and evolved over the life of the solar system, and how the Red Planet ended up so unalike Earth, says Sanne Cottaar, a geophysicist at the University of Cambridge. Cottaar wrote a commentary, also published in Science, on the new research. “Mars was put together with similar building blocks” as Earth, she says, “but had a different result.”