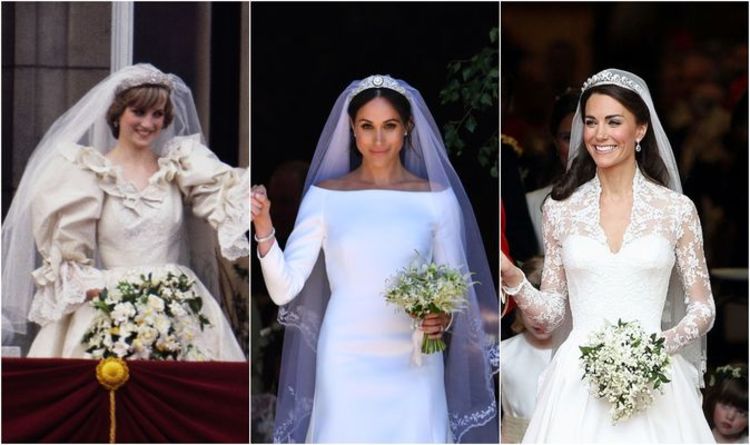 Engagement ring specialists at Steven Stone Jewellers have revealed the 10 most searched for royal family wedding dresses from the 21st century.

From the moment a royal proposal occurs, and an engagement ring is presented, bets are placed on everything from the date of the wedding to the name of the couple’s first child.

The bride’s wedding dress gets the most worldwide attention, often taking the spotlight on the big day, with royal fans desperate to see the style and designer of the gown.

The Duchess of Sussex was the number one spot, with 20,000 average searches a month globally, and 240,000 annually.

This is in comparison to Kate Middleton where the most searches come from the UK.

Meghan Markle got married at St George’s Chapel at Windsor Castle in 2018.

The dress was designed by British designer Clare Waight Keller, the artistic director of Givenchy.

The Duchess of Cambridge tied the knot at Westminster Abbey on 29 April 2011, and her wedding dress gets 14,000 global searches per month, landing in second place.

It was covered in handmade lace created by the Royal School of Needlework. The youngest lace-maker on the team was 19 years old.

Images of roses, thistles, daffodils, and shamrocks were placed on both the bodice and skirt by using a 19th century technique called Carrick-ma-cross, also used on Princess Diana’s dress.

Roses, thistles, daffodils, and shamrocks are the national flowers of England, Scotland, Wales, and Ireland respectively, which was a unifying message from the Duchess on her wedding day.

Princess Diana’s wedding dress is in the top three, with 8,900 average monthly searches – the majority of which comes from America.

The wedding of Prince Charles and Lady Diana Spencer took place on Wednesday 29 July 1981 at St Paul’s Cathedral in London, with 750 million people tuning in.

It remains an iconic garment in royal wedding dress history as well as encapsulating wedding dresses from the 1980s, 40 years later.

Diana’s bodice featured a piece of lace that once belonged to Queen Mary, wife of King George V.

The dress encompassed early 1980s fashion with its large, puffed sleeves trimmed with bows and deep ruffles of taffeta.

It had a 25-foot train and a 153-yard veil, featuring bows, taffeta, petticoats and exaggerated shoulders.

This dress is now on display at a new exhibition, Royal Style in the Making at Kensington Palace.

The Royal family said: “During several fittings the dress was developed layer by layer, constructing it from the corset and the complex underskirt to the fitted bodice and full pleated skirt.

“The dress features a neckline that folds around the shoulders to a low back that drapes into a flowing full-length train.

“The low back feature on the dress was at the specific request of Princess Eugenie who had surgery aged 12 to correct scoliosis.”

The dress also features similar symbols to the Duchess of Cambridge’s dress, including a Thistle for Scotland, a Shamrock for Ireland, the York Rose to pay homage to her father the Duke of York, and ivy to represent the new couple’s home.

Princess Eugenie also wore the Greville Emerald Kokoshnik tiara, which was lent to her by the Queen for the special day.

With weddings finally back in full swing after COVID restrictions lifting, thousands of brides-to-be across the world will look for wedding dress inspiration from the Royal Family.

Denial of responsibility! Samachar Central is an automatic aggregator of the all world’s media. In each content, the hyperlink to the primary source is specified. All trademarks belong to their rightful owners, all materials to their authors. If you are the owner of the content and do not want us to publish your materials, please contact us by email – [email protected]. The content will be deleted within 24 hours.