Missing Out on the Overwatch 2 Beta? Watch Overwatch League Next Week

It’s here. It’s finally, really here. We now have our hands on the Overwatch 2 beta, just over 900 days since the sequel to the hero-based team first-person shooter was announced. It’s been a long wait for those of us who have been begging for substantial new content — there have been no new heroes released in the past two years, and balance updates have been few and far between.

But the Overwatch 2 beta is here to breathe life back into the franchise. And Blizzard is still offering ways to get access to the beta.

The game was first announced at 2019’s BlizzCon, but news about the game has been hard to come by. Granted, since then, there’s been a pandemic and a major lawsuit about workplace culture, not to mention Microsoft buying Activision Blizzard. But past and current fans have been ravenous for more glimpses of the upcoming sequel.

Here’s everything you need to know about the Overwatch 2 beta.

How do I get the Overwatch 2 PVP beta?

You may have already earned access to the beta by opting into the beta selection process on the official Overwatch website. If you were selected, you should get an email from Blizzard with instructions on how to access the beta. Overwatch developers have said that they will release access in waves, so you might still gain access this way later.

If you weren’t selected, don’t panic — you still have other chances to get into the Overwatch 2. For the opening weekend of the Overwatch League, Blizzard is giving away beta tokens for people who watch at least 1 hour of select games:

Overwatch League (more commonly called OWL) matches stream on YouTube, and you’ll need to link your Blizzard account to your YouTube account to be eligible. Blizzard is giving away 1,500 beta tokens every hour, but you have to watch on a computer, on the YouTube mobile app or on YouTube’s mobile website.

You can also email Blizzard to enter yourself for beta access. You’ll be put into the same pool as people watching the Overwatch League. To enter, send an email with the subject “OWL Beta Sweepstakes Entry” to [email protected] and include:

If you miss out on this round, look out for future beta tests.

When is the Overwatch 2 beta release date?

The beta opened at 11 a.m. PT on Tuesday, April 26, and runs through Tuesday, May 17. Blizzard will be granting access throughout the beta, so if you don’t get in on Day 1, keep an eye on your email over the next few weeks — you might get access later.

First, you’ll need a copy of Overwatch to access the beta. If you don’t already have one, Blizzard has said that players invited to the beta will be able to download a free trial of Overwatch. From there, you’re just a few steps away from downloading the beta:

2. In the bottom left, click the Game Version drop-down.

4. When the download is complete, hit the blue Play button to start. 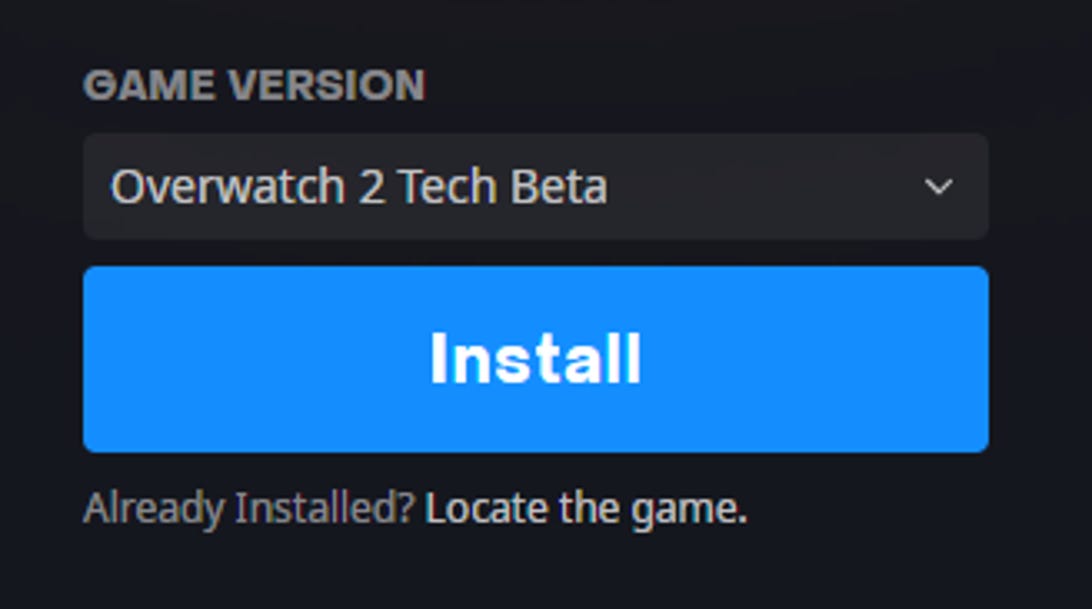 If you were selected for the beta, you can change the game version to Overwatch 2 Tech Beta and download the game.

Is the Overwatch 2 beta PC-only?

Sorry, console players: The first Overwatch 2 beta is exclusive to PC. However, Blizzard has said future betas will include consoles.

What’s in the Overwatch 2 beta?

The beta is our first chance to check out the new 5v5 gameplay, featuring one tank, two damage heroes and two supports. It’s also the debut of Sojourn, the new railgun-wielding damage hero and Overwatch’s first Black female character. Players will get to try out the new Push game mode on the maps Rome and Toronto, and new payload maps like Circuit Royale and Midtown.

In addition to new content, the Overwatch 2 beta will show off reworks of older Overwatch heroes. For instance, Sombra gets new hack and EMP mechanics, Orisa trades in her deployable shield for a javelin, and Doomfist gets moved from the damage category into tank.

What’s notably not in the beta for Overwatch 2: assault maps. The much-maligned game mode has been removed from the sequel. Sayonara, Hanamura.

PS1 Games on PS5, PS4 Have a CRT Filter and Much More

How to watch AMD, Nvidia, and Microsoft’s Computex 2022 keynotes

On Asia trip, Biden says would be willing to use force to…

Biden says US willing to respond ‘militarily’ in…

ABBA hopes to go one better than Elvis and Michael Jackson…