nazi sympathizer insurrectionist who said january 6 was 'exhilarating' gets 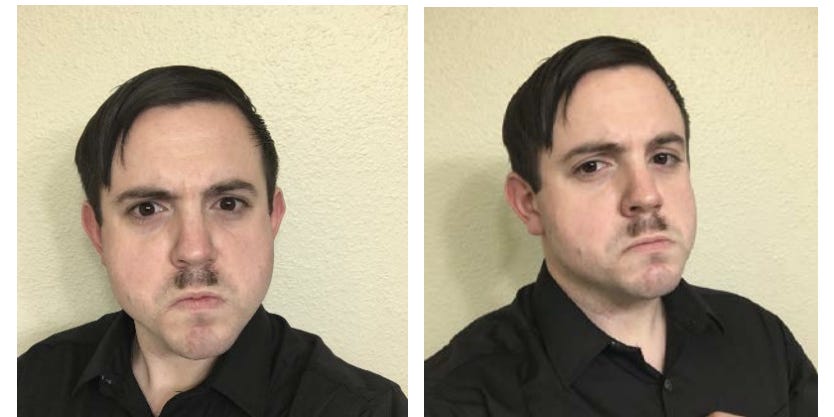 Images of Timothy Hale-Cusanelli, 30, sporting a Hitler mustache. These images were recovered from his cellphone by NCIS special agents.

US Department of Justice

A former Army reservist, described by federal prosecutors as a Nazi sympathizer, was sentenced to four years in prison on Thursday for his role in the January 6 Capitol riot.

A jury in May found Timothy Hale-Cusanelli, 32, guilty of five counts related to the siege, including a felony charge of obstructing an official proceeding. In addition to four years behind bars, Hale-Cusanelli was also sentenced to three years of supervised release and a $2,000 fine.

US District Judge Trevor McFadden this week said Hale-Cusanelli’s sentence was “significant,” admonishing the New Jersey man for lying during his trial, when he claimed he didn’t know that Congress met in the Capitol, despite telling his roommate that he stood outside House chambers during the attack.

McFadden also castigated Hale-Cusanelli, saying he believed that the defendant’s antisemitic, racist, and sexist beliefs, in part, led Hale-Cusanelli to the Capitol on January 6.

Photos of Hale-Cusanelli sporting a Hitler-style mustache emerged following the riot, and an Insider investigation in March 2021 found that he liked to impersonate Adolph Hitler around his workplace at a Naval weapons station, espousing antisemitic remarks that left his colleagues intimidated.

Video from the insurrection shows Hale-Cusanelli encouraging the mob of Trump supporters to “advance” before he joined the crowd in illegally entering the Capitol.

Following the siege, Hale-Cusanelli described the experience as “exhilarating” and said he was “hoping for a civil war,” according to prosecutors.

In court on Thursday, Hale-Cusanelli asked the judge for mercy, saying he had “disrespected” his uniform.

A lawyer for Hale-Cusanelli did not immediately respond to Insider’s request for comment.

At least 919 people have been arrested in connection to the siege and nearly 400 people have pleaded guilty.

When you buy through our links, Insider may earn an affiliate commission. Learn more. Brad …