NHL News: The Carolina Hurricanes Sign Andrei Svechnikov To An 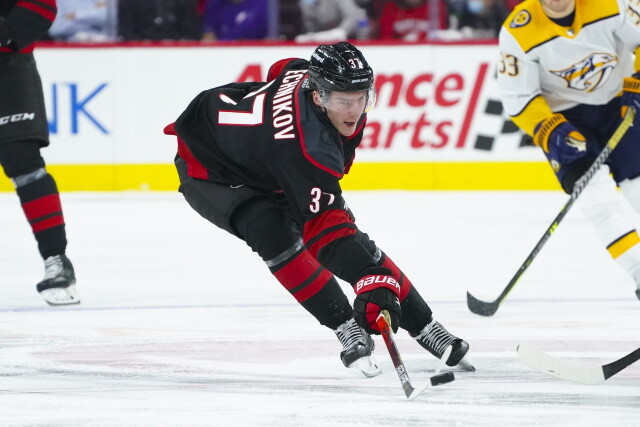 The Carolina Hurricanes have signed forward Andrei Svechnikov to an eight-year contract extension with a $7.75 million salary cap hit.

For the last four years of the contract, he has a 10-team trade list.

Chip Alexander: Hurricanes GM Don Waddell on the Svechnikov contract: “From day we’ve always been talking about a long-term deal. We were both on the same page of finding the right number for eight years.”

Chip Alexander: Hurricanes coach Rod Brind’Amour on the Svechnikov extension: “I think it’s important because we want to keep guys around here that obviously are great players but identify as great Hurricanes. Since day one, he’s checked those boxes. He’s done everything we’ve asked of him.”

Thoughts from the media

Nick Alberga: “Getting Sebastian Aho & Andrei Svechnikov for a combined $16.2M per season is absolute larceny.”

Michael Smith: “Svech re-signing was inevitable, but the big question was what the contract would look like. Forget a bridge. Go straight to max term. Really like this deal. The #Canes lock in their dynamic forward for the long haul at a great rate.”

Chip Alexander: “Canes have Andrei Svechnikov wrapped up long term and at a good price. It’s up to him to earn it.”

Cory Lavalette: “The total value of Svechnikov’s contract is the biggest in team history. Jordan Staal’s was $60M over 10 years, Eric Staal’s was $57.75M over seven years. Svechnikov will make $62 million over the course of his deal.”

Dom Luszczyszyn: “That Svechnikov extension is going to be the new gold standard for “what do you mean he’s signed for X more years at that cap hit?!” otherwise known as the David Pastrnak”

Andrei Svechnikov, signed 8x$7.75M, is an offensive top six winger who creates scoring chances better than almost anybody but struggles to finish his chances. Takes a lot of penalties as well. Interesting player. #LetsGoCanes pic.twitter.com/dBMkNtmy0T

Andrei Svechnikov is a superstar in the making. $7.75M AAV will be a ‘value contract’ in 2 or 3 years when Svechnikov is putting up 80+ points a year. https://t.co/03naJUeX0F pic.twitter.com/LjDNi4YzRB