Nick Bosa returns, and other observations from Day 18 of 49ers 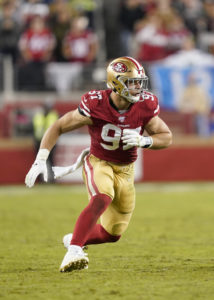 Here is what stood out during the 49ers 18th practice of training camp.

Kyle Shanahan began moving the quarterbacks in and out to simulate what it will be like when Trey Lance comes in for certain plays and packages. This resulted in both quarterbacks taking reps with the first and second units. From the sidelines, the transition appeared to be seamless.

Jimmy Garoppolo: 11-16. Garoppolo was on the money early in practice, hitting on his first five throws before leading George Kittle too far on an out. Of Garoppolo’s three incompletions during the early team session, two of them would have been sacks in a game. More on this later.

Garoppolo was on time throughout practice and had a number of nice throws. His best play of the day came during a move the ball period. On the play, Garoppolo hit Kittle over the middle for a gain of 22 yards. Kittle had plenty of room to run after the catch, but in practice they spot the ball where it is caught.

Trey Lance: 12-17, interception. Lance had a pretty good day himself, hitting on seven of his first nine attempts during the early team session. His last throw of the period would sail over the head of MyCole Pruitt who was running an in breaking route, and safety Ha Ha Clinton-Dix was able to intercept the throw. This was just the latest example of Lance struggling to keep the ball down on throws over the middle.

As he did in the game on Sunday, Lance would rebound from his mistake by completing five of his seven attempts during the late team period. The highlight was a completion to Trent Sherfield on a deep out down the right sideline while on the move.

Bosa took his first live reps during training camp and looked like he hasn’t been away at all. After getting stopped by Trent Williams on his first attempt during one-on-one drills, Bosa would beat Mike McGlinchey around the edge to win his next rep.

Bosa also took eight snaps during team drills, beating Williams for a sack of  Garoppolo on the first passing play that he faced. He looks ready to go.

Just like Nick Bosa, Ford made his presence felt during the team drills. Ford would beat Williams for one sack before registering two against McGlinchey. Ford had McGlinchey so concerned that the right tackle would commit a false start trying to get a jump to counter his speed.

The rookie returned to practice after missing some time with an abductor strain. He looked good and appeared to take snaps away from JaMycal Hasty.

The starting right guard has struggled in pass protection during training camp and today was no different. During one-on-one drills, Brunskill was beat on all four of his reps. The lack of progress by Aaron Banks has caused this to be the weakest position along the offensive line.

Tartt was removed from the Physically Unable to Perform list and was a full participant in practice. Shanahan said that there is a chance for Tartt to play on Sunday, depending on how Tartt looks in practices this week. So far so good.

Hurd returned to practice for the first time since before the Kansas City game and made his presence felt in both the run and pass game. Having played both running back and wide receiver in college, Hurd has a unique skillset that Shanahan would like to take advantage of if Hurd stays healthy.

Jack Hammer is a lifelong 49ers fan who shares insights on the team, and leads discussion on all football and team topics. Follow Jack on Twitter @JackHammer_NFL and subscribe to his YouTube Channel, YouTube.com/c/JackHammer49.