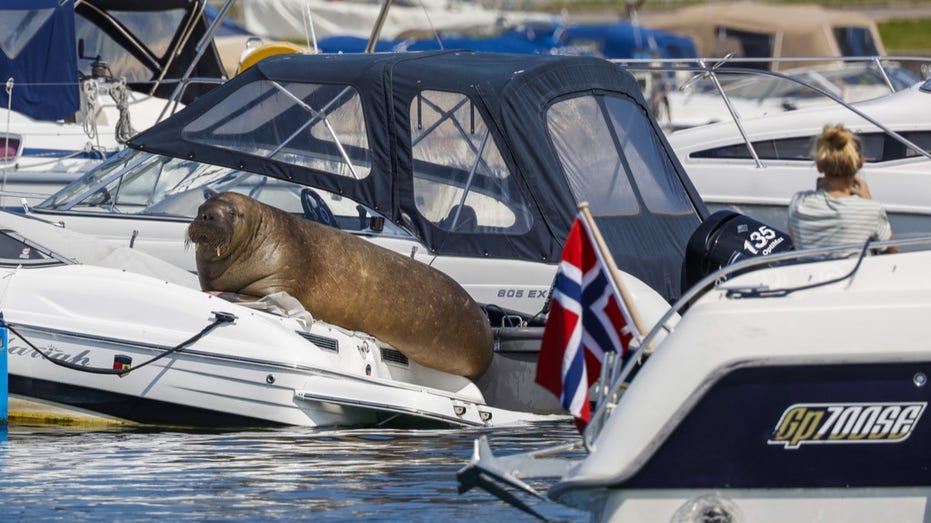 A beloved walrus was put down on Sunday morning after Norwegian authorities determined that she posed a risk to humans.

Freya was a 1,320-pound walrus who became a popular attraction in the Oslo Fjord. She was first spotted in Oslo waters on July 17 – an unusual sighting since walruses usually live in the Arctic Ocean.

Freya was so popular that people often approached her for pictures – despite appeals from authorities for humans keep a safe distance from her.

The 1,320-pound beauty – who was named after the Norse goddess of love – gained notoriety for clambering on small boats, causing damage to them.

WALRUS SPOTTED FOR THE FIRST TIME EVER IN IRELAND

As recently as July, officials said they hoped Freya would leave of her own accord and that euthanasia would be a last resort. When reporting the euthanasia, Norwegian officials referenced the public’s unwillingness to keep away from the marine mammal.

FRENCH WOMAN ATTACKED BY POLAR BEAR IN NORWAY, ESCAPES WITH ONLY MINOR INJURIES

“Through on-site observations the past week, it was made clear that the public has disregarded the current recommendation to keep a clear distance to the walrus,” a statement from Norway’s Directorate of Fisheries said.

“Therefore, the Directorate has concluded, the possibility for potential harm to people was high and animal welfare was not being maintained,” the statement continued.

Frank Bakke-Jensen, head of the Directorate of Fisheries, said he was sympathetic regarding the “reaction from the public,” but stood by the decision.

“We have great regard for animal welfare, but human life and safety must take precedence,” Bakke-Jensen said.

It is rare for Arctic walruses to travel southward towards Europe through the North and Baltic Seas. Another walrus, nicknamed Wally, was seen last year on beaches and even a lifeboat dock in Wales and elsewhere.

Euro solar industry on course to support more than 500,000 jobs this year