not even gumbo is safe from climate change

Not Even Gumbo Is Safe From Climate Change

It was Christmas Day, and like every year before it, I was in little Ville Platte, Louisiana (pop. 7,430). It was a dreadfully warm 80 degrees, the winter air so thick that the concrete was sweating along with me.

I was in town to visit my grandparents, who have lived in Ville Platte their entire lives. I opened the door to their house and smelled the popcorn-like scent of my uncle preparing a roux. He throws in oysters, crawfish tails, crab meat, shrimp and enough salt to stop your heart to make our family’s version of Louisiana’s signature dish, gumbo.

Gumbo marks the passage of time in Louisiana in a serious way. Every Louisianian I’ve spoken to knows what I mean if I say “gumbo weather.” In my mind, it’s a Saturday in November. The air is a little crisp, and it’s finally time to put on that LSU fleece jacket and head to the Parade Grounds for a tailgate. There, my neighbor’s dad will be serving gumbo from a pot half the size of a bathtub.

But gumbo weather is coming later and later, and though I’m a climate scientist, I’m not the only one who notices. Two years ago, my mom and I were complaining about another unseasonably warm Christmas when she said, “I think it used to get colder earlier. Your grandpa would wear thick wool coats to LSU games, even in September.”

The data shows my mom is right, and there’s a lesson there about how global warming is changing the way we live. It’s not just the summers that are getting hotter — the most severe warming on Earth is occurring during winter. Climate projections show that gumbo weather could become a thing of the past. 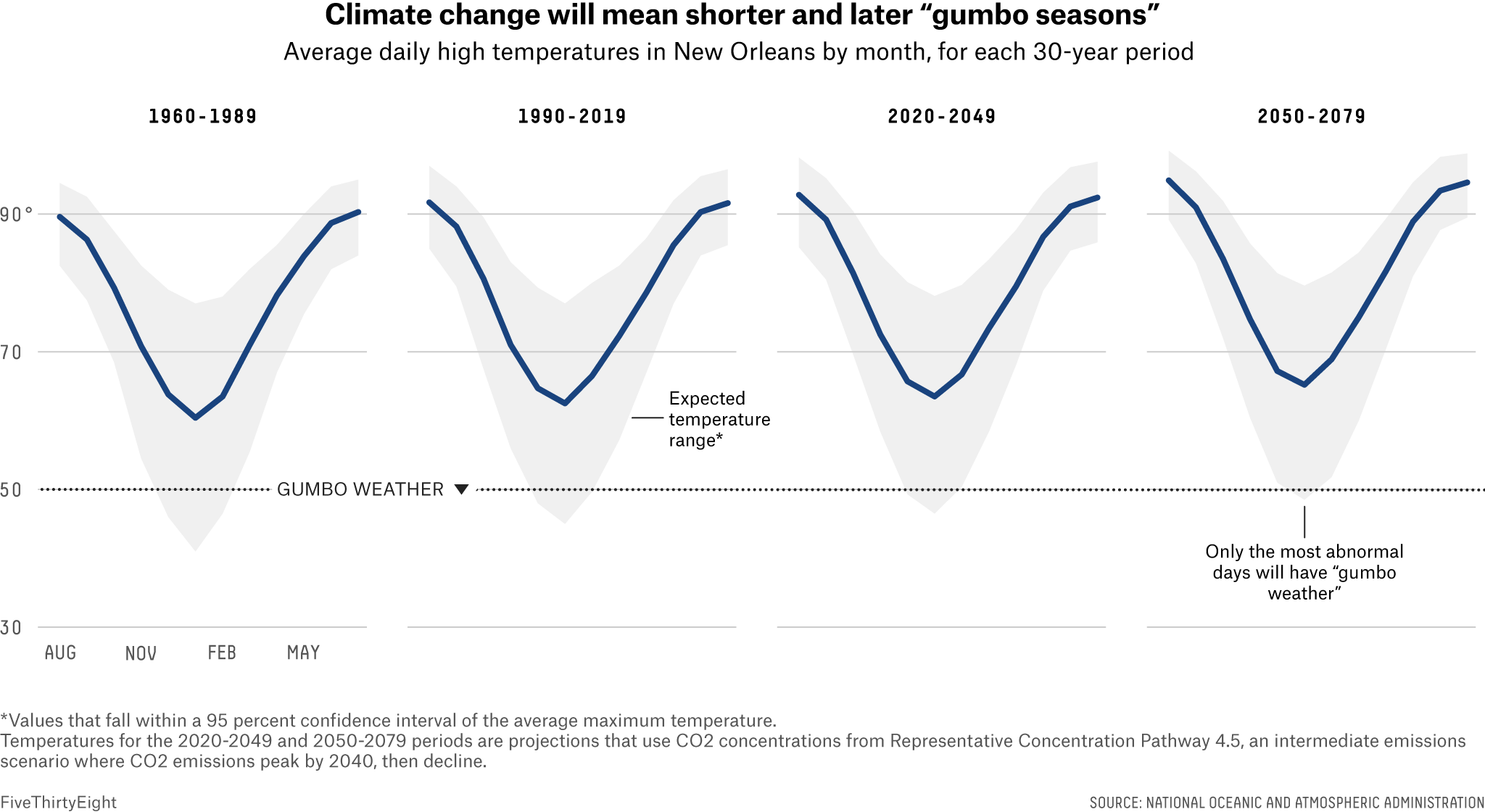 The most severe warming today is concentrated at higher latitudes of the Northern Hemisphere since there’s so much land sitting up there. We hear a lot about oceans getting warmer — and they certainly are — but Earth’s land is warming nearly twice as fast. The enhanced winter warming comes as a result of a positive feedback between warmer temperatures and snowmelt. Because it’s white, snow has a high albedo, which means it reflects a lot of heat from the sun back into space. But warmer days, amped up by human CO2 emissions, are shrinking the snowpack. Consequently, the Earth soaks up all of that sunlight which the snow used to reflect, accelerating warming. Even though Louisiana doesn’t get much snow, the general circulation of the atmosphere means the state experiences all the higher-latitude warming. Temperatures in humid places rise more easily in the summer than in the winter because warm air can hold exponentially more moisture, and that moisture resists temperature change, much like the ocean. The result is more months of 90-to-100 degree weather and shorter, warmer winters.

We can see how that looks by transforming our climate data, looking for how likely a day with highs in the 40s will be in New Orleans. Gumbo weather today is 40 percent less common than it was in my grandfather’s era, and it will soon be even rarer: By 2050, there will be a projected 25 percent fewer potential gumbo days — that is, days with a high below 50 degrees — than in the late 20th century.

Last Christmas, the high was 80 degrees in Ville Platte. For as long as we’ve had records, approximately 130 years, the Christmas high in nearby Baton Rouge has exceeded that only four times. In 2021, the entire United States had its warmest December on record. Climate projections show that from 2050 to 2079, the chances of an 80-degree in New Orleans could be as high as 10 percent.

We most often hear about the more apocalyptic facets of climate change: drought, starvation, migration, wildfires, flooding, killer storms. Louisiana has a story like that. My home state is on the verge of being swallowed by rising seas. But still, because of the way climate and culture are inexorably linked, I feel wistful thinking about gumbo weather and all of the other small deaths we will have to grieve.

COVID Vaccines For Babies: What To Know

Monkeypox Has Evolved at an ‘Accelerated’ And Unexpected Rate, Study Finds

Robots that can check your blood pressure — ScienceDaily

A lot of Arctic infrastructure is threatened by rising temperatures