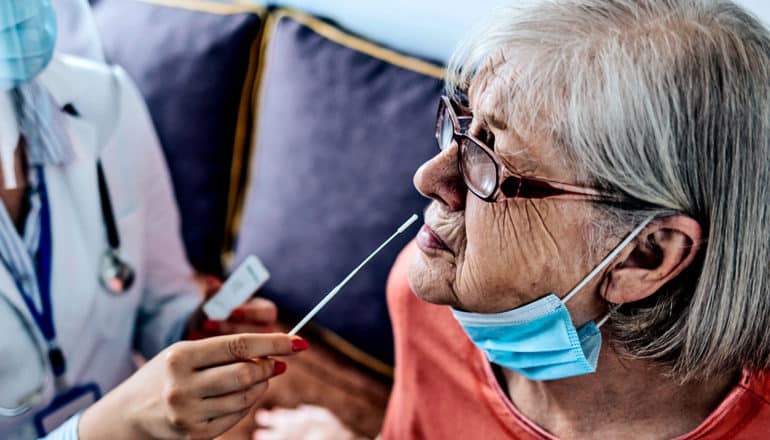 New research sheds light on why COVID-19 has hit nursing homes so hard.

Residents in long-term care facilities had a significantly higher rate of reinfection than people in the general population, according to a new study.

The study in the journal The Lancet Regional Health–Americas analyzed nine months of testing data, just prior to the roll-out of vaccines in long-term care facilities, a period that allowed researchers to look at test results in the setting of natural exposure to the virus.

They identified that 2.6% of residents in Connecticut’s 212 nursing homes had one or more repeat positive SARS-CoV-2 PCR tests occurring as early as 90 days after an initial positive test. This percentage was significantly higher than other demographics, such as younger adults, or community-dwelling elderly.

Even more concerning, 12.6% of the elderly with a second positive test after 90 days died shortly after that repeat positive test. While genetic sequencing was not available, several lines of evidence supported that re-infection may have been responsible for the repeat positive tests, including the fact that 80% of those elderly had an intervening negative test.

“While nursing home residents represent some of the most elderly and frail individuals in our community, we were still quite surprised at the patterns of test results and the outcomes. This was an early clue as to the less robust and waning immunity that may be seen in this vulnerable population following natural SARS-CoV-2 infection,” says Sunil Parikh, associate professor at the Yale University School of Public Health and the study’s lead author.

A critical tool to contain outbreaks in nursing homes has been the use of surveillance testing for the SARS-CoV-2 virus. While tests were hard to come by in the early months of the pandemic, states such as Connecticut were able to conduct rapid and frequent comprehensive testing of nursing home residents by mid-May 2020. The sheer number of positive tests was sobering, but this allowed nursing homes, in collaboration with the Connecticut Department of Public Health (CT DPH) and the Yale School of Public Health to identify outbreaks, analyze data, and separate individuals who were infected, thereby limiting these potentially explosive outbreaks.

It soon became clear, however, that the interpretation of tests was becoming complicated in such settings, as many individuals remained positive for extended periods of time, while some became positive again weeks or months after an initial infection. To help guide the community, the Centers for Disease Control and Prevention provided guidelines suggesting that repeat testing was generally not warranted in the 90 days following initial positive test results.

As the frequency of repeat positive tests began to increase months into the pandemic, questions began to accumulate. Were these residents being re-infected so soon after an initial infection, were these false positive tests, or were these persisting infections?

To understand the landscape of testing results over time, researchers mapped results using the comprehensive surveillance system developed over the early months of the pandemic.

While the study was conducted prior to vaccine roll-out, the potentially short duration of protection following natural infection has implications for nursing homes that are now many months out of initial vaccination efforts. Together with the more transmissible Delta variant, gaps in staff vaccination coverage, and the need for boosters in these settings, this scenario should raise concern about a renewed risk of COVID-19 outbreaks in congregate settings.

Sadly, the fight is not over, and we must remain vigilant in monitoring infection rates in nursing homes and ensuring vaccination of all staff and residents, says coauthor Jillian Armstrong, a doctoral student at CT DPH.