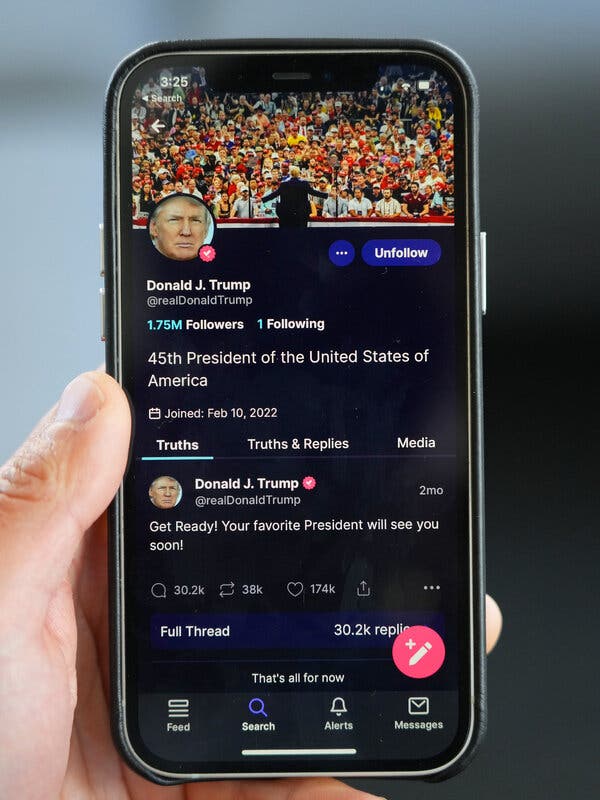 Predictions of imminent civil war and calls for violence surged early this week on social media platforms such as Truth Social, the network started by former President Donald J. Trump, after the F.B.I.’s court-approved search of his Florida home on Monday.

The search, which resulted in the seizure of classified documents, according to a copy of the warrant obtained on Friday by The New York Times, set off an immediate outburst of aggressive and threatening language, akin to the public rhetoric that festered in the days leading up to the Jan. 6, 2021, attack on the Capitol.

Truth Social users posted that the United States was born “through an insurrection followed by several years of bloody violence,” and that the country would “become a communist state just as long as we don’t pick up arms and fight back!!” There was talk that “the tree of liberty must be refreshed from time to time with the blood of patriots and tyrants,” a phrase from a letter by Thomas Jefferson, and that “sometimes clearing out dangerous vermin requires a modicum of violence, unfortunately.”

“No more a nice guy,” one user wrote. “We are at war. Promise you it ain’t gonna be civil,” another wrote. “Lock and Load,” wrote a third.

An account bearing the name of Ricky Shiffer, the man who was killed in Ohio by the police on Thursday, ending a standoff that officials said started after he tried to breach the F.B.I.’s Cincinnati office, had posted messages on Truth Social recommending that “patriots” go to Florida and kill federal agents. On Thursday, the same account also appeared to confess to an attack on the F.B.I.

More Coverage of the F.B.I. Search of Trump’s Home

In a series of recent posts, the account had railed against law enforcement and issued a “call to arms,” saying that for two years, “they have been conditioning us to accept tyranny.” When someone asked whether he was proposing terrorism, the account responded: “I am proposing war.” The Times could not immediately confirm whether the Truth Social account belonged to Mr. Shiffer, 42, of Columbus.

Truth Social’s community guidelines note that its “preference is that the removal of users or user-provided content be kept to the absolute minimum” but say that it will take action in cases where the platform is being “used as a tool for crime or any other unlawful acts.” On a list of reasons to report problematic content, Truth Social includes “content that depicts violence or threat of violence.”

The sentiments on Trump’s social media network extended to other platforms as well. One Proud Boys Telegram channel, used by hundreds of members of the militant group, posted in the hours after the search that “civil war is imminent.” On Twitter, there was a tenfold increase in tweets mentioning “civil war” in the 24 hours after the raid, according to Dataminr, a tool that analyzes Twitter data.

But later in the week, a different narrative gained traction, propelled without evidence by other prominent Truth Social users: that calls for violence were posts planted by federal law enforcement officials or Democratic operatives to frame right-wing patriots as insurrectionists and extremists. The point, the conspiracy theory goes, is to give the Biden administration cover to strip Trump supporters of guns, or to set up a pretext for martial law.

Jack Posobiec, a far-rightator, wrote on Truth Social on Thursday that “ANYONE POSTING ABOUT BEING VIOLENT RIGHT NOW IS A FED.” The news site “Conservative” recommended that people “assume anyone advocating ‘civil war’ or violence of any kind is a plant hoping you will help support the left’s narrative.”

Lara Logan, another right-wingator, posted a video on Friday of an anti-F.B.I. sign twisting in the air to show “Trump 2024 MAGA” on the other side, writing that “they have been trying to incite a civil war for some time.”

In theto her post, someone wrote: “Remember to take the FBI out.”

Will The S&P 500 Head For New Closing Low? You Can Bet On It With This Event Contract

‘The Tsugua Diaries’: A pandemic-era masterpiece

The Covid Collaborators | The Diversity Mire

[Uk] This was history – solemn, spectacular and intense

‘It’s Not Over’: A New History of Trump’s Presidency Is Also a Warning

Putin ‘Choosing Not To End The War But To Expand It:’ Blinken Slams Russian President After Latest Military Order

President Ebrahim Raisi had been scheduled to talk in New York to veteran CNN correspondent, …