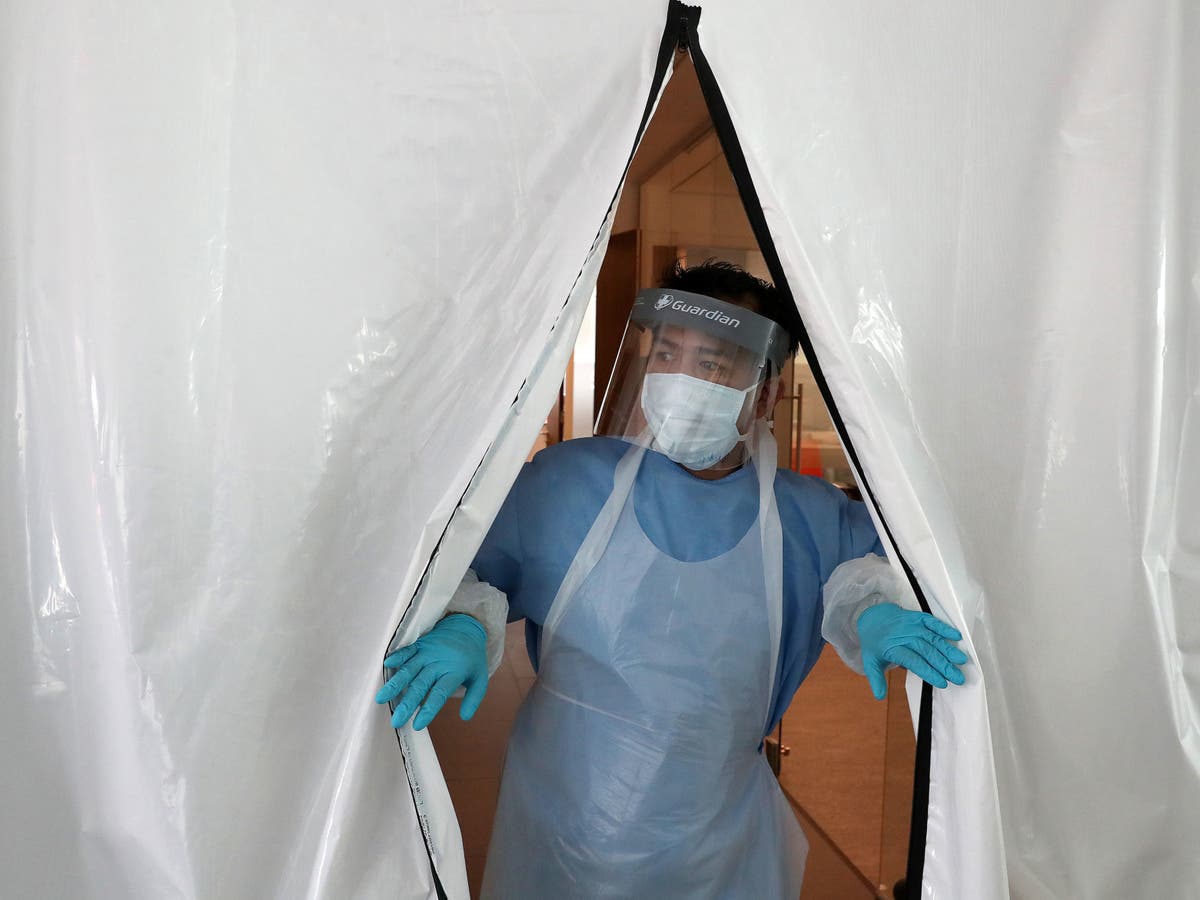 Hundreds of thousands of people suffering from long Covid in England have been unable to access NHS clinics dedicated to treating the condition with patients waiting up to six months for an appointment following a GP referral.

Between 5 July and 1 August just 5,737 referrals were made to the support centres, which were established by the NHS at the beginning of the year to offer a range of treatments and rehabilitative services to those with long-lasting Covid symptoms.

But data from the Office for National Statistics show that an estimated 970,000 people are experiencing long Covid in the UK – more than a third of whom have suffered from the condition for over a year.

This means “only a fraction” of the number of people thought to have the condition are being seen by the clinics, said one member of the NHS Long Covid Taskforce, who asked to remain anonymous.

This is the first time that NHS England has published figures on referrals to the clinics, but they do not cover January to June.

Of the 5,737 referrals made, 708 were deemed “clinically inappropriate” and rejected by the clinics. In a breach of national guidance, campaigners say some clinics have limited their services to people who have been ill for more than 10 weeks, as opposed to four.

“NHS attention is rightly focused on the backlog of business as usual but it needs to review how effective these clinics have actually been,” they added.

A separate survey conducted by the campaign group Long Covid Support (LCS), and shared with The Independent, suggests that patients are typically waiting five to six months for a first appointment after being referred by their GP.

Those who are assessed at an NHS clinic will then wait a further three to six months for a follow-up appointment, with some patients advised that they are likely to have recovered before a second check-up and should not bother booking one, the research says.

The latest ONS estimates suggest that 384,000 people in the UK with long Covid have been suffering from the condition for at least one year, while the LCS survey found that people who first became ill in March 2020 are still awaiting appointments.

Claire Hastie, who founded Long Covid Support, said she suspected “hundreds of thousands of sufferers are not accessing the clinics”.

“I appreciate how hard people are working to put these provisions in place, there’s far too much demand and not enough workforce or money,” she said.

Announcing the creation of new specialist centres for long Covid sufferers in October last year, then NHS chief executive Sir Simon Stevens said the condition could have “a major impact on the lives of a significant minority of patients week or months after they have contracted the virus”.

“So just as the NHS quickly put in place specialist hospital care for acutely ill Covid patients at the start of the pandemic, now we must respond sensitively and effectively to these new patient needs,” he added.

Then health secretary Matt Hancock said: “These additional services will ensure people get the care they need, improve lives and aid in the fight against this global pandemic.”

The LCS survey has been collecting data since early January and has interviewed more than 1,200 people. Its latest edition, which ran between 15 May and 17 August, included 218 respondents, of whom only 30 per cent said they were satisfied with their experience of using the NHS clinics.

Since January, 73 per cent of surveyed patients seeking referral have secured an appointment at a clinic, but only only 46 per cent have had their first appointment.

Ms Hastie said there was variation across the country, with clinics offering face-to-face appointments, virtual meetings or phone calls. The LCS says some patients have never received a physical assessment or health check of any kind.

Others have been discharged from the service following two phone appointments, or recommended for “talking therapy” – despite suffering from symptoms such as severe nausea and fatigue.

“I feel it’s a postcode lottery,” said one patient who has been attempting to access the services in Hounslow, west London.

“Some clinics are virtual, some are part time – a couple of times a week at the end of the week – some are physical places where you go,” said Ms Hastie. “It’s a real mosaic.”

She added that patients may also be bounced back to their GP and then pointed in the direction of a cardiologist, neurologist or physiotherapist to address their symptoms, the outcomes of which are mixed.

Until recently, referred patients in the northwest of England were denied support if their symptoms had not persisted for more than 10 weeks. It’s understood these centres have since been told to accept patients who have been struggling with long Covid for more than a month.

“It was because of capacity troubles in the system,” said Ms Hastie. “As a result, waiting times are large.”

NHS England itself does not provide any data on the amount of time that people are waiting to receive treatment from the clinics, though it’s expected this will soon be provided.

Dr Elaine Maxwell, a scientific adviser at the National Institute for Health Research (NIHR), said the clinics “differ in the way they have been set up, creating significant unwarranted variation in access and in the level of assessment provided.

“We know from advocacy groups that many people are therefore attending and re-attending Emergency Departments and GP practices with their long Covid symptoms, putting further strain on emergency services.”

The NHS said there are 89 long Covid clinics open in England. These are “helping thousands of people with long-term physical, cognitive or psychological issues associated with having had coronavirus, or referring patients onto existing services for further treatment and rehabilitation,” a spokesperson said.

“Anyone who is concerned about long-lasting symptoms should continue to get in touch with their  GP  practice or go online to the NHS ‘Your Covid Recovery’ website to seek further advice.”

The post ‘Only a fraction’ of long Covid sufferers able to access NHS support clinics appeared first on Gamers Grade.