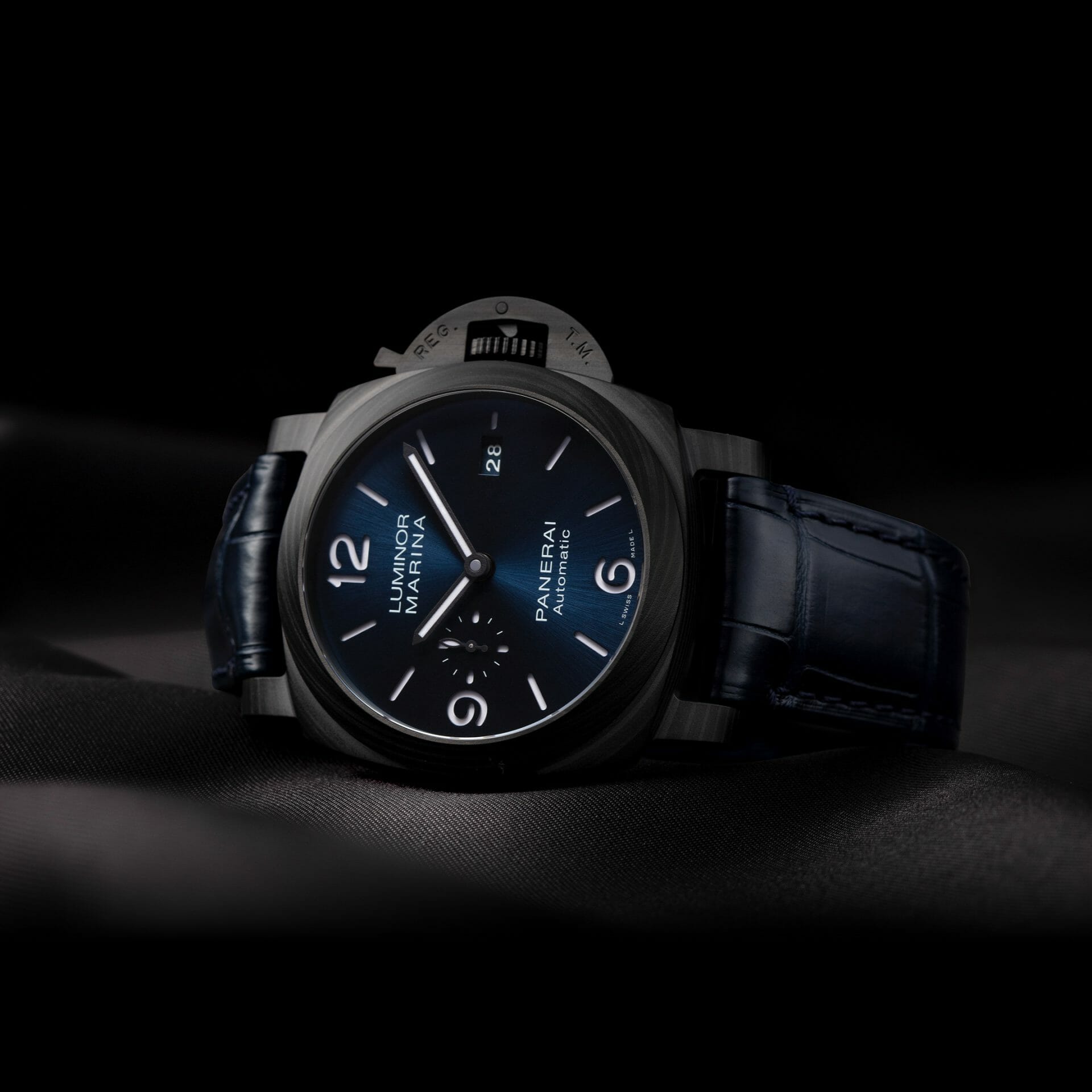 The exclusive Panerai PAM01664 is presented in Carbotech, a brainchild of the Panerai Laboratorio Di Idee’s endless pursuit of cutting-edge technology. The futuristic material — known to be lighter than ceramic or titanium and more resistant to external deformations caused by corrosion and scratches in general — envelops the Panerai PAM01664. Its predominantly matte black coloured case is punctuated with a series of grey waves that is the result of its production process.
— 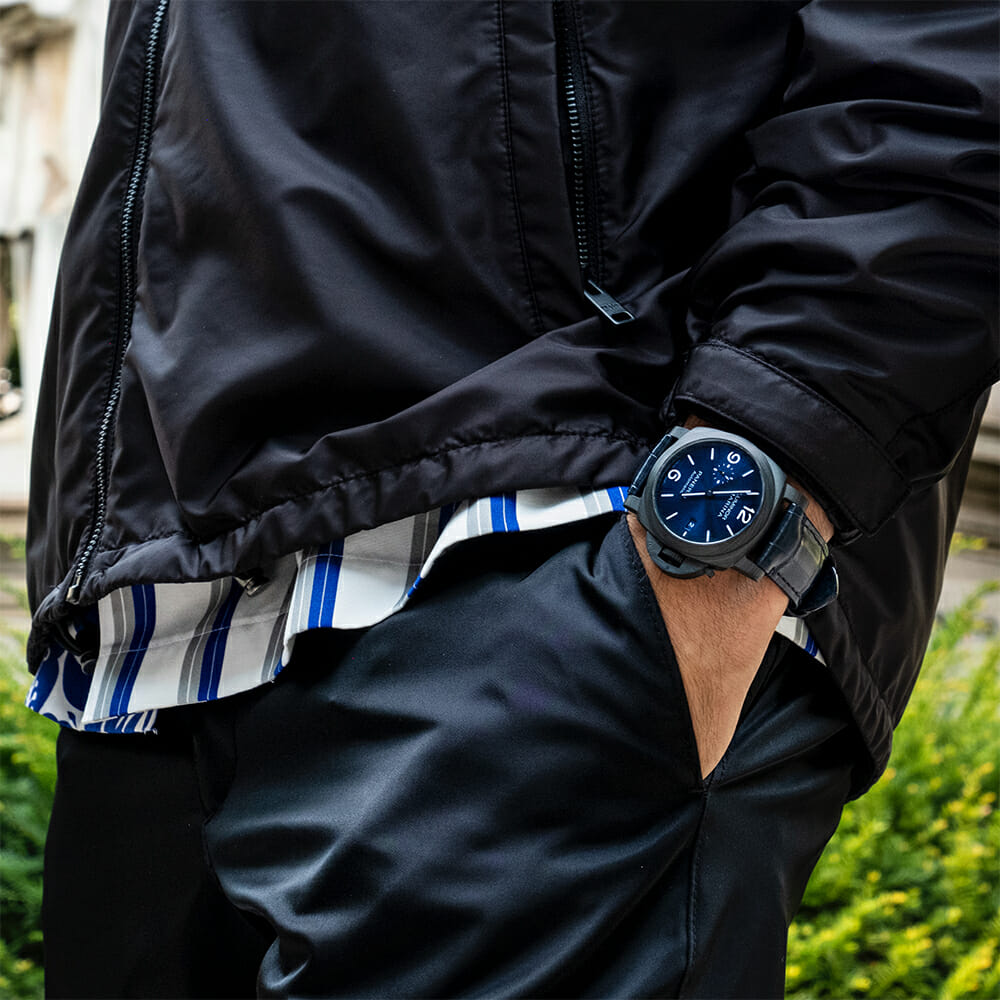 Alternating layers of carbon fibre and PEEK (Polyether ether ketone polymer) are subjected to high temperatures and pressure as both substrates are fused into a composite material block, which are then milled into watch cases. No two resulting Carbotech cases produced are similar as the wave patterns bear slight variations from each other due to the alternate orientation of the raw materials.

Panerai’s choice of a Blu Notte sunburst dial acts as the perfect foil to the Carbotech case. The lustrous shade, which translates into midnight blue, bears similarities to rays of sun filtering through the fathoms of the sea as it glistens between blue and black. Panerai’s famed sandwich dial construction sees the hour indices presented in a contrasting shade of white, matching the hour and minute hands for maximum legibility. Under low-light conditions, the elements glow a bright shade of green as a tribute to the Panerai Luminor namesake that was first coined in the brand’s dictionary in 1949 for the self-luminescent material before being used as an identifier of the Panerai case shape.
— 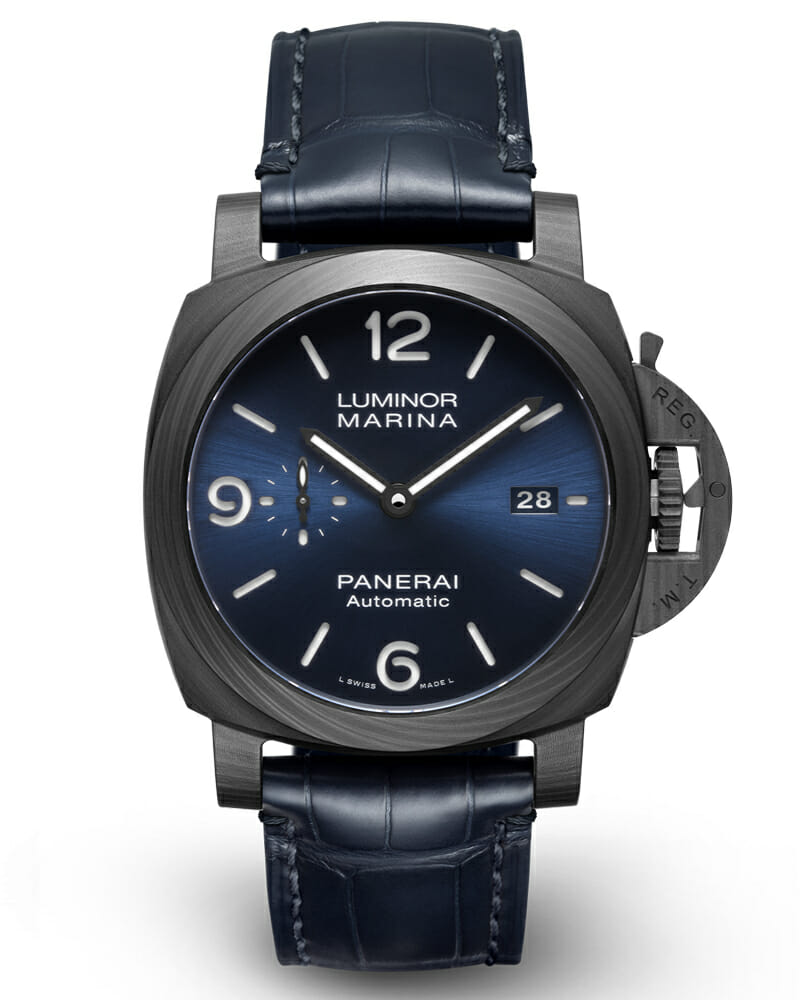 Beneath the azure dial resides the automatic P.9010 calibre built entirely in-house by the Panerai manufacture in Neuchâtel. A three-day power reserve calibre ensures the Panerai PAM01664 remains operational even after a lengthy rest on the dresser over the weekend. Panerai devised a nifty function that allows the hour hand to be adjusted independently in hourly increments without affecting the movement of the minute hand.

Once you’re done with this story about the the Panerai Luminor Marina Carbotech Blu Notte PAM01664, click here to catch up with our September 2021 issue.