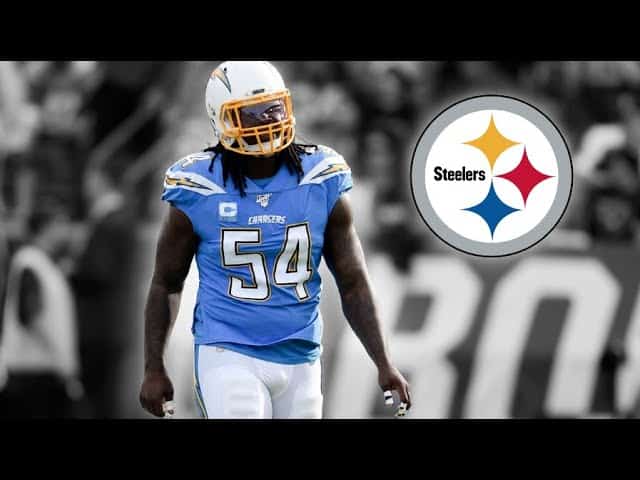 The Pittsburgh Steelers covered a glaring need by providing depth and experience to their OLB room by adding former L.A. Charger Melvin Ingram. Ingram signed a 1yr/$4M deal to play on the opposite side of T.J. Watt and join forces with All-Pro caliber interior DL Cameron Heyward and Stephon Tuitt. The Steelers still have high hopes for 2020 3rd Rd Pick Alex Highsmith, but with “Big Ben” entering what seems like his last pro season, Pittsburgh could not waste any time replacing Bud Dupree’s production.

The Steelers boast one of the best DL’s in the NFL and have led the league in sacks each of the last 4 years. An already ridiculous unit got a lot stronger with the addition of former LA Charger Melvin Ingram.https://t.co/lzr82dC1pt https://t.co/0bTijd6ZFV

The Pittsburgh Steelers have had a very quiet offseason and have received plenty of backlash for neglecting their offensive line and refusing to add depth to the CB and EDGE positions. A lot of Steelers fans and NFL analysts wanted the Steelers to go after Justin Houston to help replace the void of losing $85M man Bud Dupree. However, the Steelers decided to go with a younger option in 31-year-old Melvin Ingram who’s coming off an injury riddled campaign and is hungry to reach another big pay day.

Before the 2020 NFL season even began, Ingram and the Charger’s struggled to work out a long term contract, which led to Melvin holding out a couple of practices before LA decided to fully guarantee his $14M salary. So Melvin Ingram’s lack of production in 2021 falls in line with the long list of players who underperform after holding out in the offseason. Unfortunately for Ingram, the main reason he couldn’t produce was because of a knee injury that landed him on the IR twice.

Lucky enough for the Steelers, Ingram struggling during 2020 season opened the door for them to add a Pro Bowl-caliber stud who can reach double digit sacks this season at only $4M. Ingram has become accustomed to playing the second fiddle thanks to the Chargers having Joey Bosa, but playing in Pittsburgh should make his job a lot easier since the pass protection will have to focus on TJ Watt, Heyward, Tuitt, Tyson Alualu, and more.

Melvin Ingram will also be very fresh in pass rushing downs thanks to the progression of Alex Highsmith and his ability to become an every down player. HC Mike Tomlin and DC Keith Butler have the opportunity to throw out some wild pass rushing packages that could have any Offensive Line in the NFL shook. The “Steel City” once again is well positioned to lead the NFL in sacks for what would become the 5th consecutive season after making their sole significant signing of the offseason.

The #Steelers are getting a potential top-tier EDGE in Melvin Ingram who’s very familiar with entering opposing teams’ backfields
pic.twitter.com/6dR8Dg4KRX