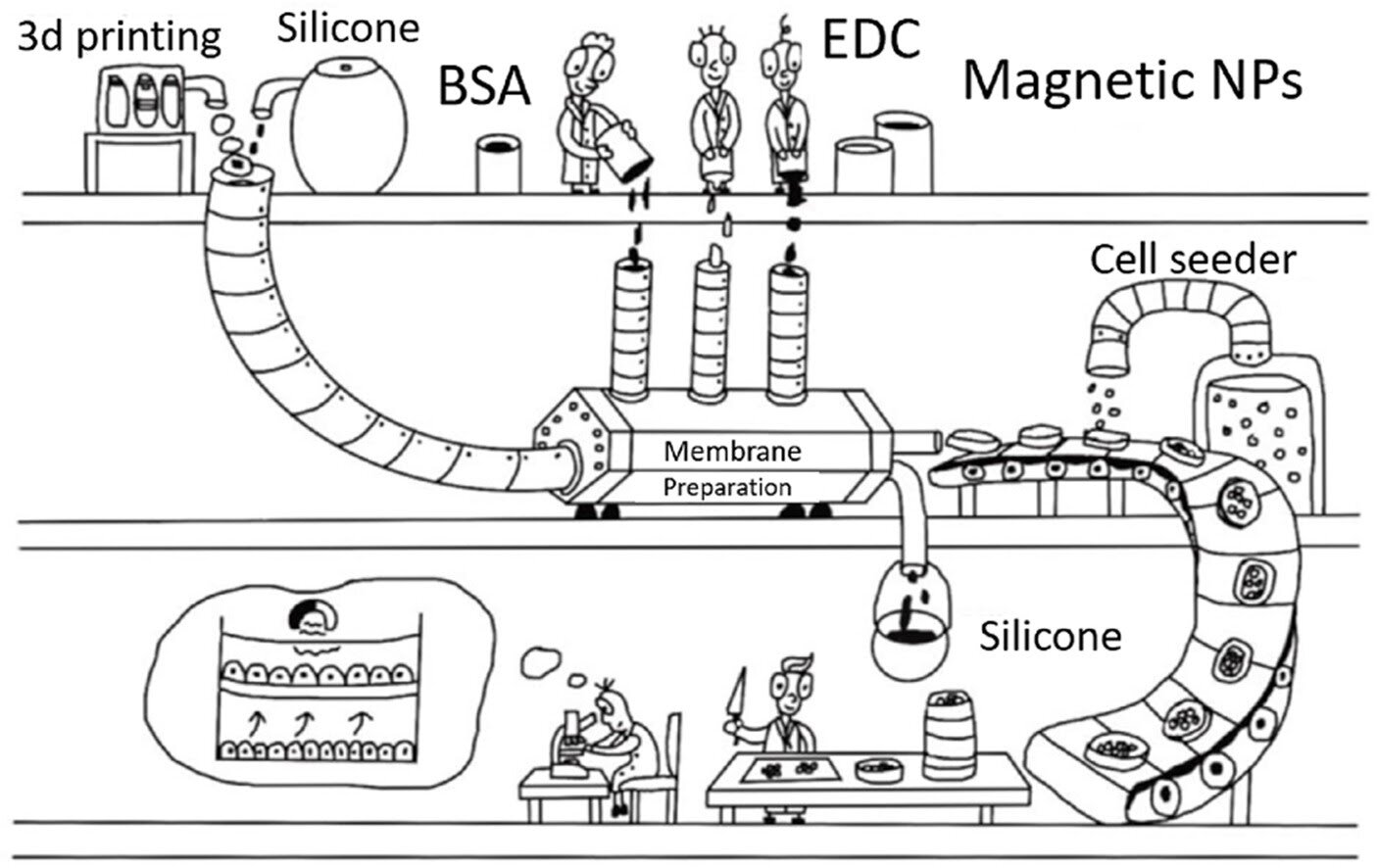 Scientists of the MIPT Cell Signaling Regulation Laboratory have developed a new low cost, reproducible system for the co-cultivation of cells. This system is based on a polymerized BSA membrane. Its size and relief are determined by a mold created using a 3D printer. The possibility of co-cultivation is achieved with magnetic nanoparticles (NPs). This NPs cross-linked into the membrane, which allows it to be kept afloat in a culture liquid using a constant magnetic field. The study was published in the journal Bioprinting.


To study how different cells influence each other, one should separate them in space first. The simplest model of cell co-cultivation is based on applying a so-called conditioned medium. Two cell populations are cultivated separately, then the culture medium that has been used to grow one of the populations is collected and used for another cell population. However, the problem with this model is that short-lived molecules are not stable in a conditioned medium and do not have time to transfer to the acceptor cell population. And consequently, this leads to the absence of feedback signals existing in natural conditions

One of the most significant achievements in the development of co-cultivation systems was made by Clifford Grobstein in 1953. He used permeable inserts with microporous membranes. Such systems for modeling changes in the cellular phenotype are presented by the “Transwell system”. The main disadvantages of commercially available systems are the high price and the inability to reproduce them independently in the laboratory. However, this problem can be solved using three-dimensional (3D) printing. This technology allows to quickly and properly produce specially designed devices for in vitro experiments with sufficient detail and accuracy.

Researchers of the Cell Signaling Regulation Laboratory at MIPT have developed their own co-cultivation system that is low-cost and reproducible.

Ilia Zubarev, leading researcher, senior research fellow at the MIPT Cell Signaling Regulation Laboratory, commented that they “decided to create a matrix based on a cross-linked protein. Such systems are often used to simulate biological matrices. To achieve the possibility of co-cultivation of various cells, we chose an original solution that had not been used before. To maintain the protein membrane above a certain height inside the vessel, we decided to saturate it with magnetic nanoparticles. As the main component of the membrane, Bovine serum albumin (BSA) was chosen. This protein is non-toxic, widely available, is actively used in various fields of biology, and, as a rule, is already available in any laboratory.”

The possibility of co-cultivation is achieved through the use of a system of magnetic support of the membrane afloat. For this, magnetic nanoparticles are added to the membrane, and a system based on permanent magnets is placed above the dish. Cells cultivated on the membrane retain their viability and can divide, the membrane can be fixed for histochemical or immunocytochemical staining, and the cells can be separated from the membrane for further study. The cost of the final membrane is about one US dollar, which is several times less than commercially available counterparts.The 3D printing method allows to flexibly and quickly adjust the manufacturing process to the needs of a particular laboratory. Such protein membranes can be made in any laboratory using a 3D printer and widely available general laboratory reagents.

Zubarev added that “at the bottom of the Petri dish, as on the membrane, different types of cells were grown. The membrane with cells were kept afloat in the culture medium. For several days, the cells exchanged signals with each other, and after that it was possible to assess their mutual influence. Such a co-cultivation system can be manufactured in any laboratory, and it is a cost-effective alternative to commercial tabs for cell co-cultivation.”

Cancer cells eat themselves to survive

Denial of responsibility! TechCodex is an automatic aggregator of the all world’s media. In each content, the hyperlink to the primary source is specified. All trademarks belong to their rightful owners, all materials to their authors. If you are the owner of the content and do not want us to publish your materials, please contact us by email – [email protected]. The content will be deleted within 24 hours.