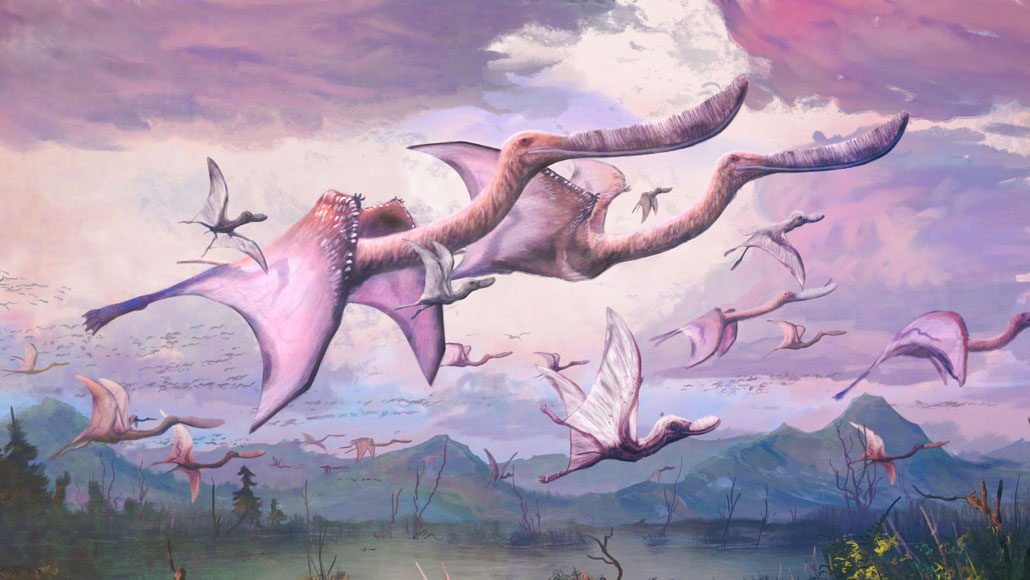 Pterosaur hatchlings may have been able to fly right out of the shell — although the flight of those ancient baby reptiles might have looked a bit different from that of the adults.

A new analysis of the fossilized wing bones of embryonic, newly hatched and adult pterosaurs suggests the baby creatures were strong and nimble fliers from the start, researchers report July 22 in Scientific Reports.

Pterosaurs were a diverse group of ancient flying reptiles that lived alongside dinosaurs from the Triassic to the Cretaceous periods, 228 million to 66 million years ago. The group includes Quetzalcoatlus northropi, the largest creature known to take wing, and Kunpengopterus antipollicatus (aka “Monkeydactyl”) which had opposable thumbs that enabled it to climb trees (SN: 4/14/21).

Scientists know relatively little about the early life history of pterosaurs, including whether their young could actively flap their wings or only glide — which might mean they stayed under parental care until they were flight-ready. But recent revelations increasingly point toward early independence, or “precociality,” for the reptiles, such as finding flight membranes on the wings of an embryonic pterosaur, and the discovery of a tiny Pteranodon juvenile that was capable of long-distance flying long before it had grown to adult size.

“Baby pterosaurs almost certainly didn’t glide,” they flew, says Kevin Padian, a paleontologist at the University of California, Berkeley, who was not part of the new study. The three keys to flight, he says, are strong bones, sufficient muscle mass to stay in the air for a long time and sturdy keratin fibers in the skin of the wings, analogous to the feathers of birds. “We know little about the last two.”

So researchers turned to the bones. Darren Naish, a paleontologist at the University of Southampton in England, and his colleagues compared fossilized embryo and hatchling wing measurements with those of adults from two species, Pterodaustro guinazui and Sinopterus dongi. The researchers analyzed wingspans, the strength of wing bones and how much load the wings could carry. In particular, they zeroed in on one wing bone, the humerus. That bone is found on the limbs pterosaurs use to launch themselves into flight and offers key information on whether a pterosaur was capable of getting off the ground.

The hatchlings’ humerus bones were surprisingly stronger than those of many of the adults, the team found. The hatchlings also had shorter and broader wings than the adults, suggesting they might have been capable of nimbly changing direction and speed, if not flying long distances (SN: 10/12/10).

Agile flying may have helped the hatchlings not only escape predators, but also chase tricky prey such as insects, all while navigating dense vegetation, the team suggests. Adult pterosaurs, less able to maneuver due to their size, may have then switched to more open habitats.

Among modern birds, the ability to fly immediately after hatching is almost unknown — with the notable exception of the maleo, a strange chickenlike bird that lives only on the Indonesian island of Sulawesi. The maleo’s ability to take flight right away helps it avoid being snapped up by the island’s various predators, from monitor lizards to pythons.

Still, it isn’t unusual in most of the animal world for young to be able to fend for themselves, Padian says. “Precociality is the rule, not the exception, in vertebrates,” he says. Only animals with extended parental care — like songbirds or primates — can afford to be helpless for any extended period of time.

Read original article here: Pterosaurs may have been able to fly as soon as they hatched

Read original article here: Pterosaurs may have been able to fly as soon as they hatched