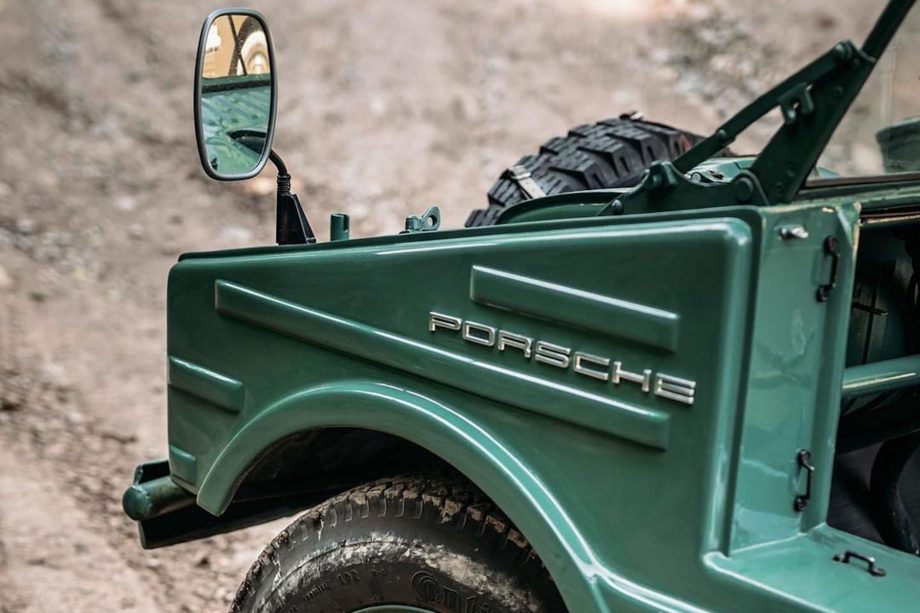 Some of the world’s coolest car brands and models have a military origin.

There are some obvious examples: Jeep, Land Rover, Hummer… There are also some less obvious examples, such as the Toyota Mega Cruiser, Citroën Méhari or the Lamborghini LM002 – a.k.a. ‘the Rambo Lambo’.

But one of the coolest ex-military vehicles is one that never made it to mass production, from a slightly more prestigious marque. Meet the Porsche 597 “Jagdwagen”: perhaps the most obscure Porsche model ever made.

Produced from 1955 to 1958, the Jagdwagen (German for ‘hunting wagon’) was originally developed as a tender to the German Army after World War II. However, it never reached mass production, losing out to Auto Union (i.e. Audi’s) DKW Munga.

Powered by the same air-cooled flat-four from the Porsche 356, the vehicle only made around 37kW but could climb steep grades of up to 65%. Bizarrely, the car had no doors and high sills, which required passengers to climb over them to enter and exit the vehicle (probably why it lost out to the Munga); The upside of this basic design, however, meant that the body was buoyant and amphibious.

Dr. Ferdinand Porsche himself might have become famous for his sports cars, but he also designed/made many notable military vehicles, including the WWII-era Type 82 “Kübelwagen” (the Nazi equivalent to the Jeep), Tiger tank and Elefant tank destroyer.

Practicality aside, it looks cool as hell – and that big Porsche badge is a real selling point. Sadly, only 71 Porsche 597s were ever made, 49 of which were built for the civilian market, and none are known to be right-hand drive. Porsche have one on display in their museum in Stuttgart – which is about as close as you’re ever going to get to see one in the wild.

We reckon that if there were a few kicking around Down Under, however, they’d be hot property. We can’t imagine anything cooler to drive around Byron or Bondi in. That said, you’re not entirely without 597-esque options as an Australian motorist.

RELATED: The Truth About Australia’s Most Vilified Motor Vehicle

Or what about this oddball buggy that’s the spitting image of a Humvee? The world’s your oyster…

Denial of responsibility! TheTopMag.com is an automatic aggregator of all media around the world. In each content, the hyperlink to the primary source is specified. All trademarks belong to their rightful owners, all materials to their authors. If you are the owner of the content and do not want us to publish your materials, please contact us by email – jamesonline999@gmail.com . The content will be deleted within 72 hours.
LifestyleNews and Media
Share
You might also like
#Lifestyle